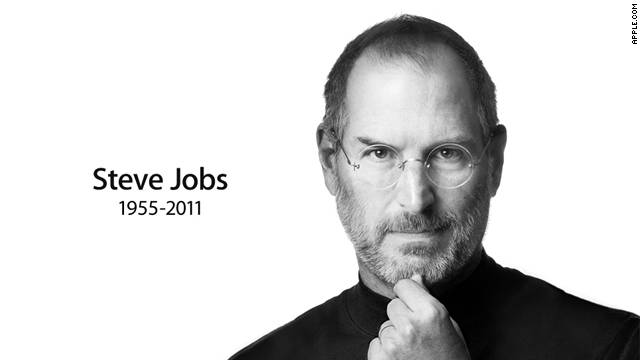 Apple's website remembers founder Steve Jobs with a dedication on their homepage mourning the loss of a "creative genius."
October 6th, 2011
11:38 AM ET

Apple's visionary founder Steve Jobs passed away Wednesday at the age of 56 after a long battle with pancreatic cancer. Today we pay tribute to Jobs' legacy as we look back at some of the most memorable moments from his life.

Apple’s dedicated founder – In June 2011, Steve Jobs made one of his last public appearances at a Cupertino City Council meeting while presenting plans for a new Apple campus. Despite reports of being ill, Jobs brought his humor and vision and continued to show his dedication to the company he loved.
[cnn-video url="http://www.cnn.com/video/#/video/us/2011/10/06/bts-jobs-cupertino-city-council.cnn"%5D

Jobs: Live each day like it's your last – In 2005, Steve Jobs spoke poignantly about his cancer diagnosis and confronting death. Here, Jobs discusses how being faced with his own mortality inspired him to make the most of his time on Earth.
[cnn-video url="http://www.cnn.com/video/#/video/tech/2011/10/06/jobs-stanford-commencement-dying.cnn"%5D

The creative genius behind Apple – Steve Jobs was Apple's passionate pitchman. Over the years, Jobs was front and center for the unveiling of many of Apple's greatest inventions, most often wearing his classic uniform of blue jeans and a black turtle neck. Steve Jobs' enthusiasm and wit were evident every time he took the stage.
[cnn-video url="http://www.cnn.com/video/?/video/us/2011/08/24/bts.steve.jobs.apple.timeline.cnn"%5D

To see more on the life and legacy of Steve Jobs, look back at some of his most memorable moments , hear from those who were closest to him and take a look at the impact his creative spirit has had.

Share your thoughts and memories in the comments section below or at iReport.com.