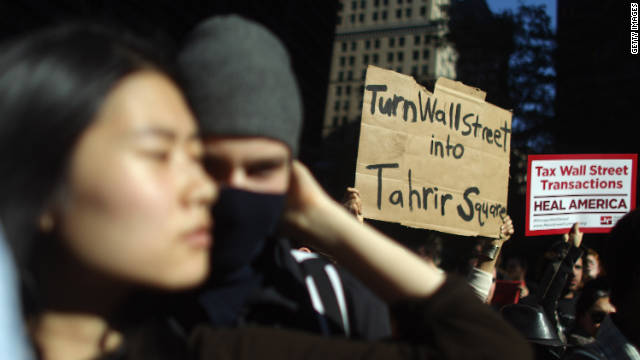 Exchange of the morning:

"Bored and boring kids, professional protesters, entitlements mongers and Unionistas do not represent any significant portion of America." - Steve1o

"That's what they said about the tea party when it first started." - voter51

The Occupy Wall Street rally appeared to pick up steam Wednesday as more protesters joined, including supporters from unions, but many CNN.com readers struggled to define the point of the demonstrations.

stevebr1956 said, "Seems like the left has once again gotten the cart before the horse. When you are angry enough to protest, wouldn't the first thing be about what they are protesting against?"

Bama918 said, "I think a comparison to the tea party movement is more apt than a comparison to the Arab Spring. I find the whole idea of the Occupy (Wherever) very compelling: They are saying things this country has been ignoring and sweeping under the rug too long. My criticism is that the movement needs to evolve a clear message and set of goals."

OWS replied, "This movement is about
1. Democracy. We demand that the government be truly responsive to those it represents. We demand an end to the massive corporate influence blocking the voice of the people by eliminating corporate personhood and limiting monetary contributions to political campaigns and lobbying.
2. Economic security. We demand effective reforms to prevent banks and financial institutions from causing future economic crises.
3. Corporate responsibility. We demand strict repercussions for corporations and institutions who cause serious financial damage to our country and its taxpayers.
4. Financial fairness. We demand tax reforms to ensure that corporations and the wealthy pay their fair share in taxes."

Safer said, "This is not about liberalism, this is about corruption, greed and a dysfunctional government. OLD school says, 'Your vote will make a change.' That does not work any longer because both sides are the same."

shmuckell said, "I went from being interested in what may come of this, to being absolutely disgusted. The people behind this are adbusters dot org, socialist activists out of Canada. There are huge problems in our system that require solutions. These Canadian activists do not provide solutions; they specialize in culture jamming."

Texan13 said, "A great American once said, 'A house divided against itself cannot stand.' Today protesters are camping out on Wall Street and other major cities across America. The division between rich and poor has never been greater. Corporations are moving operations overseas in
order to increase profits and avoid taxes. Politicians are failing to hear the voices of 'We the People.' "

Doorgunner47 said, "This is America's answer to the corporate-funded tea party. Taking back our power, one street at a time."