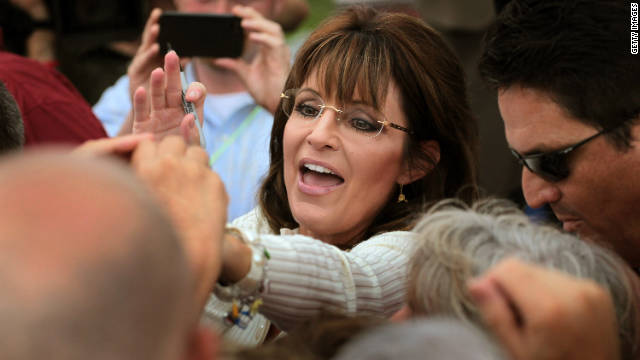 Overheard on CNN.com: No, LZ, Palin really is a fool

"I never once thought of it this way. Sarah Palin truly is a political/financial/social genius. I always thought she was an idiot. But she has nearly infinite fame in this nation, and she has hardly accomplished a thing since she resigned from governor. My hat is off to her." - KGColorado

Palin will not seek presidential nomination

Sarah Palin is charismatic, beautiful and a leader, writes CNN.com columnist LZ Granderson. By deciding not to join the race for the GOP nomination, she can "continue to influence national politics" without having to make a decision or offer solutions. And that, he says, makes her smart. Some CNN.com readers were intrigued by the idea, but most disagreed.

4sanity said, " 'Palin represented a brand of conservative politics that was Twitterable and ... instrumental in the rise of the tea party.' Emphasis on the Twit part."

dmnewberg said, "I disagree with you, Mr. Granderson, about Sarah Palin's popularity. While wildly popular among T-Party members, polls have shown she has low approval ratings among even Republicans."

Many replied to Jray01, who asked, "If the left had to think of one thing they hate most about Palin what would it be? What makes her so unlikable?"

NoFoolJule said, "Jray, she is a complete idiot. Which of her policies do you like, or are you just into soundbites?"

glynnmack said, "Her 'Christianity' isolates anyone who doesn't share her very specific beliefs. She lacks depth and speaks only in talking points. That this lack of substance can appeal to people is what many dislike about her. The dislike is both for her and the people who idolize her."

AGoodwin said, "When so many were making racial remarks about Obama at some of her events, she never once confronted them to tell them that it is wrong. She would bring her Evangelical pro-life movement to the White House. I also think that she is very divisive in her own party."

BigLebowskii said, "I LOL at Palin, in the heartiest manner possible. Her profound ignorance of all logic and reason is embarrassingly hilarious. I thank Palin for all the laughs! Her running for President was either one of two things, she was either trolling us or suffering from severe dementia. Either way this will make a great premise for a comedy movie titled 'President Palin'."

Cain: Not rich? No job? Blame yourself

Big Banks and Wall Street are not the problems: "If you don't have a job and you're not rich, blame yourself," GOP candidate Herman Cain said in an interview with the Wall Street Journal. CNN.com readers were almost universally appalled.

Trenee' said, "Our CEO was making $26,000 a week; that was my annual salary. They laid me off to save money. Cain should go back to pizza."

rs said, "Wow! So, the Republicans crash the economy, lose millions of jobs, do nothing to create jobs or help the middle class. Then Cain says it's our fault if we don't have a job or we aren't rich. Unbelieveable! They are so out of touch! The GOP/Tea party economic terrorists gunning for you!"

Orchid333 said, "So when my 64-year-old mother was laid off from a company that she'd worked at for 8 years, that's somehow HER fault? Saying countless small businesses (and my friends) went under and had shut their doors because of their own misgivings is absolute absurdity! They couldn't get bank loans, they couldn't get new business, they couldn't go on with no income thanks to the '08 economic failure, and for Cain to somehow blame them is by far the most idiotic thing I've heard yet."

But there were a few who agreed with him.

Randy said, "Amen to Cain. As long as there are 'Help Wanted' signs out, or classifieds in the paper, it shows there are lazy people out there. I agree with many of you that the initial lay off may not be an individual's fault, but being out of work for 2 years is just a plain failure on your part. You really do need to look in the mirror."

Doug said, "When you have 100K in student loans and a liberal arts degree, then you should blame yourself."

But Robita replied, "Can you tell me what engineers like myself should have done to prevent our jobs being sent overseas? Because when I became an engineer in the 90's it was a solid career move. Doug, you are an idiot who I hope gets to experience some hard times soon, because I'll tell ya brother, unless you are a millionaire, you are not bulletproof in this day and age."

Greg said, "Herman Cain is a cool dude. A true breath of fresh air and a guy that actually has ANSWERS to America's problems." Jilli replied, "So FU is an answer to America's unemployment issues? Wow. I want MY country back."