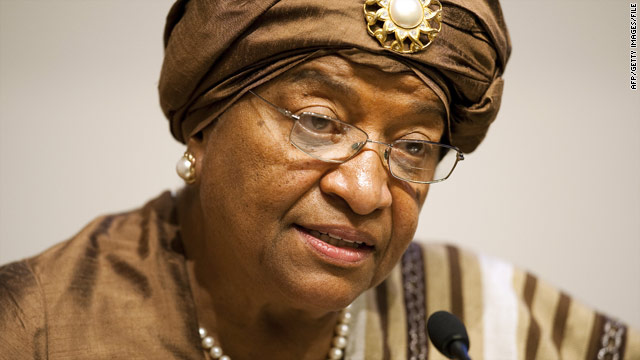 This year's Nobel Peace Prize is divided among three women, Ellen Johnson Sirleaf and Leymah Gbowee of Liberia and Tawakkul Karman of Yemen, the Nobel committee in the Norwegian capital, Oslo, announced Friday.

The women were awarded the prize "for their nonviolent struggle for the safety of women and for women's rights to full participation in peace-building work," the committee said.

"We cannot achieve democracy and lasting peace in the world unless women obtain the same opportunities as men to influence developments at all levels of society."

She is campaigning for re-election.

Medina Wesseh, chairman of her re-election campaign, told CNN the award was greatly deserved "for all of her life's works and activities, for the women of Africa, for the Liberian people and for the world at large."

The Harvard graduate's commencement address in high school in 1972 sharply criticized the government, a rare defiance in Africa, especially at the time.

Johnson Sirleaf has also worked at the World Bank and the United Nations.

Gbowee, a founder and executive director of Women Peace and Security Network-Africa, was also a recipient in 2009 of the John F Kennedy Profile in Courage Award.

She was the focus of the documentary "Pray the Devil Back to Hell," which shows how women confronted Liberian President Charles Taylor with a demand for peace to end a bloody 14-year civil war.

She "mobilized and organized women across ethnic and religious dividing lines to bring an end to the long war in Liberia," the Nobel committee said.

And in Yemen, Karman has played a leading role in the struggle for women's rights for democracy and peace, the committee said.

The Norwegian Nobel Committee said it hoped that the prize will help end suppression of women in many countries and to "realize the great potential for democracy and peace that women can represent."

4:15 am ET December 5, 2021 RETWEET
Rover.com released its ninth annual report on the year's most popular pet names, which include thoseŌĆtwitter.com/i/web/status/1ŌĆ”aD
cnni

4:00 am ET December 5, 2021 RETWEET
The death of a Sri Lankan woman who was detained after overstaying her visa has made headlines in Japan and fueledŌĆtwitter.com/i/web/status/1ŌĆ”md
cnni

3:44 am ET December 5, 2021 RETWEET
Calling all filthy animals: Airbnb is renting the iconic "Home Alone" house for one night only this monthŌĆtwitter.com/i/web/status/1ŌĆ”FY
cnni