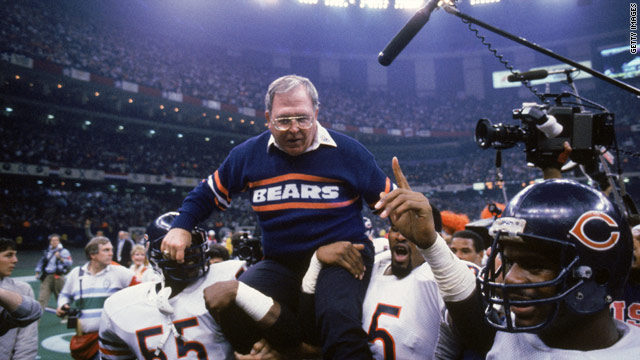 Defensive coordinator Buddy Ryan of the Chicago Bears gets carried off the field by defensive lineman Richard Dent #95 and teammate as they celebrate their victory over the New England Patriots in Super bowl XX
October 7th, 2011
11:07 AM ET

It's a long-standing tradition that championship-winning sports teams get invited to the White House.  The Super Bowl 20-winning Chicago Bears are no exception.  In 1986, the Bears were scheduled to meet President Ronald Reagan at the White House to celebrate their big victory. However, just days after the championship, space shuttle Challenger blew up and their trip got cancelled.  Today, 25 years after their scheduled visit, that Chicago Bears team is finally going to the White House. In honor of this long-awaited and well-deserved honor, we at Gotta Watch put together some videos of people who had to wait a long time to get something.  While waiting may be the hardest part, some rewards are worth waiting for.

A piece of her late father - It's not often that people leave messages for their loved ones in a bottle and toss it in the sea.  It's even less often that a person receives that message five decades later.  Check out the story of a New Hampshire woman who, through a strange turn of events, is reunited with a note from her late father.

Worth the wait - Of all the military decorations, the Medal of Honor is the highest. This war hero who fought in Laos in 1968 had to wait four decades to receive his Medal of Honor, but as you can see in this video, he finally gets the recognition he deserved.

Flushed, but never forgotten - Seven decades ago, this man flushed his class ring down the toilet. Check out how he got it back so many years later.