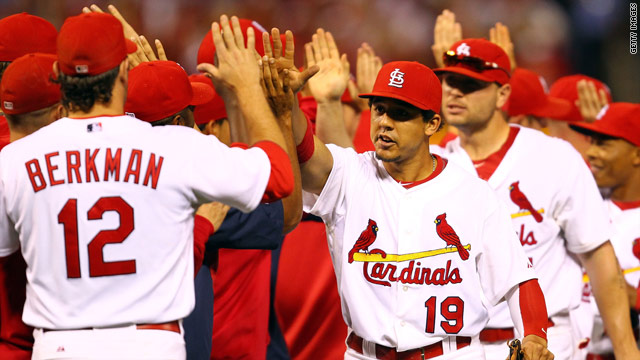 The St. Louis Cardinals celebrate Wednesday after beating the Philadelphia Phillies in Game Four of their series.
October 7th, 2011
06:31 AM ET

At 5:07 p.m. ET, the Arizona Diamondbacks visit the Milwaukee Brewers. Trends would seem to make the Brewers the favorites in this one. The home team has won the previous four games in the best-of-five series. SI.com's Joe Lemire takes a look at the stats and the momentum shifts in this series.

At 8:37 p.m. ET, the St. Louis Cardinals visit the Philadelphia Phillies. The Cardinals got into the playoffs on the final day of the regular season, when they beat Houston and the Atlanta Braves lost to the Phillies in extra innings. Philadelphia was the preseason favorite to represent the National League in the World Series. SI.com's Ben Reiter writes that if the Cardinals can get contributions from some of their lesser-known players as they have so far in this series, they could send the Phillies home without championship rings.

Prostate screenings: The U.S. Preventive Services Task Force will soon recommend that men not get screened for prostate cancer, according to a source privy to the task force deliberations.

The task force is set to recommend a "D" rating for prostate specific antigen, or PSA, testing. Such a rating means "there is moderate or high certainty that the service has no net benefit or that the harms outweigh the benefits," according to the group's website. The task force is set to propose this recommendation Tuesday, and then allow for a comment period before issuing a final recommendation.

According to a draft copy of a report scheduled to be released Monday, a review of studies shows screening with the PSA blood test results in "small or no reduction" in prostate cancer deaths.

Korea curfew: U.S. troops in South Korea face a 3 a.m. to 5 a.m. weekend curfew for the next month after two U.S. service members have been accused of rapingÂ  local girls in the past month.

The commander of U.S. Forces Korea, Gen. James D. Thurman, said the curfew would be in place from midnight to 5 a.m. Monday to Friday and from 3.a.m. to 5 a.m. on Saturday, Sunday and holidays. It will be in place for the next 30 days, Thurman said.

"Given the incidents that have occurred over the last several months, I'm reinstating the curfew to assess current conditions," Thurman said.

Military officials had rescinded the previous curfew on July 2, 2010. That curfew had been in place for nine years.

RT @Acosta: What Tucker Carlson is doing by peddling â€śreplacement theoryâ€ť and other white nationalist talking points is dangerous and we caâ€¦
susancandiotti

To bathe or not to bathe (often). That is the question. cnn.it/3wwAd80
cnni

12:00 am ET May 16, 2022 RETWEET
RT @Acosta: What Tucker Carlson is doing by peddling â€śreplacement theoryâ€ť and other white nationalist talking points is dangerous and we caâ€¦
susancandiotti

11:19 pm ET May 15, 2022 RETWEET
The Formula One season is only five races old, but it already has a different complexion compared to previous years. cnn.it/3LkUR02
cnni

11:15 pm ET May 15, 2022 RETWEET
While authorities identified the victims, details about who they were and the lives they lived have just started toâ€twitter.com/i/web/status/1â€¦od
cnni