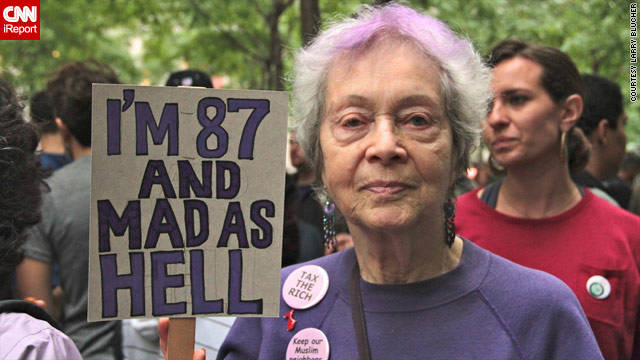 Overheard on CNN.com: We are responsible citizens!

"This is wonderful to see. A non-violent civil war." - Funktologist

"We have the best government money can buy, and it's all bought." - WolfRayet

Protesters across the U.S.: Who are they?

Occupy Wall Street protests are spreading across the country. In response to accusations of being "lazy hippies," diverse CNN.com readers commented in iReport's Open Story about who they are and why they support the protests.

ceejay0214 said, "I am 68 amd I too am mad as hell! I am furious that the media keeps focusing on the tea party. Thank God for a movement that I can embrace. I have felt I have been left in the dark while the whole country embraces this cult-like extremism of this new Republican party. It has turned into a country of the rich get richer, the poor get poorer and our Congress seems to think this is OK."

JLOC26 said, "I was there last night and as a graduate with a Masters degree I can tell you that not everyone marching last night was a 'dirty hippy' as you all are so fond of saying. In fact, the march specifically included unions and families. Are we now against unions in this country? Do families who show up to show there support for a cultural change now fall into the 'dirty hippy' category?"

teacher87 said, "What is with the name calling? I am an older female working in the healthcare industry as well as teaching and I believe the protestors have every right to be there. These protestors are union members, young people and mostly Democrats who want Congress to finally do something to help with jobs. Many of these people have jobs but want to help their neighbors and family members who are not able to find work."

fishngal said, "Many of us are elderly and responsible citizens that are fed up with radical Tea Party politics, governing on social prejudices and beholden to big money interest while the poor get poorer, and nothing is done to assist them in a frustrating financial climate. Yes, we are mad as hell! Better wake up soon big shots! You need us. We are a sleeping lion."

mrshrink said, "I talked to a group of protesters in Colorado Springs over the weekend. They are quick to express that they are bi-partisan. And even if they aren't, while I was there, I heard nothing but shouts of support from each passerby. And statistically, in Colorado Springs, their majority is right of center and probably military. This is far more inclusive than the Tea Party ever was, people."

siss said, "I sympathize with this protest and am middle-age, full-time working, law-abiding and active in my community. It's through this community work that I found out how corporatations bought the policitians and changed the rules so no longer does the common man have a chance to control our own future. I will be participating the Occupy San Diego protest, on my lunch hour!"

spark63105 said, "I'm at work too. Supporting my grown children because they cannot find meaningful work. I support this movement. I see them fight everyday to make it but the game is rigged. I worked hard to get to where I am but I also had a chance. Young people today do not."

ljia said, "I am proud of the young Americans taking up this cause. It reminds me of the anti-Vietnam protest which changed the course. Yes we can with a peaceful movement. Real change, however, comes at the ballot box."

NYYFan1 said, "I work for Morgan Stanley, so naturally, I cannot be a part of this rally; I truly hope, however, this will bring about the demise of the right-wing radical extremists who call themselves the Tea Party. These Tea Party neo-fascists are destroying our nation, tearing it apart piece by piece."

Whazzup1025 said, "I spent my entire career in the tech industry and suddenly one day, I had no jobs at all. But the H1-B visa workers were still working. A law that was meant to fill in the gaps in America not having enough tech workers turned into the tech workers being mostly visa workers. So yeah, I believe in America rising up to put the big guns in their place. It's the big guns who send our jobs elsewhere and sell 'paper dreams' on Wall Street."

60stwice said, "I've been waiting for 2 years for the people to turn to our basic right to public demonstrations & protests. Welcome, grandchildren. Keep up the pressure and the establishment will bend to the rule of the people. Now, where are my flowers...."