A new hurricane emerged Saturday in the eastern Pacific Ocean, prompting the National Hurricane Center to urge those along Mexico's southwestern coast to track its progress as it crept toward shore.

Hurricane Jova had maximum sustained winds of 75 mph as of 2 p.m. PDT (5 p.m. EDT) Saturday, with the Miami-based center predicting it would get even stronger over the next 48 hours.

The storm's eye was located south of Mexico's Baja California and 440 miles (710 kilometers) west-southwest of Manzanillo. It was heading slowly, at 3 mph, to the east-northeast.

Tropical-storm-force winds - measured at 39 mph or stronger - were recorded 90 miles out, the center reported.

No coastal warnings or watches are currently in effect due to the system, though the hurricane center is advising people in the general area to monitor its movement.

Award-winning pianist Roger Williams, who played before nine U.S. presidents and recorded dozens of albums over his long career, died early Saturday in Los Angeles after a struggle with pancreatic cancer, his assistant said. He was 87.

Jacque Heebner, Williams' personal assistant who said she had known the musician for 77 years, said she was with him inside his home when he died. Even into his final weeks, Williams continued to perform and to champion such causes as music education. He had recently released an album and was under contract for three more, she said.

"There was never a man with a more tender, gentle heart," Heebner said. "He was a charming man, even at the age of 87."

Congenital amputee Kyle Maynard is taking his "no excuses" mantra to the next level, training for a Mount Kilimanjaro climb that will be his biggest endurance test to date.

The athlete and motivational speaker talked by phone Saturday from the Appalachian Mountains of North Georgia, where he had completed a five-mile hike in forested conditions akin to the lofty heights of Tanzania.

"I've never done anything that lasted this long," he said of the intense training for the January expedition.

Less than a week after the arson of a mosque in northern Israel, dozens of Christian and Muslim graves were vandalized in an Arab section of the Israeli city of Jaffa.

More thahan 100 graves were vandalized in the Muslim cemetery of al-Kazakhana and at a nearby Christian cemetery in the Ajami neighborhood of Jaffa, according to residents and a CNN producer who visited the locations.

Some of the graves were spray painted with graffiti while others were smashed.

Residents say the vandalism took place Friday evening as the Yom Kippur holiday was beginning in Israel, but police suggested it might have taken place a day or two prior.

Undocumented immigrant students will be eligible for California aid

Undocumented immigrant students in California will be able to receive state-funded financial aid in 2013 to attend college under a new law signed Saturday by Gov. Jerry Brown.

The law allows top students who are on a path to citizenship to apply and receive the state aid, the governor said.

About 2,500 students are projected to receive Cal Grants totaling $14.5 million, according to the California Department of Finance. That averages out to $5,800 per student.

The funding amounts to 1% of the overall $1.4 billion Cal Grant program, officials said.

The new law, AB 131, is one of two pieces of legislation known as the California Dream Act and will become effective January 1, 2013, officials said. 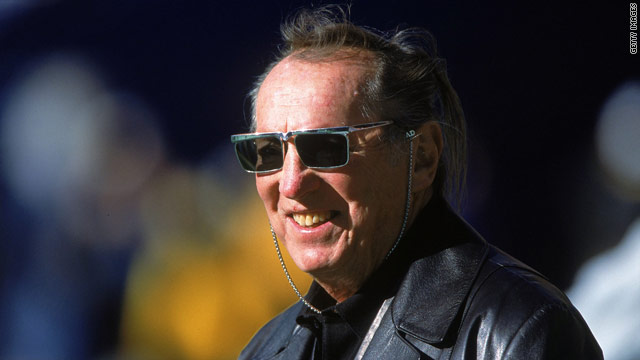 Oakland Raiders owner Al Davis, who had a storied career in professional football as a coach, commissioner and owner, died Saturday, the team said. He was 82.

In a brief post on their website, the Raiders said a statement would be issued later in the day.
The cause of death was not immediately released.

Much of Davis' career was spent in Oakland, where he first arrived as a coach in 1963 - tasked with turning around a team that was picked to be at the bottom of the standings. The results were almost immediate, finishing 10-4 that season, and Davis was selected as coach of the year.

At 33, he was both the coach and general manager of the Raiders, the website said, making him the youngest person to hold that dual position.

Davis was inducted into the Pro Football Hall of Fame in 1992.

According to the Hall of Fame website, Davis "is the only person to have served pro football in such varied capacities as (1) a player personnel assistant, (2) an assistant coach, (3) a head coach, (4) a general manager, (5) a league commissioner and (6) the principal owner and chief executive officer of an NFL team."

Police in Poland have arrested two men in connection with explosions at Ikea stores in several European countries, they said Saturday.

They were arrested after a joint operation involving several hundred officers from Poland's Central Investigation Bureau and investigators from other countries, police said in a statement.

There were eight explosions of increasing strength between May and early September, at large stores in France, Belgium, Holland, Germany and the Czech Republic, police said.

Initially the explosions were treated as individual cases in the countries where they occurred, but police now believe the plot was orchestrated from Poland, the statement said. The suspects made use of technology and traveled large distances to try to avoid detection in Poland, it added.

The men have been accused of racketeering and extortion offenses, as well as endangering people's lives.

Gunfire killed at least one person Saturday at as the funeral of an assassinated Kurdish opposition leader in northeast Syria turned into a protest, activist groups say.

Mashaal Tammo, a spokesman for the Kurdish Future Party and a member of the newly formed Syria National Council, was shot dead Friday at a private residence in the northeastern city of Qamishli.

The London-based Syrian Observatory for Human Rights said two people were shot dead at his funeral and three injured, while the opposition Local Coordination Committees (LCC) of Syria said one person died, with more injured.

The Syrian Observatory said after the funeral, more than 50,000 people joined a mass demonstration demanding the overthrow of the government of Bashar al-Assad.

A general strike was also being staged in Qamishli to mourn Tammo, the LCC said.

The state-run Syrian Arab News Agency (SANA) reported Friday that he was killed by "an armed terrorist group." Local activists said he was slain by members of a pro-government militia.

Catherine Ashton, the European Union's foreign affairs chief, condemned the assassination "in the strongest terms," in a statement Saturday.

"Mr. Tammo's death follows other targeted assassinations in the past days, which are totally unacceptable. These appalling crimes further add to the EU's grave concern over the situation in Syria. All those responsible for and complicit in these crimes must be held accountable," the statement said.

Ashton also condemned the beating of opposition leader Riad Saif and urged an end to all violence to allow for a peaceful transition to democracy.

A White House statement Friday said Saif was subjected to a "vicious and unprovoked assault."

On May 21, 2022 Tom Turcich, from New Jersey, became the 10th person on record to walk around the entire world, whiâ€twitter.com/i/web/status/1â€¦3P
cnni

On May 21, 2022 Tom Turcich, from New Jersey, became the 10th person on record to walk around the entire world, whiâ€twitter.com/i/web/status/1â€¦3P
cnni