Much-needed rain fell across drought-stricken Texas on Sunday, offering relief but no end to what's been one of the state's driest years on record.

Some areas received more rain in a day than what had fallen all summer.

Waco, Texas, where temperatures hit at least 100 degrees Fahrenheit 78 days this year, received 5.83 inches of rain, according to the National Weather Service. Dallas got 1.37 inches of rain, while San Antonio received 3.06 inches - a record for the date.

The weather service forecast rainfall amounts over the central and southern Plains of 1-3 inches per hour, with totals of more than 10 inches possible in some places by Monday morning.

California Gov. Jerry Brown signed into law Sunday a bill that prohibits most teenagers from getting bronzed in tanning beds, making the Golden State the first to do so.

State Sen. Ted Lieu said he first tried, and failed, in 2007 to make it illegal for people between the ages of 14 and 18 to walk into a facility and use ultraviolet beds to tan. Four years later, his effort finally paid off.

"I feel great," Lieu told CNN of the bill's passage. "I believe it will help save lives and prevent unnecessary suffering."

Presidents of Sudan, South Sudan vow to resolve issues with talks, not war

On his first visit to Khartoum since his fledgling nation declared independence, South Sudanese President Salva Kiir agreed with his Sudanese counterpart to hold talks to "reach final solutions" to address continuing differences between their countries.

"My government is ready to discuss and reach final solutions on all outstanding issues - mainly the economy, security, borders and Abyei status," Kiir told reporters Sunday.

"We shall work on all these outstanding issues and make sure we sign a final agreement on all of them as soon as possible."

After years of violent strife and a January referendum paving the way for a new state, South Sudan separated from Sudan in July.

At least 20 people were killed Sunday when Egyptian army forces clashed with thousands of people protesting more than a week after the burning of a Coptic Christian church, officials said.

Dr. Sheriff Doss, the head of Egypt's chief association of Coptics, said that 17 civilians died and 40 were injured.

In addition, three army officers were killed and at least 20 were injured, according to Alla Mahmoud, an interior ministry spokesman.

The protesters - many of them Coptics or supportive of their cause - had been marching peacefully toward the Egyptian state television building, demanding equality and protection of Coptic places of worship. 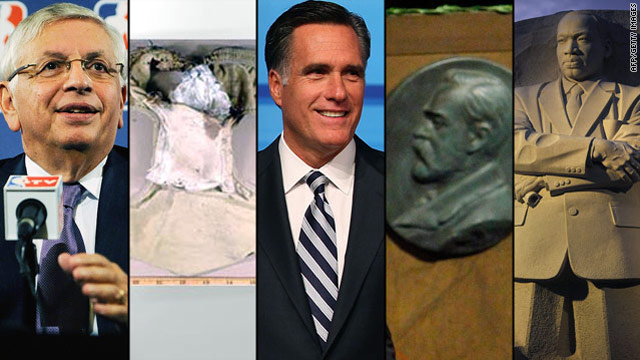 Economic and money issues are front and center in the coming week.Â The focusÂ begins early Monday, when the Nobel Memorial Prize for economics is awarded in Sweden, and wraps up next weekend when a coalition of religious, civil rights and education groups join labor unions in a march on Washington for "jobs and justice." In between, the NBA faces a deadline for a labor agreement, and Republican presidential candidates will debate about the economy.

Nobel Memorial Prize for economics to be awarded

The Nobel Memorial Prize in Economic Sciences will be announced Monday morning by the Royal Swedish Academy of Sciences.

The economics prize was established in 1968 by Sweden's central bank in memory of the founder of the Nobel prizes, Alfred Nobel. It has been awarded 42 times to 67 laureates.

Last year, three men - Peter A. Diamond, Dale T. Mortensen and Christopher A. Pissarides - shared the prize for their work developing models that help people "understand the ways in which unemployment, job vacancies, and wages are affected by regulation and economic policy," according to the academy.

You can watch the webcast of the announcement here at 7 a.m. ET.

The National Basketball Association needs a labor agreement between owners and players by Monday night, or league Commissioner David Stern is expected to cancel the first two weeks of the regular season.

Talks between the players union and the owners stalled last Tuesday, even though reports said the two sides had gotten closer to a revenue split they could both accept.

According to a report from SI.com's Chris Mannix, the NBA offered the players a 50-50 split of all basketball-related income. But players union sources disputed that number, saying the split was 49-51 in favor of the owners and that the owners rejected a counteroffer from the players. The talks then ended and no new meetings were scheduled.

END_OF_DOCUMENT_TOKEN_TO_BE_REPLACED

"Syria will take strong measures against any country that recognizes the opposition council formed in Turkey," he said, referring to a new alignment of Syrian opposition groups, the Syrian National Council, formed in Istanbul.

Former Beatle Paul McCartney is set to walk down the aisle a third time, marrying girlfriend Nancy Shevell in London.

While the couple has not publicly announced the date of the wedding, British press reports say it will happen Sunday.

The pair got engaged in May, a McCartney representative told CNN at the time.

She later died of cancer.

McCartney's second marriage - to model Heather Mills - ended in a bitter divorce in 2008 after four years. They have a daughter, Beatrice.

The ailing actress was taken from her home to UCLA Ronald Reagan Medical Center, her daughter Francesca Hilton said. She did not provide details.

Gabor has suffered major health problems in the last year, including hip replacement surgery and a leg amputation. She has been unable to walk since a 2002 car accident.

Hurricane Jova expected to intensify as it inches toward Mexico

Jova, the newest hurricane to form in the Pacific Ocean, inched toward western Mexico early Sunday and is expected to intensify over the next two days.

As of 8 p.m. PT Saturday (11 p.m. ET), Jova was about 405 miles (655 kilometers) west-southwest of Manzanillo, Mexico, according to the National Hurricane Center in Miami. It was crawling east about 5 mph (7 kph), and is expected to turn northeast later Sunday.