The DOJ has added a third person to a major federal criminal case that accuses members of the Proud Boys of breakinŌĆtwitter.com/i/web/status/1ŌĆ”ck 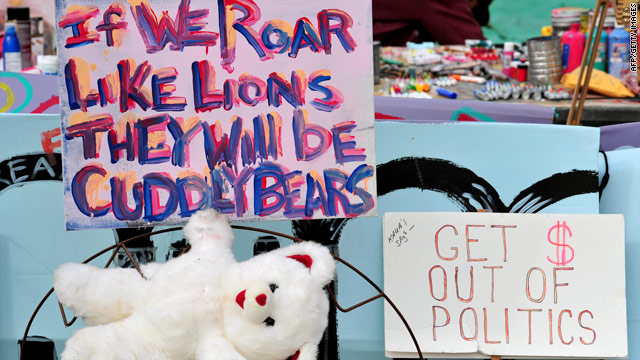 David Pitman, a protester in Somerville, Alabama, said the movement is not partisan and will remain resilient. ┬Ā"We refuse to play party games, and we won't re-elect liars and scoundrels," he told CNN in an e-mail Monday. "And we want justice, impartially, (for) the rich AND poor."

On Monday, the Rev. Al Sharpton broadcast his syndicated radio show┬Āin New YorkŌĆÖs Zuccotti Park, the epicenter of the protests.

Also, Ben & JerryŌĆÖs issued a statement of solidarity with the Occupy Wall Street movement over the weekend, saying, ŌĆ£The inequity that exists between classes in our country is simply immoral."

ŌĆ£We realize that Occupy Wall Street is calling for systemic change. We support this call to action and are honored to join in this call to take back our nation and democracy,ŌĆØ the ice cream company, which is known for championing liberal causes, said on its website.

1,326┬Ā- The number of cities where Occupy protests were planned as of Monday. Aspen, Colorado; South Bend, Indiana; and Fort Worth, Texas, were among several cities preparing for rallies Monday, according to OccupyTogether.org, an unofficial hub of the movement.

32 - The number of protesters arrested early Monday outside the Iowa Capitol, state public safety department┬Āspokeswoman Jessie Lown said. "They did not have a permit," she said, adding that ŌĆ£they still have a right to gather there, sing songs, have picnics whatever.┬ĀBut they have a right to be there until 11 oŌĆÖ clock, when the park closed and they were warned multiple times.ŌĆØ