One of the four people held hostage for hours inside of a Texas synagogue has been released, according to local polŌĆtwitter.com/i/web/status/1ŌĆ”pI

Law enforcement officials say the suspect in the hostage situation at a Texas synagogue may be motivated by a desirŌĆtwitter.com/i/web/status/1ŌĆ”ee 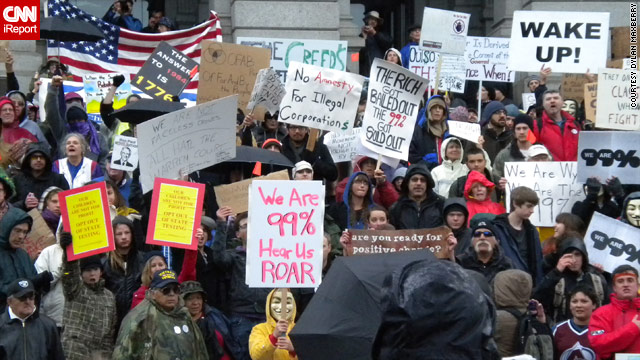 Comments of the morning

"Just about everyone interviewed is clearly saying they are sick of corporate America having the biggest voice in Washington. Did it occur to you that unemployment, homelessness, no insurance and cuts in education might actually be affecting your fellow human beings?"- omeany

"For starters, there needs to be term limits for Congress. Get the corporate lobbyist out of government. The elections need to based on a popular vote; one vote - no more, no less." - catty123

Opinion: Why "occupy"? It's personal

As it enters its fourth week, the Occupy Wall Street movement continues its spread across the United States. Responding to criticism that the movement lacks clarity about its aims, many readers at CNN.com offered their take, focusing on lack of economic opportunity and the disenfranchisement of the middle class.

Courser01 said, "I've been unemployed for 17 months now. My unemployment will run out soon. I'm 52 years old now and going back to school. I fully expect to be homeless for the first year of a radiology program and perhaps the second, depending on funding. I'm unspeakably furious that the GOP's stated mission is to unseat President Obama. Seriously?! That's their biggest concern in the face of the worst economic crisis since the Great Depression?"

tldixon said, "I'm protesting the fact that corporate CEOs get huge bonus or severance packages even when they screw the pooch. I'm protesting my enormous tax burden when big corporations are allowed to weasel out of their taxes. We're protesting in Santa Fe, New Mexico, to show solidarity: social and fiscal justice for all!"

Splicernyc said, "For me, (Occupy Wall Street) is about saying 'no' to a system that gives trillions to the very people who destroyed the economy while telling working people to sacrifice further. The Republicans are the most embarrassing because their talking point about 'job creators' falls flat when those jobs they are creating are everywhere except in the United States. The lies are getting old, and real Americans who struggle every day to make ends meet are tired of them."

dhazelwood said, "(Occupy Wall Street) wants all corporate, and private money out of our public officials' hands. They want our politicians to make decisions based on what is best for the American people and not for what is best for global corporations."

Jacquie1 said, "For all you people complaining that the protesters should shut up, go home and get a job, well maybe they would if there were any jobs out there. They might go home if they had homes that weren't under water or foreclosed on, and maybe they would shut up if our stupid bought-and-paid-for politicians would listen to what they are saying."

llliden4 said, "This is not all freaks and hippies protesting in their 20s. I have seen many people my age protesting. I hope to attend Occupy Columbus Ohio tomorrow. I am 54, middle class and a member of the APWU, AFL-CIO. I have had my job for 26 years. The powers that be want to break up all the unions so there is no collective bargaining. I personally do not see a middle class future for my kids."

Guest said, "I am a 57-year-old, professional, Southern white woman and IŌĆÖm madder than hell. I will be participating in the next Occupy Protest in Memphis (Tennessee). What about the rest of you? Is it going to take the lights going out and not being able to watch your favorite TV show to get you moving? Back in the industrial age, when what was good for General Motors was good for America, trickle down worked fairly well. Now itŌĆÖs just a yellow stream flowing to the middle class. We canŌĆÖt build a strong middle class on fast-food jobs. We need a plan for the future if the American dream is to survive for future generations."

The imprints of the once vast ancient Roman Empire have made their presence known in discoveries this week across EŌĆtwitter.com/i/web/status/1ŌĆ”gU
cnni

10:00 pm ET January 16, 2022 RETWEET
Billionaires added $5 trillion to their fortunes during the pandemic, according to Oxfam, exacerbating economic ineŌĆtwitter.com/i/web/status/1ŌĆ”3X
cnni