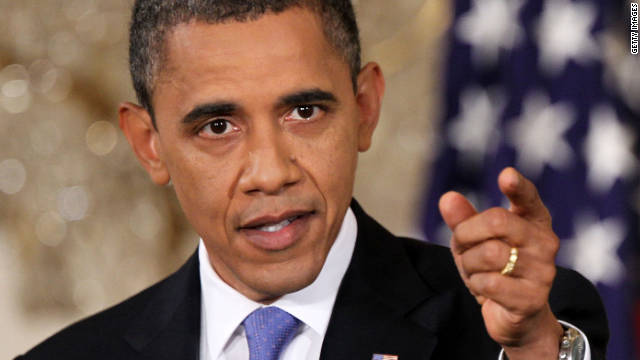 A jobs bill Obama has touted in a series of campaign-style speeches across the country is likely facing defeat in the Senate.
October 11th, 2011
04:44 PM ET

Overheard on CNN.com: More of the ‘no jobs’ blame game

"’Senate likely to be defeated in next election.’ Story at 6 o'clock. Want change? Vote out the scumbags and vote in people that will represent YOUR interests.” - IdahoJ

“And liberal morons everywhere will still blame the GOP for this.” - CitizenXXX

Defeat on the horizon for Obama’s Job’s bill?

The Senate will likely reject President Obama's $447 billion jobs bill Tuesday — legislation that includes a $265 billion extension of the payroll tax cut and a 5.6 percent surtax on people earning more than $1 million.

About the failure to pass the bill, CNN.com readers posted comments largely pointing fingers at a number of sources: Congress, the Republicans and Democrats and the President.

Coloradan said, “The GOP will keep trying to run out the clock and do nothing until the next election. That's a long time for the American people to wait for help. Too bad the money isn't going to Halliburton for phony construction that never gets completed in Iraq. Then it would be fast tracked by our Republican congressmen and women. Rebuild our own country though? Naaah. That might help Obama.”

sunsudo said, “Yes, yes. Blame the GOP even though Odummer and the Democrats had a supermajority for his first two years and NEVER had a passed budget. But please blame the GOP. I need a good laugh this a.m.

USATheFree responded, “sunsudo: I keep hearing people use that excuse ‘the Democrats had supermajority, why didn't they pass this and why didn't they pass that then.’ Two things: First, Republicans broke the filibuster record right out of the park during that time so it was amazing that anything got done at all. Second, why should it take one party's supermajority to do anything in this country? Shouldn't doing the right thing be the only thing that matters?”

EastCoastCat said, “There is no 'divide over economic growth.’ The Democrats really want to get the economy moving and people back to work (because it looks good to voters), and the Republicans really want to keep the economy down and people out of work (it makes Dems look bad to voters). And the Republicans are willing to burn America to the ground in an attempt to make Obama a one term President. They even stated that as their number one goal.”

starsrainlov said, “This is why there are people taking to the streets. They can't get a job out of school, they lose the job they've had for years, they don't get raises for years on end and your Republican reps. are completely out of touch. If it doesn't get fixed, those people in the streets are going to stop cleaning up after themselves and chanting peaceful protests. If it doesn't get fixed, this is going to turn ugly. People are fed up and WANT TO GO BACK TO WORK.”

manderson111 responded, “We extended the unemployment benefits and we passed the first stimulus...Where are the jobs Dems?”

noladude said, “As soon as Obama supports something, the Republicans immediately start to reconsider their support for it. Seriously, it's like a really bad joke.”

Miisa said, “Obama complains that the GOP won't let him do what he wants to do. But remember, if he hadn't rammed the healthcare bill down our throats, then we wouldn't have voted the Dems out of the house and he wouldn't be having this problem. So instead of asking: ‘Why are the Republicans blocking me?’ He SHOULD be asking things like: ‘Would things be easier if I still had a super majority? And ‘was it such a good idea to upset America by being shady about the health care bill?’"

InvsblHnd said, “Obama can't even get his own party to support his ‘jobs’ bill. Talk about failed leadership!”

JackChat responded, “There aren't 60 Democratic senators. Because the Republicans filibuster EVERYTHING, they need 60 votes for the bill.”

Some CNN.com readers cheered the backing, but others said it either didn’t matter or that Romney isn’t the right man for the job.

Wire Palladin, S. F. said, “That should pretty much wrap up the Republican primary. I wonder if Mittens told Christie he would be number two?”

Mike said, “Darn...I was hoping he'd support Cain...for some reason I like Cain more than Romney.”

The Real Tom Paine said, “Maybe someone wants to be AG?”

Cyrus said, “Who cares! The GOP platform is obsolete and obstructionist. Not going to vote for GOP even if Jesus was on that ticket.”

Billy said, “That should do it; a real game changer. Go Mitt!”

Dave from GA said, “A good choice. Don't like the rest of other candidates except Huntsman.”

Dinak said, “Now I am glad he's [Christie] not running, because I realize what an idiot he is if can choose Romney over Cain. Romney is a flip-flopping hypocrite and a liar. Cain at least is honest.”

al in calif said, “Romney is going to win hands down in '12 .... it's the lefty policies of Barney Frank and liberals who wanted to give everyone a mortgage that has us in this mess, despite the nonsense of trying to blame GWB. Oh, well. I guess you guys have to wait till '16.”

Dave said, “Everything Mitt has worked with was successful. I see no reason why it couldn't happen with the country, which is desperate for some good change by the way.”