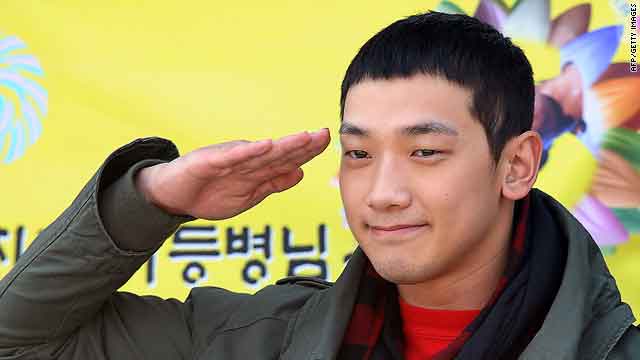 “Thank you for coming. I’m sorry to make such a fuss while leaving. I’ll be back from my duties soon,” Rain told about 1,000 fans near a military base in Uijeongbu, Gyeonggi Province, the Korean Times reported.

The celebrity thanked screaming fans, managed a grin and gave them a solemn military salute before retreating into the camp. The farewell lasted five minutes, the Korean Times reported.

Rain, 29, will serve in the military for about 22 months. By law, all South Korean males must serve their country for two years by the end of the year they turn 30. Rain, who has been an international music star for about a decade, has chosen to cut it close.

Major League Baseball's Shin-Soo Choo faced a similar situation last year, narrowly avoiding compulsory military service by cashing in on a gold medal exemption offered by the government when his South Korean national team won it all at the Asia Games.

On Tuesday, hundreds of foreign journalists and fans came from as far away as Japan and Hong Kong to see Rain begin his compulsory service.

Rain, a major part of the rise in Korean pop internationally, was named one of Time Magazine's Most Influential People in the World.

He begin his movie career in 2006 with the popular Korean film “I’m a Cyborg, But That’s OK.” Hollywood came calling shortly after when he was cast in 2008’s “Speed Racer.” He then went on to star in “Ninja Assassin.”