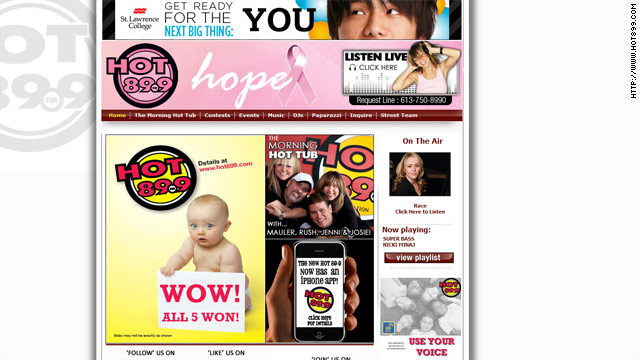 A radio station promotion that awarded five couples in vitro fertility treatments Tuesday as part of a “Win a Baby” contest has drawn the ire of Canadians on both sides of the issue.

Hundreds entered the contest held by Ottawa station Hot 89.9 for a chance to win a round of IVF treatments. After several weeks of having hopefuls campaign and write essays on why they should be chosen, the station whittled the competition down to five couples.

Hot 89.9 assembled the families in a room Tuesday, as posted on the station's website, and announced the award after a tense setup. “You’re all getting up to three fertility treatments. Congratulations!” radio host Jeff Mauler said as loud sobs from the women can be heard in the background.

The contest has touched a political vein in Ontario, where residents - unlike their neighbors in Quebec   - don't get government-funded IVF coverage. In July 2010, Quebec became the first jurisdiction in North America to fund IVF. Last month a Canadian survey showed that 75% of Ontario residents supported health insurance coverage for in-vitro fertilization treatments.

Despite the political sentiment, some say the contest crossed a line, playing on the emotions of women who want to have children.

“The station is clearly, clearly capitalizing on vulnerable patients that are desperate to have a family,” Beverly Hanck, executive director of the Infertility Awareness Association of Canada, told the Toronto Star newspaper.

She said the contest also should not be construed as actually giving the couples a baby, labeling it "false advertising, as IVF treatments can fail," the Star reported.

Toronto fertility counselor Jan Silverman called the contest "commodification of babies, turning babies into products," according to the Guardian newspaper.

The radio station has defended the contest. “Our goal was to help out those people who don’t have the money that really wanted a child desperately,” Mauler told the Star.

From video that the station posted on its website, Tracy Broad, who won the IVF treatment with her husband Nathan, is heard thanking the public and the radio station for the chance to be a parent.

“Words cannot describe how happy I am right now and how grateful I am for all the support and the love that we received. And it’s my 30th birthday today," she said to cheers from the other families.