A Texas jury has decided to penalize Alex Jones with $45.2 million in punitive damages in a lawsuit filed by the paŌĆtwitter.com/i/web/status/1ŌĆ”u8

Kevin Spacey will have to pay almost $31 million to Media Rights Capital, the production company behind "House of CŌĆtwitter.com/i/web/status/1ŌĆ”HQ 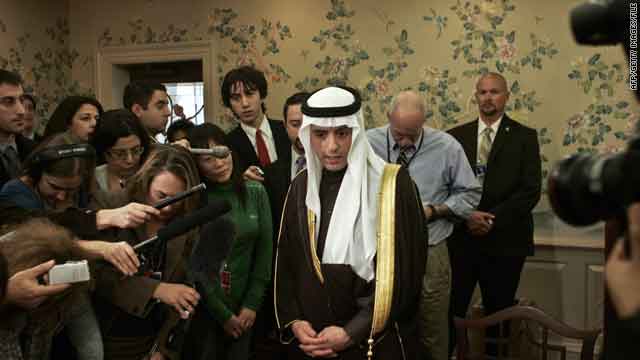 U.S. officials are determining how to handle relations with Iran after a plot to assassinate Saudi Arabia's ambassador to the United States was foiled.
October 12th, 2011
12:20 PM ET

Overheard on CNN.com: Terror plot a Saudi issue, not a call to war

"When we kill foreign citizens on foreign soil, it is patriotic. When they do it, it is an act of war." - AlpaChino

After details were released about a plot to assassinate Saudi Arabia's ambassador to the United States, Washington is grappling with how to handle relations with Iran. More sanctions appear likely and Rep. Peter King is calling IranŌĆÖs alleged involvement an act of war.

CNN.com readers reacted to news of the disrupted plot with much speculation and, regardless of just how involved the Iranian government was, they say action should be taken by Saudi Arabia, not the United States.

hoppinMad1 said, ŌĆ£More false-flag nonsense. Did they ever find WMD's in Iraq? Let's make up some crap about Iran to avert attention away from HolderŌĆÖs Fast and Furious scandal. The sheeple will eat it up. Baaa.ŌĆØ

goodyweaver responded, ŌĆ£So, so happy your comment is at the top - suggests that maybe, just maybe, Americans are sick to death of this crap. Even if it's not a false flag, this is certainly not worth going to war over. I don't personally care about a conflict between Iran and Saudi Arabia. They're both oppressive nightmares. Let them have each other.ŌĆØ

BinaryTruth said, ŌĆ£Did any of you actually read the article? It is Republican Peter King who is making the case for military escalation - not Eric Holder. If this were a false flag to draw attention from Barack Obama's AG the Republicans, especially King, would be first in line to tell you that.ŌĆØ

Tobias79 said, ŌĆ£It's sad that I trust Iran more than the US government.ŌĆØ

chanceflight responded, ŌĆ£It is sad, but it's true. Iran makes sense. It seems like since the Occupy Wall Street protests are getting bigger and expanding across the country, it's a good time to make a distraction.ŌĆØ

EdR1 said, ŌĆ£Why does the US have to do a damn thing? It was a Saudi Ambassador who was threatened. Saudis should say thank you to the US for helping stop it and then do whatever the hell they want to do. Why do the leaders of the US feel like they have to get into every dispute that comes along? To spend more of MY tax money maybe on the war machine? No thank you.ŌĆØ

jgooding said, ŌĆ£They tried to attack the Saudi Ambassador TO the United States. They didn't try to attack a US Ambassador to Saudi Arabia! The fact that it happened on US soil is our security problem. Let the Saudis go after them and stop spending our tax dollars defending THE REST of the world!ŌĆØ

James said, ŌĆ£I don't think anyone wants Saudia Arabia and Iran to go to war. The impact on oil prices across the world would be insane. If Iran indeed was involved then they will need to pay a price, but we need to be aware of the impact that military action will have on us and the rest of the world. Is the world economy really ready to absorb a full scale war in the Persian Gulf?ŌĆØ

Chrispy69 said, ŌĆ£Because, if true, the plot involved killing of American citizens and possibly congressmen on US soil. We have had plenty of reasons to attack Iran for over 30 years. Reagan should have went in there 30 years ago instead of trading arms for hostages...ŌĆØ

rocky4144 said, ŌĆ£This thing doesn't make any sense. Why would Iranians want to kill a Saudi guy in DC where the chance of success is one in a million and the price they would pay would be tremendous? Are we being set up to get into another war?ŌĆØ

eekthecat13 said, ŌĆ£Sending someone (or something) into a foreign country to assassinate someone you don't like.. uhhm.. isn't that what we've done to a dozen countries in this last decade alone?

jrm03063 said, ŌĆ£I hate to agree with Peter King about anything, but, in the strictest sense, he is absolutely right that this is an act of war and that the US has a proper interest in the matter. That said, so do the Saudi Arabians and I have few doubts that we engage in similar stuff against Iran (just much more skillfully). A measured response is needed.ŌĆØ

gravispad said, ŌĆ£Wow, an act of war? Here we go again. Sanctions people! Communicate with others to show Iran that they are alone in the world and can't continue with its nonsense. But an act of war? Talk about knee jerking, listen to the people. Did we really elect these extremists?ŌĆØ

US travelers may be rejoicing that a night out in Rome that once cost $100 now costs about $80, but it's a more comŌĆtwitter.com/i/web/status/1ŌĆ”M6
cnni

1:30 pm ET August 7, 2022 RETWEET
A bipartisan pair of senators has called on the Biden administration to designate Russia as a state sponsor of terrŌĆtwitter.com/i/web/status/1ŌĆ”R3
cnni

10:30 am ET August 7, 2022 RETWEET
Archie Battersbee, a 12-year-old British boy, at the center of a long legal battle between his parents and doctorsŌĆtwitter.com/i/web/status/1ŌĆ”5b
cnni

US travelers may be rejoicing that a night out in Rome that once cost $100 now costs about $80, but it's a more comŌĆtwitter.com/i/web/status/1ŌĆ”M6
cnni

1:30 pm ET August 7, 2022 RETWEET
A bipartisan pair of senators has called on the Biden administration to designate Russia as a state sponsor of terrŌĆtwitter.com/i/web/status/1ŌĆ”R3
cnni

12:30 pm ET August 7, 2022 RETWEET
GOP to diabetics: Cap on price of insulin if youŌĆÖre on Medicare, if not, no lid on prices. WPost:ŌĆØRepublicans letwitter.com/i/web/status/1ŌĆ”DD3bKt
susancandiotti

11:05 am ET August 7, 2022 RETWEET
Netflix's struggles are a sign that it's becoming a more traditional media company. cnn.it/3vIEpSA
cnni

10:40 pm ET August 5, 2022 RETWEET
Actress Anne Heche is in critical condition after crashing her car into a house in Los Angeles and suffering severeŌĆtwitter.com/i/web/status/1ŌĆ”Bq
cnnbrk