The University of North Carolina has suspended the football program's voluntary workout program after 37 players anâ€twitter.com/i/web/status/1â€¦Sm

The Democratic mayor of Houston stops the Texas Republican Party from holding its state convention in-person next wâ€twitter.com/i/web/status/1â€¦B1

Christian Cooper, the Black man who filmed a White woman calling the police on him while he was birdwatching in Cenâ€twitter.com/i/web/status/1â€¦VK

New satellite images of North Korea show activity at a facility researchers suspect is being used to build nuclearâ€twitter.com/i/web/status/1â€¦bx 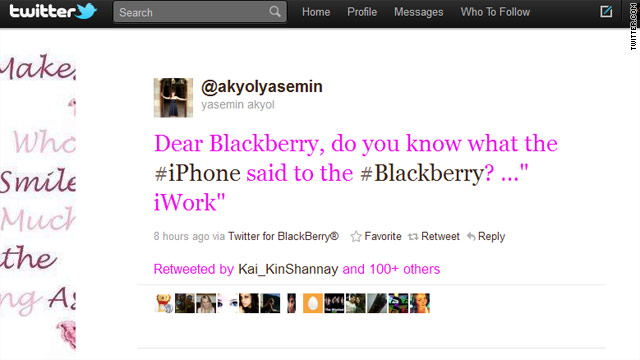 The president of BlackBerry's parent company apologized Thursday for the device's worldwide service outage, and said service levels are improving in many areas.

"I apologize for the service outages this week," said Mike Lazaridis, who is also the founder and co-CEO of Research in Motion, in a videotaped message on the company's website . "We've let many of you down. But let me assure you that we're working around the clock to fix this."

But that hasn't satisfied many irritated users.

And naturally, when you take away the ability for tapped in people to communicate, they will find a way to communicate their anger about it - loudly. So many BlackBerry users have taken to one of the technological democratic forums, Twitter, to share their grievances.

Here's a quick glance at what some BlackBerry users have been saying:

A lot of the chatter has focused on users threatening to ditch their BlackBerry phones for other competitors.

Some joked that their long relationship with the company, was turning into such a bad experience it was like having a fight with their significant other that appeared to be leaning towards a break-up.

Some focused on how their device was completely unusable without data capabilities.

And there's also been one really popular joke that continues being passed around:

One of the hot topics aside from general bickering appears to be Apple fans throwing the outage in the face of Research in Motion. Some people are suggesting the timing could be particularly bad for Research in Motion, which has held a big advantage over the iPhone because of their BBM messaging service.Â  With the new Apple operating system set to release today, iPhone subscribers will get iMessage, Apple's answer to BBM.

Others said they didn't plan on paying their bill because of the lengthy service outages.

Some users, who have experienced these kind of outages before, lamented about when the problem might be fixed.

And many people who rely on BlackBerry phones as their work phone struggled to be able to access e-mails or get their work done. Even a news reporter for @NBCLA who appears to be covering the Conrad Murray trial expressed frustration with the service.

And perhaps in the ultimate clue of frustration, many users were sharing the link http://isblackberrystillbroken.com/. Many commented that the fact that the website existed was reason enough to ditch the phone.

In case you were curious, the site looks like this as of 10:00 a.m ET on Thursday:

And then finally, after service was restored, the site gave the green light to users:

6:49 pm ET July 7, 2020 RETWEET
Siberia is one of the coldest areas on Earth, but is currently grappling with intense fires as well as record highâ€twitter.com/i/web/status/1â€¦IJ
CNNweather

9:22 am ET July 7, 2020 RETWEET
Japan has been devastated by heavy rain and landslides that have killed dozens and left many without homes. CNN Metâ€twitter.com/i/web/status/1â€¦VF
CNNweather

7:29 am ET July 7, 2020 RETWEET
Lightning can be such a scary thing. Watch this Russian footballer struck on the pitch while training. cnn.it/3e5SsGb
CNNweather