A Colorado state probe launched in response to the death of Elijah McClain found Aurora police had a pattern of praãtwitter.com/i/web/status/1ãÎVi

President Biden plans to announce the US and UK are helping Australia acquire nuclear submarines in a new pushbackãtwitter.com/i/web/status/1ãÎhT

Olympians McKayla Maroney and Simone Biles rip the FBI and Justice Department in Senate hearing on the botched inveãtwitter.com/i/web/status/1ãÎI9

Authorities have charged a man in the shooting of South Carolina lawyer Alex Murdaugh in what they allege was a conãtwitter.com/i/web/status/1ãÎwL 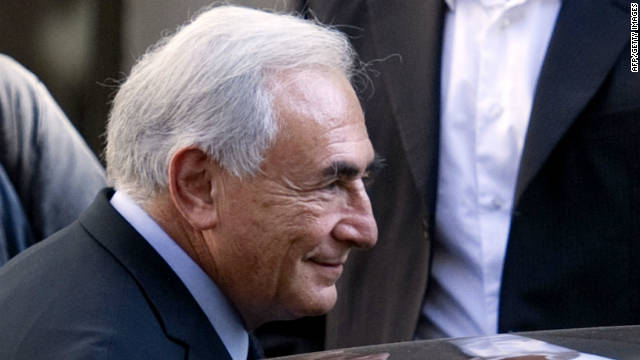 (Correction: An initial version of this post incorrectly reported that charges in this case were dropped, when in fact they were never filed.)

[Updated at 11:15 a.m. ET] After investigating a complaint filed against former IMF head Dominique Strauss-Kahn, in which a journalist accused him of attempting to rape her in 2003, French prosecutors said there was a lack of sufficient evidence to file charges.

Strauss-Kahn admitted to "sexual aggression" against Tristane Banon at the time, but a three-year statue of limitations applies in the case, the Paris prosecutor's office said in a statement.

Strauss-Kahn, who recently returned to France after sexual assault charges against him in New York were dropped by prosecutors, was questioned by Paris police last month, along with Banon.

Banon filed a complaint against Strauss-Kahn in France, alleging he attempted to sexually assault her in 2003; he has filed a counter-suit alleging slander.

Banon's mother, Socialist politician Anne Mansouret, has said she discouraged Banon from filing charges against Strauss-Kahn at the time of the alleged assault for fear it would hurt her journalism career.

In an interview with French TV station TF1 earlier this month, Strauss-Kahn said he met with Banon recently and "I said the truth to her in this meeting. There was no act of aggression, there was no violence. ... The version that was presented was imaginary."

On Monday, lawyers for Strauss-Kahn asked a judge in New York to dismiss a civil suit filed there by his accuser in a now-dismissed sexual assault case.

11:00 am ET September 16, 2021 RETWEET
Here are 5 countries that are opening up and adopting a "living with Covid" model: ãÂ Denmark ãÂ Singapore ãÂ Thtwitter.com/i/web/status/1ãÎJgyvZqhA
cnni

10:41 am ET September 16, 2021 RETWEET
A Jakarta court on Thursday ruled the Indonesian government had failed to uphold citizens' right to clean air, in aãtwitter.com/i/web/status/1ãÎ7k
CNNweather

10:34 am ET September 16, 2021 RETWEET
Around 3,000 healthcare workers have been suspended in France after failing to meet a government requirement to getãtwitter.com/i/web/status/1ãÎeg
cnni

10:30 am ET September 16, 2021 RETWEET
A fugitive who spent nearly 30 years on the run after allegedly using a hacksaw blade and bolt cutters to escape frãtwitter.com/i/web/status/1ãÎtr
cnni