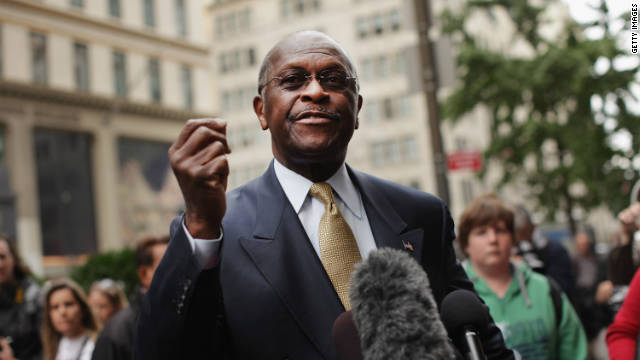 Overheard on CNN.com: Cain talks the talk they like to hear

"For many conservatives like myself, one's ethnicity is not an issue. It's what the candidate believes that counts."–Adam B. Embry

"So long, Herman! From viable candidate to race-baiter to footnote in a few short weeks."–MrsNeutron

Is Herman Cain a straight-talking businessman whom Republicans can love or a race baiter? CNN political reporter Shannon Travis writes that he "is the first African-American to have a real shot at becoming the Republican presidential nominee. So why isn't his ethnicity as much a part of his story as it was with Obama?"

CNN.com readers argued over whether race was really a non-issue with Republicans, or - as columnist LZ Granderson suggests - Cain is simply able to say what some are thinking.

TRENDING: Cain's race not as big an issue with conservatives as Obama's was three years ago

Gotta Be Kiddin said, "Actually, Colin Powell was the first African American who had a real shot at the Republican nomination. I'm not quite sure what Herman Cain is."

JLH said, "Travis's entire article is offensive, as it operates on the premise that conservatives are racist. I tried to find some means of statistics to support this supposition contained within the article, but none found."

johnbeer said, "Obama's race was never an issue with Republicans. Remember, Republicans voted in higher percentages for the Civil Rights Act of 1964 and the Voting Rights Act of 1965 than did the Democrats. Lincoln freed the slaves. What Republicans object to is that Obama is trying to destroy America with his socialistic policies."

GaryB said, "I don't care what race Cain may be. What I don't like is that his 9-9-9 plan would by most estimations would put even more of our country's money into the hands of a wealthy few while raising net taxes on a whole lot of working Americans and make the deficit worse. Hard to see how this helps our country, unless, of course, you're already part of the upper class."

Lost in Texas FOREVER said, "I live in the REDDEST state in the union, plenty of far-right conservatives down here. If you talk the talk they like to hear they couldn't care less what color you are."

Andy Botwin said, "Cain's philosophy that poverty is a result of laziness fits right in with decades of Republican ideology. Of course they embrace him. He's part of the 'all fates are deserved' mantra."

40acres said, "He is the only candidate I hear lumping all blacks (at least the blue ones) into a single category and labeling them as brainwashed and racist. I believe he did the same thing with Muslims. It almost seems he's being a little racist or very exclusionary, or both. Maybe that's what the Republicans like about him.

jhunt007 said, "Mr. Cain is a politician and LZ's suggestion that he is picking on poor black folks is wrong. He is calling out the corrupt culture of victimization that is passed from one generation to the next."

YummyYemmy said, "I am a black man who refuses to play that victim game. I have experienced racism in both my professional and personal life. Instead of complaining I just move on. I refuse to accept that any single individual or group can prevent me from reaching my destination in life. Anyone that says that 'as a black person there is nothing in our society preventing you from achieving success' is at the least delusional."

rdarkchild said, "I'm a black male without party affiliation. Many black people know men like Herman Cain who believe that all the stereotypes about people of color that dominate the conservative mindset are not whispered about them when they are not present. Herman, you are an accomplished man. How can you be so easily fooled?"

"Go and get that mouse!" CNN's @bianca_nobilo met a feline friend while interviewing Speaker of the UK House of Coâ€twitter.com/i/web/status/1â€¦x9
cnni

12:00 pm ET September 17, 2021 RETWEET
The government of Philippines President Rodrigo Duterte said it will not cooperate with an International Criminal Câ€twitter.com/i/web/status/1â€¦PS
cnni