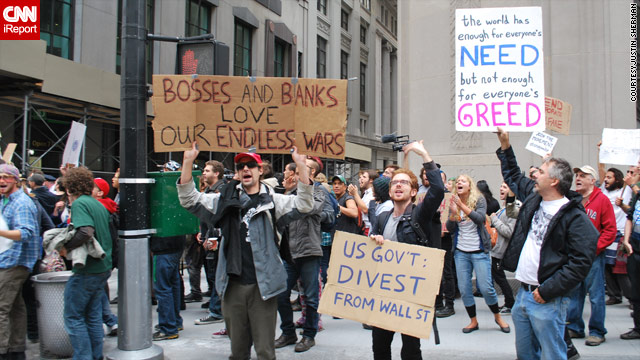 Overheard on CNN.com: Get money out of politics

"The root of the problem is mega-corporations buying members of Congress to rig capitalism in their favor." - blue175

What will victory look like for Occupy Wall Street?

The Occupy Wall Street movement is still quite young, but writes political commentator Sally Kohn, "my sense is that the ultimate demand could be a radical reform to get money out of politics," including public financing of elections and a constitutional amendment removing the status of corporations as "people." Many CNN.com readers agreed that money was polluting the process.

NocommentCNN asked, "Why are my elected representatives representing corporate interest before the interests of individual freedom and liberty that this country was founded for?"

MrSteiny said, "I consider myself a pretty far-right-leaning individual. I believe in the protection of property rights and that includes one's money. But one thing I think that most Americans (Democrat or Republican) can agree on is that money in politics is a poor idea. I'm not talking about paychecks. I think the men and women chosen to set and monitor the laws and policies of this country should be compensated fairly. I'm talking about lobbying, which really is more like bribing."

mlmilewicz said, "Liberal or conservative, most of the money behind political campaigns come from the corporate sector. I'm hoping this movement will encourage targeted support for political candidates who 'Just Say No' to corporate campaign support."

DApppp said, "Probably 90% or more of our elected representatives are part of that 1%. The change these people want is controlled more by Washington, D.C., than the banks and corporate America."

CactusThorn said, "If one of their goals is indeed to get money out of politics, it's one I support 100%. Accomplishing that should get Congress and the president out of the posturing mode and into a meaningful legislative mode that includes bipartisionship and compromise."

jsnholloway said, "We have a political system that favors those with money. The system is rigged. The super-rich and the multinational corporations have a louder voice in our democracy because they are the ones who finance the billion dollar campaigns. They are the ones whom the politicians placate. This is wrong. It results in monetary policy that puts even more money in the pockets of these folks. I don't blame rich people; I blame the system they are freely allowed to exploit. 'Victory' will come in stages. Stage 1: Raise awareness."

Creating a 3D image of a real person in a video game or movie is usually time-consuming and expensive. But an Irishâ€twitter.com/i/web/status/1â€¦1N
cnni