Israel releases list of Palestinian prisoners to be swapped

Israel early Sunday released the names of the first group of Palestinian prisoners to be freed in exchange for captured Israeli soldier Gilad Shalit, setting in motion a process that will allow the public to file objections to specific releases.

The list features 477 names, including those of Ahlam Tamimi, serving life terms for a suicide bombing at a Jerusalem restaurant, and Amneh Muna, who plotted the killing of a 16-year-old Israeli boy in 2001 and received a life sentence.

Twenty-seven of the prisoners are women. The second stage, which includes 550 prisoners, will occur later this year.

Twenty inmates were killed and 12 injured during a fight Saturday at a prison in northeastern Mexico, officials said.

The fight at the prison in Matamoros, in the northern border state of Tamaulipas, started early in the morning, according to a statement from state's public security secretariat.

With the help of police, prison officials restored order, it read.

Efforts were being made to contact the inmates' families.

U.S. combat brigade to leave Iraq well ahead of schedule

A brigade of U.S. troops originally scheduled to be among the very last to leave Iraq is being pulled out of the country months ahead of its planned departure, military officials said Saturday.

The announcement follows news this month that a deal to keep American troops in Iraq past a December 31, 2011, deadline to withdraw was on shaky ground after Iraqi leadership said any remaining U.S. forces would not be granted immunity from Iraqi prosecution. Secretary of Defense Leon Panetta and other top brass have repeatedly said any deal to keep U.S. troops in Iraq beyond the withdrawal deadline must require a guarantee of legal protection for American soldiers.

The Fourth Brigade Combat Team, First Armored Division, based at Fort Bliss, deployed to Iraq in August to replace two withdrawing brigades. The troops were sent with the understanding they would be among the last to leave the country and were told to expect up to a 12-month deployment, though it wasn't clear how long they would stay in Iraq. But brigade officials informed hundreds of military families gathered Saturday at its headquarters that their troops would begin returning home within weeks.

When family members inquired why soldiers were returning early, they were told by a military official: "Basically, what's happened ... is that the United States and Iraq have not come to an agreement," according to a CNN reporter who attended the meeting.

News Corp.ŌĆÖs Rupert Murdoch was repeatedly interrupted by hecklers while delivering the keynote address at the National Summit on Education in San Francisco on Friday, CNN affiliate KGO reported.

"Resist corporate domination of public education!" one heckler said, according to KGO.

Video of the event shows others in attendance cheering as the protesters were removed.

KGO reported that the activists are a part of US Uncut, a group against cuts to public services. The group claims Murdoch is trying to make money from public education.

The interruptions came shortly after Murdoch said, ŌĆ£"We need to tear down an education system designed for the 19th century and replace it with one suited for the 21st," KGO reported.

Murdoch has been an object of scorn since revelations surfaced in July that journalists working for the News of the World had hacked into the cell phone of a missing girl, deleting some of her messages to make room for more. The deletion of messages gave 13-year-old Milly Dowler's family hope that she was still alive when she was already dead. 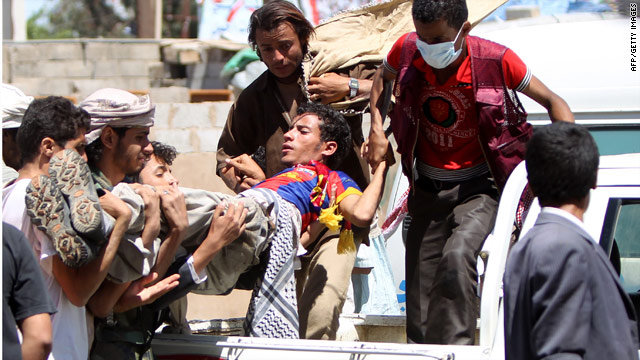 Mohammed Al-Qubati, who was at the scene of the protests in Sanaa's Change Square, said forces opened fire to disperse demonstrators who planned to march to the city center from the square.

Demonstrators have taken to the streets regularly to call for an end to the rule of President Ali Abdullah Saleh.

On Wednesday, tens of thousands of protesters gathered in Sanaa, marching, chanting and calling for the United Nations to come out with a firm resolution in support for change in the country.

For its part, the government says it is trying to come up with a solution to end the political stalemate.

he son of U.S.-born militant cleric Anwar Al-Awlaki was among those killed in a trio of drone attacks in southern Yemen on Friday night, a security official said.

The attacks, carried out in the Shabwa district, killed seven suspected militants, the defense ministry said. It would not confirm that Abdul Rahman Anwar Awlaki was among them.

The senior security official in Shabwa, who did not want to be named because he is not authorized to speak to the media, said the younger Awlaki had been hiding in the mountains of Shabwa for more than eight months. He had first-hand knowledge of the death, he said.

On September 30, a U.S. drone strike killed Anwar al-Awlaki, a U.S.-born miltant cleric who was a key leader of the terrorist group al Qaeda in the Arabian Peninsula (AQAP).

A cashier at a New York fast food restaurant has been charged with felony assault for beating two unruly customers with a metal object during an argument.

The incident occurred at a McDonald's on West 3rd Street about 12:30 a.m. Wednesday.

The two 24-year-old women entered the store, placed their order and then began arguing with the cashier, 31-year-old Rayon McIntosh, police said.

CNN affiliate WCBS said the altercation began when the cashier questioned a $50 bill the women gave him. They responded by hurling obscenities at him.

A cell phone video shows how the situation quickly escalated.

One of the women curses at the cashier, then reaches over and slaps his face.

The woman then climbs over the counter, sending the cashier running toward the kitchen area. The other woman walks around to join her friend.

The cashier then suddenly reappears with what police described as a metal object and repeatedly hits the women.

Occupy protests spread to cities around the world

The Occupy Wall Street movement spilled into main streets around the world Saturday as crowds chanted and marched in a global movement of discontent.

Protesters took to the streets in Europe, the United States and Asia following online organizers' calls for a worldwide rally.

In Japan, about 200 people marched through Tokyo carrying various signs, including "No More Nukes and "Free Tibet." The crowd included children jumping and skipping behind the adults.

Some protesters wore costumes - including a giant panda.

In the Australian cities of Melbourne and Sydney, crowds of mostly union workers gathered near a bank in a peaceful protest.

In South Korea, Arthur Fragoso was among a group gathered outside a bank in Seoul.

"We are protesting mostly for economic issues worldwide," he said. "We need to come up with ideas to solve the world problems."

When the attackers got close to the gate, he said, three fired weapons and rocket-propelled grenades to the tower of the base where guards were watching.

The fourth attacker, who was driving a Toyota, detonated his explosive device near the gate, allowing the others to get in, according to the official.

A Taliban spokesman claimed responsibility for the attack.