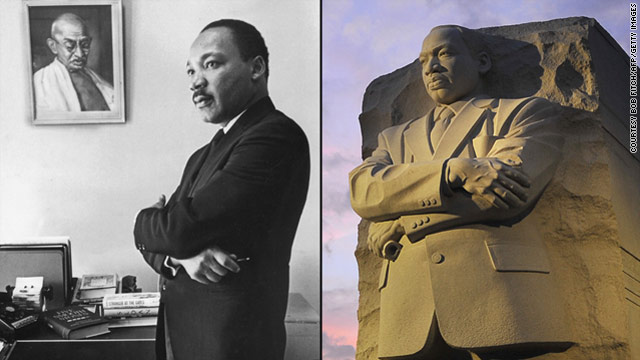 Photographer's image is basis for memorial

When Bob Fitch heard about plans for a Martin Luther King Jr. Memorial in Washington, he thought he might get a call.

Fitch worked for several years with the civil rights movement as a photographer and captured many iconic images of King.

When the call came some ten years ago, Clay Carson was on the other end. The founding director of the MLK Research and Education Institute at Stanford University was part of a group working on a design submission for the monument. As the editor as King's papers, Carson knew the exact image he wanted for the monument.

The photograph, shot by Fitch in 1966, shows King standing in his office with a pen in his right hand, arms crossed. Carson felt the image shows a reflective man, striking the right tone for the monument his team conceived to encourage dialogue.

Carson's group eventually beat out 900 other submissions as the winning design.

But today both Carson and Fitch raise concerns about perceived differences between the initial vision and the finished monument. Some are superficial. In the photograph, King holds a pen in his right hand. In the statue, he holds no pen, but does hold a scroll in his left hand. On a more fundamental level, both Fitch and Carson question whether King would have wanted such a large monument and likeness.

Carson believes the issue of the pen came about due to a flipped negative that put the pen in King's left hand. The scroll replaced the pen so as not to be historically inaccurate. Several calls to the MLK National Memorial Project Foundation about the scroll went unanswered.

As to what King might have wanted to represent his legacy, Fitch says just the achievement of the monument is one to celebrate. Fitch says many people who worked in the movement, himself included, feel joyful that the "miracle of equity that he helped move forward for Afro-American people is honored in some way by the nation."

And for Carson the prominent placement of the monument, the first major monument on the National Mall honoring an African-American, fits with the grand vision of King.

For Carson, this moment brings back memories of another time on the mall, the famous March on Washington in 1963, where King laid out his grand vision. Said Carson: "Many of us who were there thought it was about getting civil rights legislation passed. But he was carrying on a dialogue with Jefferson about the meaning of the Declaration of Independence."

Now, standing in stone, the grand monument to the man and the movement seeks to continue this conversation. As Carson says, "Hopefully Americans black and white and many other races will be part of that discussion that is raised visually by the memorial: What do our nation's ideals really mean, how close are we to reaching those ideals and making them something other than words."