Amazon workers at an Alabama warehouse have resoundingly rejected a push to form the company's first US-based unionŌĆtwitter.com/i/web/status/1ŌĆ”u0

Editor's note: iReporters all over the globe are showing us what Occupy Wall Street is like in their towns and cities through the Open Story: from the Aleutian Islands to Raleigh, North Carolina; from Reykjavik, Iceland, to Zadar, Croatia. Check out a map of the reports, videos and pictures here.

The Occupy Wall Street movement, which swept across the United States as thousands┬Ādemanded that government institutions change to help┬Āfix a struggling economy, gained a major boost as the world began to come together in solidarity over shared economic frustrations.

As the sun rose on each country, one-by-one in the same way each stock market would open, protesters took to the streets. What began as a movement that was largely ignored by the mainstream media can't be dismissed anymore, not when thousands of people are sharing rally cries from Zucotti Park in New York to City Hall Square in┬ĀCopenhagen, Denmark. Perhaps that's what organizers hoped for when they┬Ācalled the global day of protest "Solidarity Saturday."

But that global push may not end with the one day of solidarity. Some would say it has bolstered the ambitions and confidence of those who began Occupy Wall Street. It was a hint that, with the right support and organization, they can spread the message they've so desperately tried to get across: They want change, and they want it now. And even though the frustrations and complaints may differ from country to country, the theme remains that governments aren't handling economic crises properly.

The protests spread amid the growing financial troubles for several Western countries. Maybe that's why it's no surprise the global movement came during a G20 meeting of ministers and bankers in Paris. Finance ministers with the Group of 20 pledged Saturday to take "all necessary actions" to stabilize global markets and ensure that banks are capitalized.

Europeans turned out to protest┬Āamid debt troubles and austerity plans in Greece, Belgium, Italy, Spain, Ireland, Portugal and Germany. And in┬Āan increasingly intertwined global economy where Americans watch what happens in the Greek debt crisis, the world too is watching to see how the United States is handling its economic issues.

In the spirit of that solidarity, thousands stepped out to support the frustrations of the unemployed in the U.S. and, in some cases, to share their own grievances.

We're taking a look at scenes from across the world to find out more about the main frustrations being lodged and how the protests are drawing support from each other through the lenses of our reporters and iReporters around the world.

The movement gained traction in London especially because of the presence of WikiLeaks founder Julian Assange.┬ĀSome Brits,┬Āwho have not been shy to share their frustrations with their economic situation during riots months earlier, echoed American sentiments that governments need to focus not just on the rich but on the little man.

Amedeo d'Amore , an iReporter, was at a demonstration near St. Paul's Cathedral, where he said there were about 1,500 to 2,000 protesters along with a few hundred police officers. 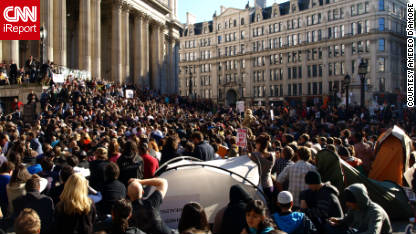 Protesters gather at the London Stock Exchange on Saturday.

"Essentially, they are very disappointed by the current economic system," he said. "From my understanding, they feel that governments have done too much to protect companies while doing very little to assist the average citizen."

iReporter Hao Li┬Āwas also at the London protests and said the activists were mostly young people between 20 to 30 years old. They didn't appear to represent the overall "general population" of London or the United Kingdom. It was more politically active young people rather than those who have suffered from the financial crisis, he said. 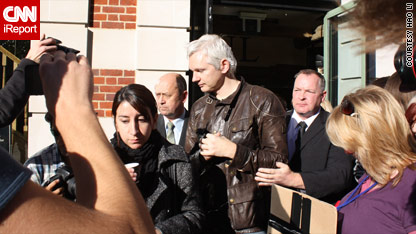 "He did say several times that the current financial system was unsustainable (and) made a few jabs at the greed and evilness of bankers in London who caused people so much harm," Li said.

Kyle Meyr's photos┬Ā showed signs portraying the banks in the UK as the real looters, referring to the summer riots. But Meyr found that like in New York, there was an apparent lack of cohesion as to what the protests centered around.

"The crowd was amazingly enthusiastic, but you could see that a good number of them were confused about what they had come out to protest. It seemed that a lot of them had mixed agendas and scattered ideas of where these protests should be going," Meyr said. "Some tried aggression and yelling, others handed out fliers, and the rest seemed to just be along for the ride.

"To be completely honest, I cannot decide on one unifying theme of the protest. Most were there to show their hatred for the government bailouts for banks, and others hated the banks themselves, but there were a few that just seemed to dislike wealthy people in general."

John Sprankle┬Āwas alongside demonstrators in Paris who were showing solidarity with Occupy Wall Street.

He said that while posters seemed to indicate the economy was at the heart of the protest, he wasn't sure whether there was a solidly common theme.

"I don't see anyone offering solutions. There doesn't seem to be a unified voice," he said.

He also felt some came out to be part of the movement without really being involved in the cause.

"I also believe the majority of the marchers don't even know what they are marching about and see it more as a party," he said. "In fact, I'd say if anyone can camp put anywhere for six weeks, they are definitely not producing and paying taxes, so they have nothing to protest against."

At the protests in Rome, things took a particularly violent turn. Firefighters battled a blaze at an Interior Ministry building near Porta San Giovanni, the main gathering site of the Italian protesters taking part in the Occupy movement Saturday.

Ernesto Gygax documented the protests near the famous Basilica of St. John Lateran, where police struggled to keep violence from turning deadly. A spokesman for Mayor Gianni Alemanno, who condemned the violence, said that 70 people were injured, 40 of them police officers.

Jeremy T. Katz captured the mood of the demonstrators.

"'The leaders were holding a sign that said, "PEOPLE OF EUROPE: RISE UP,' " he said.

Katz said the crowd was primarily peaceful and appeared to be normal working-class citizens. They chanted demands in Italian, he said. Generally, the group appeared upbeat "but clearly angry with the EU and Italian officials."

"Their main demands seemed to revolve around the failure of their government and the EU to handle the economic crisis. They protested job cuts and tax increases, as well as the "greedy" big banks and corporations. I could tell they were also upset that the Italian premier, Silvio Berlusconi, had not been voted out of office yesterday."

Katz too saw violence at the protests.

"Further back, there was a group of more violent protestors who lit two cars on fire and smashed the windows of a post office and a bank," he said.

Siri Klemetsaune went to observe the OccupyOslo movement in Norway and said that about 100 people turned out for the protest near Stortinget, the parliamentary building.

Klemetsaune, who said she is unemployed and on welfare, said the turnout was larger than expected. 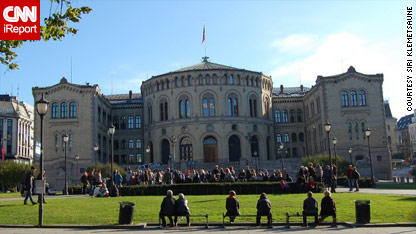 Demonstrators gather at OccupyOslo in Norway.

"Despite the initial grim sound of OccupyOslo in light of recent events, a fairly major crowd of approximately 100 people gathered outside the governmental building on October the 15th to show their support of the Occupy Wall street movement," Klemetsaune told CNN's iReport. "This in a country in which the entire population might as a matter of fact be a part of the infamous 1%."

Klemetsaune, 29, is "fairly OK" with the government's rule in Norway for now.

"But the future worries me. The system of ruling appears to need a change, before we fall into the trap America has fallen into,"┬ĀKlemetsaune said. "Now, IŌĆÖm not sure how to end this. But letŌĆÖs just say that even though we are filthy rich and privileged, we stand by the people of the worlds side. Occupying."

Mikkel Wiese was with demonstrators in Copenhagen.

He said there were young and old side-by-side with parents and children, those who were politically active and those who had lost their jobs. 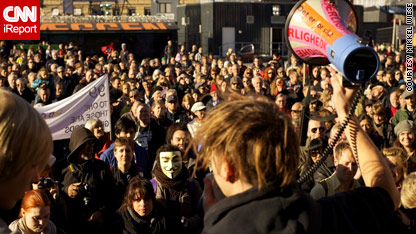 "They want money spent on the 99%, and they want to take it not only from the rich but also from the expenses on wars," he said. "I have sympathy with the peacefully minded protesters and their concern for the poor."

Wiese sent pictures of the large-scale demonstrations where messages were shouted through megaphones and signs proclaimed that change was in the hands of the protesters. 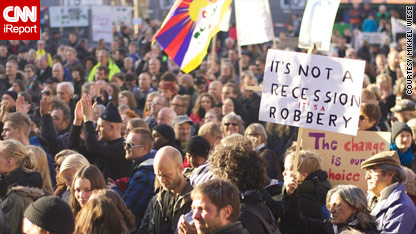 Signs show the frustration from those at protests in Denmark.

Sarah E. Matson was in Amsterdam, Netherlands, where protesters are "demanding an end to corruption in the financial world and more attention for the middle class," she said.

"I totally agree, which is why I was there," Matson told CNN's iReport.

Matson said everyday people took turns at the microphone, speaking both in Dutch and English. 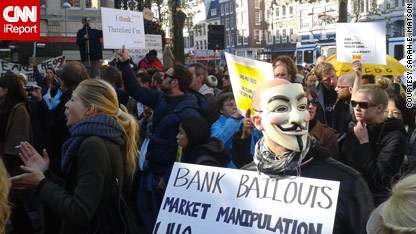 "The complaints were as varied as they were poignant," she said. "(There was) a refugee from the Philipines, a student from Amsterdam, older protesters remembering a similiar protests years earlier and young organizers making it clear that change needs to happen for the world to become a safe, cleaner and less corrupt place."

Halldor Sigurdsson was at a rally in solidarity with the global Occupy movement in Rekyjav├Łk, Iceland.

"The people were angry and said what the think about the financial system in Iceland and all over the world," he said. "They want the government to stop helping those that are responsible for the banking crisis while the public gets little help."

Jason Ward,┬Āa Los Angeles native visiting Tokyo on a three-week trip, was at a demonstration where he said roughly 300 demonstrators took part in the solidarity movement.

"The crowd was about 80% Japanese and 20% American tourists, with signs in both Japanese and English," he said. 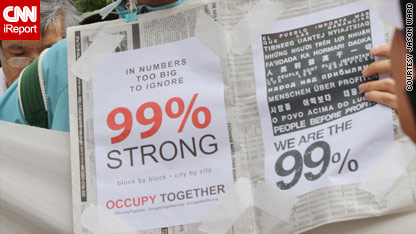 "Though there were chants about corporate greed, it was predominantly an anti-nuclear movement. The numbers weren't huge, but the folks I talked to seemed very inspired by what was happening in the U.S."

Keith Perron, a radio journalist living and working in East Asia, was with people protesting in Taipei, Taiwan.

"The police presence was not big. Very small, in fact," he said. "After the crowed walked around the Taipei 101, they were let in the Taipei 101 in an orderly fashion, which was very unexpected."

Perron said he believed that about 85% of the crowd was between the ages of 18 and 30.

Yusur Al Bahrani was with the Occupy Toronto movement that marched through the streets of the city's downtown area.

He described the protesters as being from different communities and having "different political perspectives, but they all share one thing: being against war, militarism and corporate greed."

2:45 pm ET April 10, 2021 RETWEET
Many members of the American military and their families stationed outside the US are growing increasingly frustratŌĆtwitter.com/i/web/status/1ŌĆ”yC
cnni

2:15 pm ET April 10, 2021 RETWEET
@jaketapper @TankSchottle Yes we do! Tank has the biggest heart. We have plenty to learn from you Tank.­¤Æ£
sarasidnerCNN