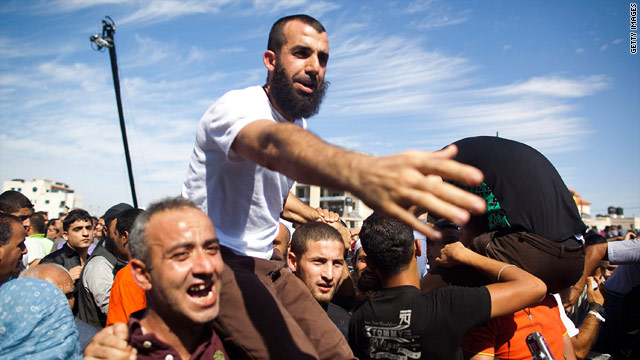 A Palestinian prisoner is held aloft by relatives after arriving in Mukata following his release Tuesday in Ramallah, West Bank.
October 18th, 2011
10:11 AM ET

Gilad Shalit story: Exchanging one for many not a first for Israel

Israel is freeing more than 1,000 Palestinian prisoners, including hundreds serving life sentences for attacks on Israelis, in exchange for Israeli soldier Gilad Shalit, who was captured by Hamas in 2006.┬Ā

The move has prompted many to ask if exchanging many people for one man is unusual. In the past, Israel has exchanged prisoners several times with its neighbors. Overall, Israel has released about 7,000 Arab prisoners over the last 30 years in exchange for 19 living Israelis and the bodies of eight prisoners. Here are some of those instances:

In 1985, three Israeli soldiers held in Lebanon were released, but only after Israel freed 1150 Lebanese and Palestinian prisoners.

In June 1998, Israel and the South Lebanese Army released 65 prisoners and the remains of 40 Hezbollah guerrillas for the return of the body of an Israeli soldier killed in combat.

In 2004, an Israeli businessman was released along with the remains of three soldiers. In return, Israel freed 436 Palestinian and Lebanese prisoners.

This weather reporter got caught in an on-air graphics error that "multiplied" her across the screenŌĆtwitter.com/i/web/status/1ŌĆ”M4
cnni

5:01 am ET May 16, 2021 RETWEET
Maldives has banned tourists from South Asia, cutting off an escape route for wealthy Indians fleeing their own couŌĆtwitter.com/i/web/status/1ŌĆ”os
cnni

2:00 am ET May 16, 2021 RETWEET
Australia received its first repatriation flight from India since its controversial ban on travel from the Covid-hiŌĆtwitter.com/i/web/status/1ŌĆ”ux
cnni