[Updated at 7:25 a.m. ET] The mission to bring home captive Israeli soldier Gilad Shalit has been accomplished, Prime Minister Benjamin Netanyahu announced Tuesday, saying Israel was united in joy at his release and in pain for the price that Israel had to pay for it. 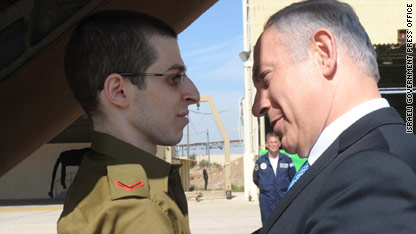 Israeli television showed him in the company of IDF soldiers minutes after the announcement, sparking joy in Israel.

He is in good health and is now en route to see his family and top Israeli leaders, the military announced.

Shalit learned about a week ago that he was going to be released, though he "felt it for the last month," he told Egyptian television after his release.

"I missed my family. I missed going out and meeting people," he said in the emotional interview, where he appeared pale, tired, tense, and sometimes out of breath, although he was seated in a chair.

Israel is releasing more than 1,000 prisoners in exchange for Shalit.

"I hope this deal will move the peace process forward," he told Shahira Amin of Egyptian TV, saying he would be glad if the remaining Palestinian prisoners are released "as long as they do not go back to fighting Israel."

The interview came shortly after Egyptian television showed a short clip of Shalit walking unaided with an escort of about half a dozen people. He looked thin and dazed, wearing a dark baseball cap and collared shirt.

Shalit came via Egypt because it acted as a mediator between Israel and Hamas, which do not have relations.

Shalit's father told Israeli television earlier it was the happiest day of his life.

Israel freed 477 Palestinian inmates from Israeli jails shortly before Shalit was released, the first group of a batch of more than 1,000 Palestinians being swapped for Shalit's freedom.

This weather reporter got caught in an on-air graphics error that "multiplied" her across the screenâ€twitter.com/i/web/status/1â€¦M4
cnni