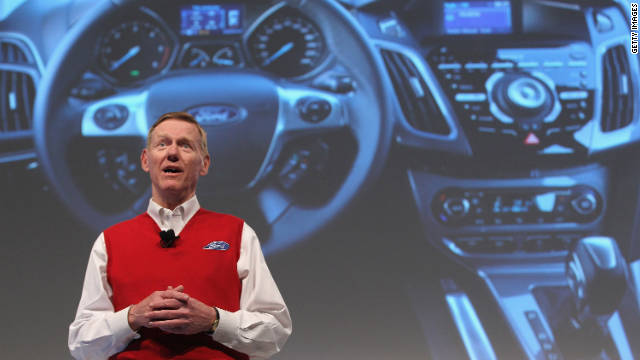 “What the world really needs is a device that shuts down cell phones while the car is moving.” - Bud128

Ford has been installing a feature in its new vehicles - and many of its older ones - that can read text messages out loud. The feature, intended to reduce texting while driving, is already installed on all model 2012 Ford vehicles.

Of the new technology, CNN.com readers saw the pros and cons—and some simply praised Ford for their innovation.

IanA1 said, “Ford seems to be getting better every year lately...keep up the good work, and good to see an American-owned company being truly competitive.”

Ethnya said, “Ford continues to innovate to meet consumer demands. Good to see that some companies still do this.”

SpaceMuslim said, “That's going to be hilarious when a ‘sext’ comes in and you are not alone in the car.” Bassdude responded, “Especially if your wife is sitting in the passenger seat.”

JackLumber said, “I could live without the car reading my text messages. If they could make a soundproof cubical in the back seat for my mother-in-law I might consider trading my Chevy in for one.”

dantx10 said, “Will the car remind the kids to ‘Ear muff!’ before it reads what is on the text messages?”

twotired said, “All I want is transportation, not a whiz-bang toy on wheels!” NL5 responded, “Ride the bus then.”

nichtgeek said, “Automation in this case will not help very much. People will still need to reply to text messages so the distraction element remains.” Whattheheck2 responded, “Actually I tried it in my 2010 Escape yesterday and I can respond to a text by voice. It converted voice-to-text via the in-car microphone all while my phone was sitting in my pocket.”

smartdem said, “Still dangerous.” The problem with texting or talking on the phone while driving isn't having your hands on the phone, it's that your attention is directed to the conversation instead of the road.”

Guest said, “My son knows NOTHING about how his car operates [and chooses not to learn] but sees his vehicle as a rolling entertainment system – and this view is not untypical of his age group.”

SC2Pilot said, “My 2012 Fusion has this and it's pretty neat, but no less distracting than texting. In general, trying to use the SYNC system is very distracting, at least for me.”

TJ14 said, “Obviously they have done their market research: Most people are morons. Anyone who is driving a car needs to be driving the car and nothing else. If this feature is attractive to you, you need to hire a chauffeur and forget about driving altogether.”

Interested in discussing another story or connecting with other CNN.com readers?
Open thread: Talk about the news, or whatever's on your mind

In the first season of “The Real Housewives of Beverly Hills” viewers got an inside glimpse of Kelsey and Camille Grammer’s marriage ending. Now happily remarried, Kelsey Grammar sat down with Piers Morgan to discuss his new-found love—and politics—among other things.

Conversation highlights include: “Real Housewives of Beverly Hills” was a "parting gift" to Camille and "I'm afraid I was destined to be a Republican."

Hunter4Obama said, “The guy is a self-absorbed boob. He marries for looks and then acts surprised when his wives turnout to be gold diggers. This is the guy we should talk to about what is best for the country? I am surprised he is not one of the Republican candidates.”

JCocktosen said, “Why do we care what actors think? They are people who put on makeup for a living and pretend to be other people. Actually...that is pretty much the definition of a politician...”

yeasayer said, “Why is Morgan asking a television actor so many questions about his political opinions? That's not why he is famous, and is outside his realm.”

elcidmarine responded, “Actually, it has become what he's known for. And it's really not uncommon for celebrities late in their careers to take an active role in politics. Some of the more famous ones: Alec Baldwin, Matt Damon, Ronald Reagan, Arnold Schwarzenegger, Frank Sinatra and John Wayne.

myopin said, “The problem is that once you prove yourself to be a disrespectful person, no one wants to hear your views about anything. And Kelsey no matter what your wife did, you disrespected her in public, you gloat about your first date and your wife didn’t even know you were divorcing her. Sorry. When you just disregard your responsibilities to your own family that proves your character.”

richeyrich said, “Uh Kelsey, you are on wife number FOUR. Could it be that YOU are the problem in a marriage.”

laurapalmer4 said, “Their first date was on Christmas? If you had young kids (which he does), wouldn't you rather spend the holiday with them, rather than your latest punchboard? What a self centered jerk. But he is funny.”

PennyLady said, “Maybe he enjoys marriage but not in a 'forever' kind of way. Who are we to judge that?”

hynzerelli said, “She wanted ‘Frasier’ he gave her ‘Sideshow Bob.’ "