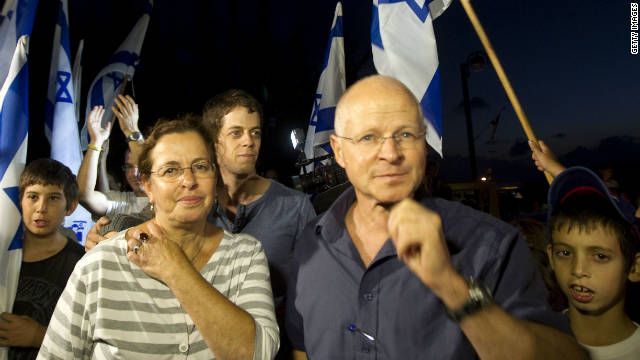 The parents of freed Israeli soldier Gilad Shalit camped out in front of the Israeli prime minister's office for more than a year.
October 18th, 2011
12:27 PM ET

Overheard on CNN.com: It’s a proud day for Israel

“This is a great day to be Israeli. We will never rest until we save even one life. We believe in life. We do not believe in murder and killing innocent people. That is the difference. May the Palestinians start believing in peace and life. May we have peace one day between Israelis and Palestinians." - jewishcowgirl

Israeli soldier Gilad Shalit, who was captured by Hamas in 2006, is home now after Israel agreed to release 1,000 Palestinian prisoners. The lopsided number has created some controversy, but there is wide support for the deal in Israel.

What did CNN.com readers think of the swap? Most praised Israel for saving a young man’s life; they said the move demonstrated how much Israel values all human life. Other readers condemned the Palestinian releases, saying they are all terrorists. Some defended the rights of Palestinians.

bigbadbernie said, “The point is not the 1:1000 ratio, it’s that in a professional military force it is good to know that no one is left behind and you can go into harms way with that knowledge and be more effective. That is the stuff that makes a great nation and separates them from their enemies.”

IsraeliStude said, “I do want to say that finding out Gilad could watch TV and knew about the support of his parents and the public shows Hamas had at least some compassion. There is hope after all!”

ModGOP called it “A prime example of how the Israeli government actually cares about their own people!”

AmitAtlanta said, “This deal makes no sense. All talk of how much Israel values a life falls on deaf ears knowing fully well Palestinians are ready to give up their lives/their children’s lives to kill even a Jewish owned mouse! The Israeli action only emboldens the hostile world community to charge that the much maligned Israelis have far more innocent Palestinians rotting in their prisons and emboldens the Palestinians to continue with their kidnappings of Israeli soldiers.”

ChefCHEESE said, “It’s a great day for Gilad and all the other prisoners who can go back home after years.”

Guest said, “It's not easy to set free 1,000 terrorists, but one Israeli boy is worth even 100,000 of them! The important point is that Israel will NEVER leave its soldiers behind. and this is why the people in Israel supports this deal.”

oferbz said, “The fact that Israel is swapping one soldier for more than a thousand terrorists, shows the world how much Israel values life itself, unlike the Hamas who sends its people to suicide bomb missions.” AntiZioNazi1 responded, “Caring after 5 years? Wow !”

Anatile said, “Welcome home Gilad. We love you. Only the people in Israel understand how much life is precious . You are definitely worth 1,000 people, even more. I'm very proud to be Israeli citizen today.”

DanJones said, “I wonder how long it will take for Hamas or Hezbollah to kidnap the next ‘Giliad Shalit’ and how many they will kill in the process?”

lho said, “Anytime you trade 1,000 of anything for 1 of the same thing.....whether you know anything about the items in question, there is absolutely NO doubt that the one thing is worth at least a thousand times more than the 1000 things. Sorry. No way around that.”

pupplesan said, “The question remains unanswered within the article. The real answer is twofold: first, Israel knows that many of the people it has imprisoned are innocent and second, obviously, there is an unspoken element of religious elitism involved here.”

silvery1261 said, “Let’s face it. This freed Israeli soldier is not a teenage schoolboy who was kidnapped in his home. He is an Israeli soldier trained to kill, fully armed and in army uniform. He knows the risks and he wasn't in this to distribute flowers to Palestinians or candy to the kids. Why is it so hard for Israeli supporters to admit this fact? Granted that one can take the view that his job was to protect Israeli civilian society, but so were the liberated Palestinians who fight the mightiest army in the Middle East to protect their civilians as well.”