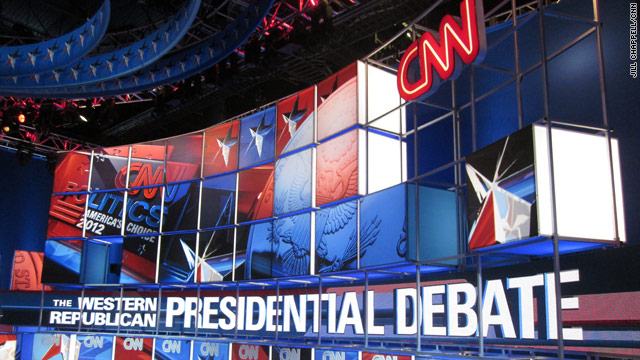 Romney, Cain and five other candidates will participate in the debate, moderated by CNN's Anderson Cooper, starting at 8 p.m. ET at the Sands Expo and Convention Center and the Venetian Hotel and Casino in Las Vegas, Nevada. The debate will be shown on CNN, the CNN mobile apps and CNN.com/Live.

The public can suggest questions for the candidates through this form, or through the CNN Politics fan page on Facebook, or by using the #CNNDebate hashtag on Twitter.

According to a CNN/ORC International poll released Monday, 26% of respondents said they are likely to support Romney, who is making his second bid for the White House. Cain was at 25%, and Romney's margin was well within the poll's sampling error. Texas Gov. Rick Perry was third, at 13%. Separately, a CNN poll of polls indicated that Romney was on top of the field at 23%, with Cain three points behind and Perry - who was a front-runner in the national polls from late August through much of September - at 14%.

Expect rivals to use Tuesday's debate as an opportunity to hammer at both front-runners (Cain over his "9-9-9" tax plan, which recently has helped him rise in the polls, and Romney, in part because he's been at the top of the polls for so long), CNN's Paul Steinhauser writes. Cain says he can feel a bull's-eye on his back, and that he's prepared to go after Romney.

One of the candidates, former Utah Gov. Jon Huntsman, is skipping the debate because, he says, he is taking New Hampshire's side in a fight with Nevada over when to schedule New Hampshire's primary and Nevada's caucuses. New Hampshire law dictates that its first-in-the-nation primary be held at least one week before a similar contest, and this is being complicated by Nevada's decision to hold its caucuses on January 14.

CNN's Truth Squad will be checking the veracity of some of the claims made at the debate. Return to this blog Wednesday morning for the results, and check out the fact-checking from last week's GOP presidential debate in New Hampshire.

So. They’re calling him an “employee” “I agree with Mr. Randolph's opinion and therefore the matter is closetwitter.com/i/web/status/1…6vubUHOh3q
susancandiotti