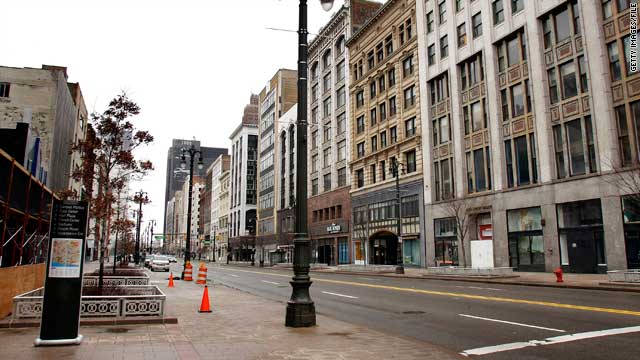 ŌĆ£I know you heard that 50% of the city is in the dark. I wouldnŌĆÖt say that high, but it is a great number,ŌĆØ City Councilman James Tate told CNN Wednesday. ŌĆ£And I donŌĆÖt care what side (of town) youŌĆÖre talking about - east, west, more affluent - you see lights out everywhere."

Strapped for cash like most cities, Detroit officials are trying novel - and controversial - ways to fix the longstanding issue:┬Ā The Detroit Works Project proposed by Major David Bing would shift the cityŌĆÖs resources to the more vibrant neighborhoods, prioritizing working lights, water systems and trash pickup to areas that are heavily invested. On the other hand, blighted areas ŌĆō huge swaths of the city┬Ā - would be divested of resources in a bid to encourage residents to move out of those parts of the city.

ŌĆ£What it does is try to encourage density in certain areas of the city,ŌĆØ Tate said, ŌĆ£because in these areas that have pretty much no one on the block now the challenge is if you have one person who lives there, youŌĆÖve got to provide the services, all of them, garbage collection, water, lighting,ŌĆØ he said.

And itŌĆÖs not just on the east side.

ŌĆ£If you look at Outer Drive, (the lights are) all out both on the east side and west side of the city, and thatŌĆÖs a major thoroughfare,ŌĆØ Tate said.

ŌĆ£We have folks that are taking out some of the coils at the base of the lights,ŌĆØ Tate said. ŌĆ£They are looking for some type of metallic material, but itŌĆÖs of very little value, according to public lighting officials, and it takes out the whole light.ŌĆØ

Also keeping much of the city in the dark is an antiquated lighting system that makes quick-fixes nearly impossible because of the costs. ŌĆ£They donŌĆÖt even make the part anymore,ŌĆØ Tate said of the city's transformers. ŌĆ£So we have to now install an entire different light right now, an entire system just to fix a light that goes out.ŌĆØ

"WeŌĆÖre trying to get people to move to the midtown and downtown areas which are very, very successful and yet lights are out in those areas as well,ŌĆØ Tate said. ŌĆ£So it is literally a public safety issue, because if you canŌĆÖt see the individual committing the crime, they are more likely to continue to commit those crimes,ŌĆØ he said.

"It doesn't make me happy when I go into a neighborhood at night," Chris Brown, the┬Ā city official over the Public Lighting department, told the News. "We've got an obligation to get it done. In the next couple of years we will see a strong improvement of the lighting of those more dense areas, and that's where we're focused on, and that's what we've got to get done," he was quoted as saying.

7:33 pm ET October 25, 2021 RETWEET
Weeks after his special "The Closer" was criticized for its jokes aimed at transgender people, Dave Chappelle has aŌĆtwitter.com/i/web/status/1ŌĆ”zW
cnni