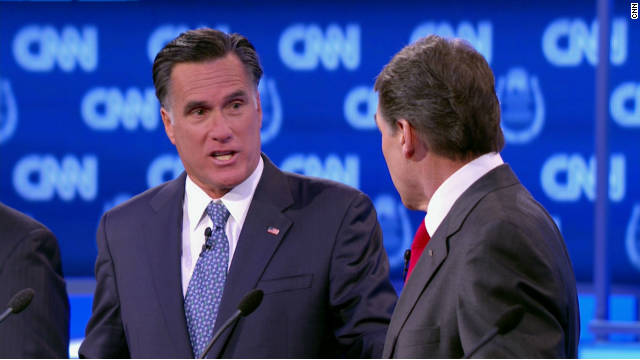 “It will be hard to elect candidates that look like bickering children.” - Armon

With CNN’s Anderson Cooper moderating, the GOP presidential candidates took their gloves of Tuesday night in a presidential debate in Las Vegas. Trading jabs and, at times, speaking over one and other, they mainly attacked Herman Cain’s 9-9-9 plan, “Romneycare” and Mitt Romney's employment of illegal immigrants.

jweller13 said, “This shouting match being called a ‘debate’ is debatable.”

confuztruf said, “The lady really scared me. It was as if she was in another realm or world and someone was asking her questions other than the ones being asked to her on the present stage. And I'm pretty sure that whatever world she was in she was getting standing ovations for answering those questions.”

libsrinsane responded, “And a man with experience, unlike the one in the white house now!”

Cityman said, “Romney showed another side to the smooth, always tempered, well trained puppet of the LDS. He was terrible in this debate. The Boston Globe published an article today on the truth about Romney's Illegal help. He knew but didn't fire the firm until the Globe exposed him for a second time. And, the firm was doing landscaping for the son who couldn't go to Iraq because he was serving his country by helping ‘Dad’ become President. Those were Romney's words in 2008.”

james1095 said, “Yawn. Wake me up when it's time to vote. All of the candidates are going to be fighting tooth and nail, and saying whatever they think people want to hear in order to get them elected. Unless they magically learn to have a civilized and truthful debate, it's a waste of our time.”

jdh2010 said, “This was a nasty look at some power-hungry men wanting desperately to become president. The entire thing was fueled by a careless ‘moderator’ who moderated nothing and allowed it to become a free-for-all. CNN and these pitiful excuses for candidates ought to be ashamed.”

oldbull said, “Once more the GOP shows nothing but contempt for people who can't afford to slide them a grand every now and then ...”

djc84 said, “I learned that Cain is out of touch with reality. But I knew that. I learned that Romney will say anything to get elected. But I knew that. I learned that the only person up there who was consistent, would make a difference, knew what he was talking about and was a true ‘Republican’ was Ron Paul. No one wanted to challenge him and they avoided him like the plague. But I knew all that too. Romney will win the nomination because he has the look and the voice of a POTUS and he is a puppet; perfect to put in power."

judyblueeyes said, “They are all unqualified to be President. I'm sticking with Obama.”

heyyou123 said, “Does Perry refer to all the male candidates as 'brother’ or just the black one?”

ritmocojo said, “I was surprised he didn't call him ‘brotha.’ "

mgcanmore said, “If you assume the Republicans in Congress are behaving the same as the Republicans running for president, it's no wonder President Obama can't get anything done.”

ramseytamimi said, “What we see in these debates is the overwhelming plague that consumes the Republicans. Their campaigns against each other and against the president are solely negative. They attack integrity and character rather than inform Americans how they will change things. Shame on them.”

Danielle202 said, “It used to be that in looking for someone to fill the office of the Presidency we looked to elect the brightest and the best this country could render. Looking at the field of candidates running for the office on the Republican side makes me wonder ‘Is this all there is?’ If so then this is a sad commentary on the capabilities of the Republican Party.”