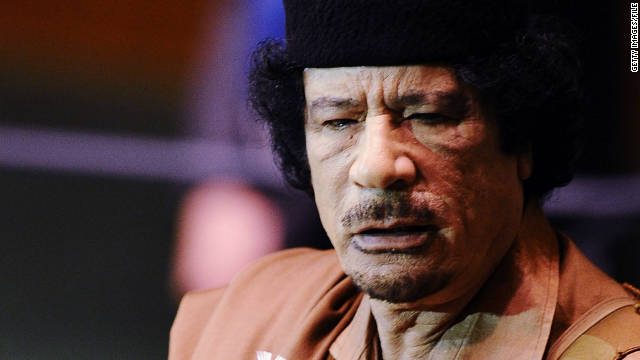 Overheard on CNN.com: Gadhafi images too violent for viewing?

"While I respect CNN's right to play the cell phone video of Gadhafi on the ground, bloodied and apparently dead, must we watch the gruesome video over and over on an apparent loop? One play every few minutes would be plenty for most viewers."–LVH0227

According to Libya's interim prime minister, longtime Libyan dictator Moammar Gadhafi is dead, along with his son Mutassim. A grisly cell phone video aired on Al Jazeera Arabic showed a bloodied Gadhafi with a wound to his head, while news agency Agence France Presse distributed a cell phone photograph showing what appeared to be a severely wounded Gadhafi. CNN could not independently verify the authenticity of the images.

While most CNN.com readers applauded the news of Gadhafi's death, many criticized the airing of the graphic images.

ERG said, "Don't care how bad this guy was, I don't think the world needs to watch a bloodied dead body being jerked around by a crowd. Is this our new Roman coliseum? Gee, maybe we could tweet thumbs up or down next time. Can't we display some humanity even toward a brutal dictator who did not? Watching dead bodies being tossed around is NOT NEWS!"

1gostags asked, "WHY ARE YOU SHOWING THESE IMAGES ON TV?? Why are you glorifying photographic and video images of someone being killed or who has been recently killed? Since when has CNN become completely uncivilized? Just as we wouldn't want to see images of U.S. soldiers being killed or seeing their recently killed dead bodies, these images of Gadhafi being killed should not be shown on television. Why should we glorify this type of bloodlust? Watching people die is abhorrent and inhumane, no matter who it is, and merely saying that he was an inhumane dictator doesn't make it right to show these images."

InfiniteDice said, "I think to celebrate the death of anything is horrible. He's gone. ... good for the people of Libya; no need to act like a bunch of mental patients."

But sanjosemike said, "I disagree. Sometimes a death is a very good thing. This is one of those situations. Gadhafi caused the death of a great many people and sponsored terrorism. Don't forget the Lockerbie bombing. I actually saw the site where the flight went down. It was horrible devastation. It is not always wrong to celebrate a death. This is one of those cases. If the video bothers you, don't look at it."

Jake2055 said, "Each and every world dictator should view these images and imagine their own faces in their place! Maybe if the graphic images of these animals' victims were published every day worldwide, then people would stop treating them like royalty! This animal was responsible for the graphic deaths of thousands. HE GOT WHAT HE DESERVED!"

Epidi said, "Couldn't happen to a nicer guy! I say he got off easy compared to the misery he's spread all these years."