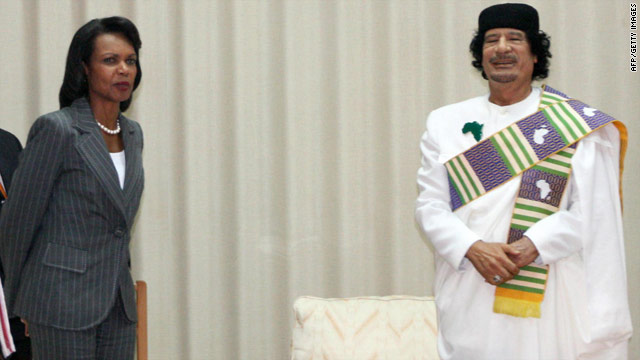 Former Secretary of State Condoleezza Rice says in her new book that Libyan leader Moammar Gadhafi, who was killed Thursday, once played her a video montage of herself set to a tune called “African Flower in the White House,” the Daily Beast reports.

“It was weird, but at least it wasn’t raunchy,” Rice says in an exclusive excerpt from her book obtained by the Daily Beast.

Rice' s trip to Libya attracted considerable attention from the media (In a CNN interview afterward, she called it an "extraordinary moment.").  Not only was it the first visit by a U.S. secretary of state to the North African nation in more than half a century, but Gadhafi also was known to have a serious crush on Rice.

Earlier this year, rebels ransacking his Bab al-Aziziya compound in Tripoli found an album of photos of the former Bush administration official.

The New York Times described the album: "There she is, in one (picture), smiling off to the side, her flip-do accented perfectly for the camera. And there she is in another, smiling next to you-know-who during that visit to Tripoli. … She looks more businesslike in a gray pinstripe suit with white pearls, her flip-do having given way to a page-boy bob."

In her book, "No Higher Honor: A Memoir of My Years in Washington," Rice said the meeting was the culmination of years of negotiations, including a condition that the North African nation renounce its weapons of mass destruction program.

Rice said she had leverage in Tripoli because of the traditional reasons, but also because Gadhafi “had a slightly eerie fascination with me personally, asking visitors why his ‘African princess’ wouldn’t visit him,” the Daily Beast reports.

Against the wishes of her security detail and an aide who had overseen the arrangements of the trip, she accepted an invitation to join the Libyan strongman in his private kitchen for dinner.

“I thought I could take care of myself and went in. At the end of dinner, Gadhafi told me that he’d made a videotape for me. 'Uh oh,' I thought, 'what is this going to be?' It was a quite innocent collection of photos of me with world leaders - President Bush, Vladimir Putin, Hu Jintao, and so on,” she said, according to the Daily Beast.