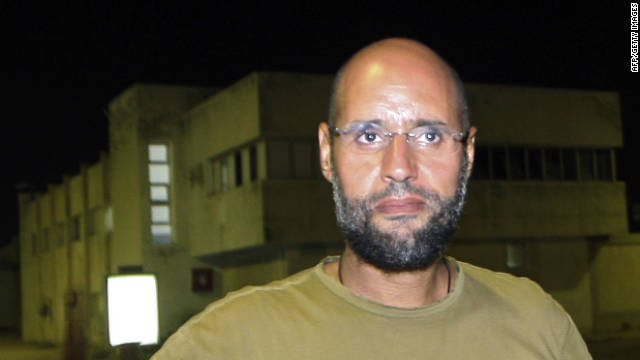 Libyan revolutionary fighters say they are on the trail of Saif al-Islam Gadhafi.
October 21st, 2011
09:31 AM ET

Saif al-Islam Gadhafi - son of deposed Libyan leader Moammar Gadhafi, who was killed in Libya Thursday - is still alive and is being followed by revolutionary fighters, a senior member of Libya's National Transitional Council said Friday.

"We know the area where he is, and for sure he'll be captured very soon," Mohammed Sayeh told CNN's Carol Costello.

Saif al-Islam Gadhafi is wanted by the International Criminal Court on suspicion of crimes against humanity.

Meanwhile, the United Nations has called for an investigation into Thursday's death of Moammar Gadhafi - who the NTC says was killed in crossfire between Gadhafi loyalists and the anti-Gadhafi forces who captured him near Sirte on Thursday - as questions lingered over the last moments of the late Libyan strongman's life.

"There seem to be four or five different versions of how he died," the Office of the U.N. High Commissioner for Human Rights said in a statement. "More details are needed to ascertain whether he was killed in the fighting or after his capture."

From shopping to eating out, virus control measures ŌĆö such as temperature checks ŌĆö are still having an impact on twitter.com/i/web/status/1ŌĆ”4kcVh1
cnni

3:29 am ET February 22, 2020 RETWEET
A Mexican municipal worker visiting his mother in New York endured a "horrific, life-altering trip" after being shoŌĆtwitter.com/i/web/status/1ŌĆ”rq
cnni

3:00 am ET February 22, 2020 RETWEET
A 24-year-old man was killed by an ax-wielding group near a primary school in Australia, following a road rage inciŌĆtwitter.com/i/web/status/1ŌĆ”os
cnni