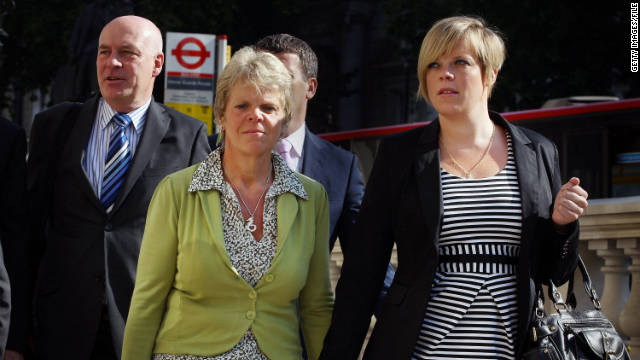 From left, Bob, Sally and Gemma Dowler, the surviving relatives of a phone hacking victim Milly Dowler, were in settlement talks.
October 21st, 2011
10:54 AM ET

News International, publisher of the now-defunct News of the World newspaper in Great Britain, has agreed to pay 2 million British pounds - the equivalent of $3.2 million - to the family of British teen Milly Dowler, who disappeared in 2002 and was later found dead.

Rupert Murdoch, the chairman of chief executive of News Corporation, the parent company of News International, personally apologized to Dowler's family in July amid allegations that News of the World journalists secretly listened to the girl's voicemail after she disappeared.

"As the founder of the company, I was appalled to find out what happened," Murdoch said after speaking with the family in July.

Revelations surfaced in July that journalists working for the News of the World at the time of her disappearance had eavesdropped on Dowler's phone, deleting some of her messages to make room for more. The deletion of messages gave the family hope she was still alive when she was already dead.

Public and political outrage in Britain was immediate and intense, and less than a week after the reports surfaced, News International chief executive James Murdoch ordered the closing of News of the World, a best-selling Sunday paper. James Murdoch is the son of Rupert Murdoch.

Previously, News of the World apologized for hacking into the voice mails of celebrities and politicians, paying compensation to actress Sienna Miller and offering money to others. An out-of-court settlement of 700,000 pounds (U.S. $1.2 million) was paid to English soccer executive Gordon Taylor for "illegal voicemail interception."

UK start-up Small Robot Company is bringing autonomous farming to life with robots that can identify and precisely‚Ätwitter.com/i/web/status/1‚Ä¶PJ
cnni

5:01 am ET September 26, 2021 RETWEET
The US Space Force, the newest branch of the US military, has unveiled a new uniform prototype for its members, kno‚Ätwitter.com/i/web/status/1‚Ä¶Mt
cnni

4:01 am ET September 26, 2021 RETWEET
27-year-old Nathan Paulin walked a 600-meter slackline from the Eiffel Tower to the other side of the Seine river i‚Ätwitter.com/i/web/status/1‚Ä¶jC
cnni

3:01 am ET September 26, 2021 RETWEET
People with a higher consumption of dairy fat have a lower risk of cardiovascular disease than those with low intak‚Ätwitter.com/i/web/status/1‚Ä¶vP
cnni