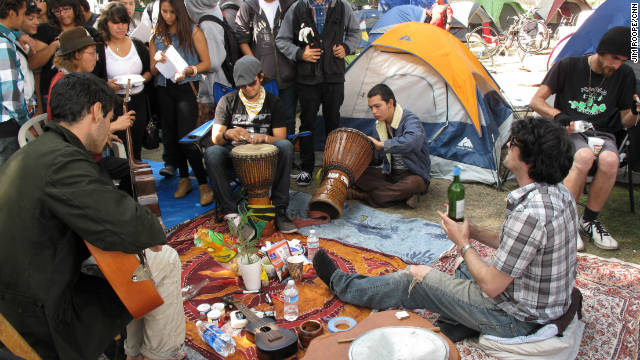 Occupy Los Angeles is a throwback with a contemporary message

The Occupy Wall Street movement that has spread across the globe has many personalities. In Los Angeles, it has the feel and sights of the 1960s.

Hundreds of tightly packed tents are on all sides of City Hall. Young people have feathers and flowers in their hair.

But this Internet-generation protest has a contemporary message, as articulated by protester Billy Singhas.

“Sovereignty,” Singhas said of what protesters are demanding. "We as Americans have gathered here to petition our government, and we would like to see an immediate return to the United States Constitution."

“We are trying to get at least 34 governors to call for a constitutional convention to put the power back in the hands of the 99%,” he said, referring to the assertion of Occupy protesters that the nation's wealthiest 1% holds inordinate sway over the remaining 99% of the population.

There are other causes being championed at the Occupy Los Angeles camp.

Zimmermann also supports the Occupy movement, but he and some like-minded marijuana supporters play music and try to gather more support for their cause while smoking marijuana. Zimmermann said that no one hassles him.

“Yeah, it’s a wonderful thing. My bong is just sitting there,” he said.

Click the audio player to hear the rest of the story from CNN Radio's Jim Roope: