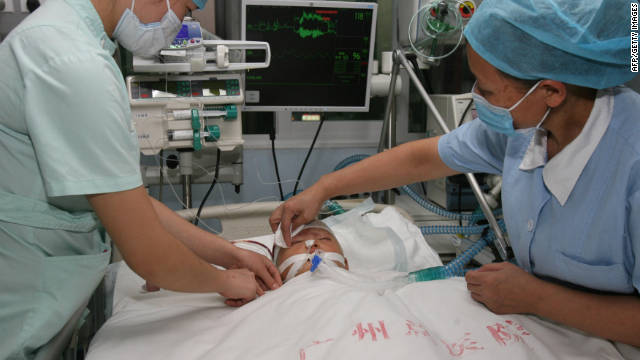 Exchange of the Morning:

"Someone please tell me things are different in the USA."–PointNoted
"Things are quite different here. For one thing, we tend to value human life a lot more."–ShovelingSnw

Chinese toddler dies a week after being hit by cars, ignored by passersby

A Chinese toddler who was hit by two cars and ignored by more than a dozen people before rescue died Friday. The video footage sparked a global outcry about the state of morality in China's fast-changing society. CNN.com readers argued over whether Americans were any better, while some identifying as Chinese or Chinese-American responded.

elfster said, "My heart sank seeing the video in its entirety. The van continued forward upon striking her the first time knowing they ran over a child. It is unthinkable, callous, apathy at its worst. She sustained some serious injuries when the rear wheels rolled over her torso, not to mention the truck that ran over her legs 8 minutes later. To watch passerbys on foot, on motorcycles, and in vehicles look and leave her there is repulsive."

CaitieLady08 said, "I know, I watched it too. Jaw-dropping. I don't understand at all!" Einstein1111 said, "I wonder if this is a general disregard for life in China or if it was the fact that the child was female. It is well known that females are not as 'valuable' in China. I would like to know the thought process on ignoring a severely wounded child in China."

paulbark said, "Lack of bystanders helping is not unique to China. It often happens in the U.S. and elsewhere. Oddly, the more bystanders there are, the less likely someone is to get help from anyone. It's called 'diffusion of responsibility.' " amlesser said, "The 'bystander effect' is a well-documented psychological phenomenon; this has nothing to do with China or human rights."

ken1010 said, "This exact same thing happened in Connecticut where a guy was hit by two cars in broad daylight and people ignored it. Granted, it was an elderly man and not a toddler, but still it shows that we aren't in any position to point fingers as if we have superior moral values."

Some readers said an earlier Chinese court case had made many hesitant to interfere. qdbw said, "This is deeply troubling. As a Chinese, I feel ashamed. However, let me give you some background. There has been multiple instances in China where people who tried to help others who fell on the street were later accused by the injured. In one such instance, the court determined that the person who tried to help must be guilty. Otherwise, he wouldn't have tried to help. He was ordered to pay a large amount to the injured old lady."

CherriH said, " 'Nanjing judge' refers to the infamous 2006 case of a man named Peng Yu who helped a woman to the hospital after she had fallen only to have the old woman accuse him of knocking her down. The Nanjing judge in that case ultimately ruled that common sense dictated that only the person who hit her would take her to the hospital, setting a precedent that continues only further discourages and reinforces many Chinese people's wariness to help others in similar situations.

liuconsis said, "I think in China, we know what is right, but sometimes we dare not to do that, such as criticizing the president, the premier, is that the ting we should do? Sure. But dare we? We dare not, because we are afraid, losing job or even going into jail. That's the main problem, and can we trust our policeman? I think in American are not more upright, but they are more brave. They have a clean government or policeman to trust and rely on, do we have in China? What are the officials doing everyday? We cannot supervise them, because we don't have freedom."