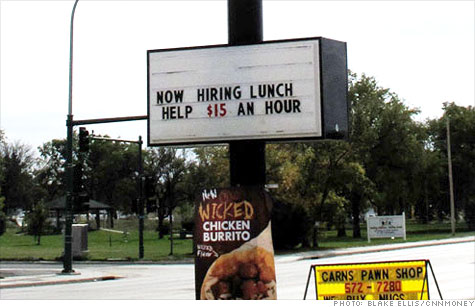 Overheard on CNN.com: No home on the range

Double your salary in the middle of nowhere, North Dakota

New technologies for tapping oil in North Dakota's Bakken formation have transformed nearby towns like Watford City and Williston into boomtowns. While the pay can be excellent for the job seekers moving there, finding a place to live may be next to impossible. CNN.com readers thought it was still a good deal, although some mentioned the weather, and others mentioned environmental concerns.

zooni said, "This is not a story, as many people move for jobs and live in cars. With a 6-figure salary you can buy a luxury camper if there are no rooms."

pianobarb said, "What about trailers? And if they have an extra bedroom, people in North Dakota could start renting out rooms: win-win for everyone. So what if they have to rough it for awhile? They're going to be making beaucoup bucks."

andTimmy replied, "Come out here and try it. ... Everything is taken up west of the Missouri."

IgM2 said, "How about all of the out-of-work contractors and construction teams go up there and build houses? More work for everyone!"

Nick11354 said, "If it were that easy to secure a job and housing (without current employment) more would be doing it." mouthbreathr replied, "I live in one of these small towns in North Dakota, and yes, it is that easy. Oil brings a huge need for service-related industries. The biggest challenge is housing: can't build them fast enough. If people want a job, come to North Dakota. The salaries quoted are real. Downside: it is cold, but manageable."

MickProPer said, "All of these folks who are journeying there to cash in on this oil boom, may change their minds, after they've lived through a North Dakota winter - a 45 mph wind and -40 degrees makes for about -100 degree wind chill!"

Athenais Padgett said, "I'm so sick of people bitching about 'how cold North Dakota gets.' Ya, it get's cold. -30*F in January/February isn't uncommon. But as long as you know how to wear a coat, gloves, scarf, and boots, you'll be fine. I don't think people realize that North Dakota isn't any farther north than Maine is. And our summers are wonderful: no humidity or bugs."

RedDawn2012 said, "How cold is it in North Dakota? I spent January 1972 on a programming job in Grand Forks, ND, and it was a sunny afternoon when I arrived. I was last off the plane and jumped back inside after taking a breath and said to the stewardess, 'What the hell is wrong with the air?' She said, 'Didn't you hear my announcement that it is 35 below zero outside?' "

Not everyone thought the oil boom was a good thing.

When Philo1971 wrote, "This is what America is about. Real Americans do what it takes to make it through tough times. Stories like this make you hate OWS even more. While these people are picking up and moving to the middle of nowhere to support their families the bums at OWS just sit around and whine."

JomoDaMusicM said, "Tough times, lol, ON TEN GRAND A MONTH." and Tex71 asked, "Should Americans HAVE to pick up and move their families out into the middle of nowhere just so they can make ends meet? Is this the best that the wealthiest nation in history has to offer its hard-working citizens? If that is really what you are saying then shame on you."

latuya83 wrote, "This is why we need to allow drilling in this country, there is plenty of oil and gas resources. I'm all for the environment, but we need to keep things in perspective and right now is not the time to go green. We need to stimulate the economy and create jobs first. Once the country is back on track then we can start worrying about green jobs and all the tree huggers."

denvmike replied, "I agree, but first you move to one of the towns where fracking has fouled the local water supply."

Open thread: Talk about the news