Surveillance video from night girl disappeared turned over to authorities

The video, taken from a BP gas station less than two miles from the home where Lisa was last seen, shows an unidentified person walking along the road around 2:15 a.m. October 4.

The station manager, Anuj Arora, said it's unusual to see anyone walking at that time of night in the region.

Arora, who shared the video with CNN on Sunday, said he also turned it over to authorities investigating Lisa's disappearance in hopes it will help in the search for the girl.

The FBI and Kansas City police declined to comment on the video, citing the ongoing investigation.

A tropical depression formed in the western Caribbean Sea on Sunday, and is likely to become Tropical Storm Rina as it skirts the Honduran coastline, the National Hurricane Center said.

The depression was moving northwest at near 12 mph, and was expected to turn west-northwest Monday.

Those at the memorial, held at Conseco Fieldhouse in Indianapolis, recalled Wheldon not only as a successful driver, but remembered his winning charm, his sense of humor, and his devotion to his family and his fans.

Wheldon, 33, was near the back of a 34-car field at the Las Vegas Indy 300 on October 16 when he got mixed up in a crash that saw several cars spin out of control and burst into flames, spewing smoke and debris. He died of head injuries.

"The victories and the accolades, they didn't define him," said IndyCar CEO Randy Bernard. "His strong character, his enthusiastic approach to life, and the love of family, friends and fans did." 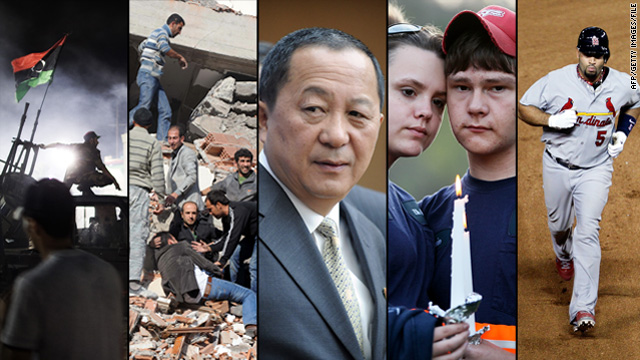 NATO is scaling back its air-and-sea Libyan military operation following last weekâ€™s death of ousted Libyan dictator Moammar Gadhafi as the countryâ€™s interim leaders make plans for a future government. Here is a look at this and other stories CNN plans to follow this week.

NATO to set formal date for end to Libyan operation

NATO is expected to formally decide early this week when to end its military operation in Libya. The alliance's secretary-general, Anders Fogh Rasmussen, already has set a preliminary end date of October 31. NATO forces will be on standby until the end of the month to continue to provide assistance to civilians if needed, he said.

The alliance in March began targeting military targets through airstrikes and missile launches, and enforced a no-fly zone and arms embargo after the U.N. Security Council passed a resolution mandating the protection of Libyaâ€™s civilian population. The resolution came as pro-Gadhafi forces advanced on a rebel stronghold; NATO action by air and sea helped anti-Gadhafi forces in Libya to push back.

NATO aircraft on Thursday struck a convoy of vehicles, one of which contained Gadhafi, though the alliance says it didnâ€™t know Gadhafi was in it at the time. Libyan revolutionary fighters captured Gadhafi after the strike, and Gadhafi died a short time afterward. The United Nations and two major human rights groups have called for an investigation into the circumstances of his death.

END_OF_DOCUMENT_TOKEN_TO_BE_REPLACED

U.S. Rep. Gabrielle Giffords arrived in North Carolina on Sunday to undergo "intensive" rehabilitation as she continues her recovery from being shot in the head in a mass shooting in January, her office said.

A statement from the office said Giffords will be working with a therapist who treated her previously in Houston. The statement did not identify the therapist or any medical facility in Asheville involved.

Hosts New Zealand edged out France 8-7 in a nailbiting finish to the Rugby World Cup final in Auckland Sunday to win the William Webb Ellis trophy for the second time.

It was a repeat of their success in the inaugural competition on their home soil in 1987, but it was far from the easy victory that many had predicted.

Watched by a capacity 61,000 in the Eden Park Stadium, and with the hopes of a rugby-mad nation on their shoulders, the All Blacks led 5-0 at halftime thanks to a try from prop Tony Woodcock.

Two Spaniards and an Italian were kidnapped overnight in Algeria from a Western Sahara encampment where they were providing aid, officials said Sunday.

Spain's Foreign Ministry said it has contacted the families of its two nationals, a man and a woman, but declined to provide details about them or the circumstances of the kidnapping.

The Italian Foreign Ministry also confirmed the kidnapping of its national, a woman.

The abductions occurred in the Raguni refugee encampment in the Algerian province of Tinduf, across the border from Western Sahara, a territory in dispute between Morocco and the Polisario Front.

Spanish news reports - citing Spanish aid organization colleagues of the two Spaniards kidnapped - said there apparently were shots fired during the kidnapping and that at least one of the three captives may have been injured.

The far-right Swiss People's Party put up shocking anti-immigration posters four years ago and took the largest share of the vote in the country's modern history. So they're doing it again this time around.

A poster in the German-speaking part of the country shows black boots marching over the Swiss flag.

One in French-speaking areas shows a condom plastered over the European Union's banner, proclaiming "Swiss protection against the European virus."

And the scare tactics seem to be working.

The anti-immigrant party looks set to repeat its 2007 election victory on Sunday, with opinion polls putting it in first place as voters cast ballots for the federal parliament.

A Eurobarometer survey this month put the party, known as the SVP, far ahead of its main rivals, with just under a third of people saying they would back it.

The Social Democrats (SP) are in second place, with about 20% support, followed by the FDP Liberals, the Christian Democrats and the Greens.

The People's Party won the biggest election victory in Swiss history in 2007, after a controversial campaign that blamed foreigners for much of the country's crime.

The nationalist party rode a wave of anti-immigration sentiment to gain 29% of the vote - about the same that it is getting in opinion polls this month.

But anti-immigrant sentiment helped fuel a 2009 ban on the construction of minarets, the towers usually built next to mosques for the traditional call to prayer.

Gadhafi's autopsy reveals he was shot in head

Doctors completed the autopsy of Moammar Gadhafi on Sunday, with the chief pathologist confirming the former Libyan leader died of a gunshot wound to the head.

Dr. Othman el-Zentani would not disclose additional findings, such as whether the findings revealed if Gadhafi suffered the wound in crossfire or at close-range.

Zentani said the report will now go to the attorney general's office before it is released to the public.

Doctors performed the autopsy at a Misrata hospital in the presence of officials from the prosecutor's office, Zentani said.

No foreign or independent officials were present, he said.

Autopsies were also conducted on the bodies of Gadhafi's son, Mutassim, and his former defense minister, Abu Baker Yunis.

The three bodies would likely return to a cold storage unit

The family of a woman who died three years ago wants to know whether she is the victim of a suspect accused of locking up four peopleÂ  in a Philadelphia basement.
Maxine Lee, 39,Â  died in 2008 in Norfolk, Virginia.
She was a roommate of Linda Weston, the accused ringleader of a group charged with locking up four mentally disabled adults in an apartment's boiler room.
"I want police to re-open this. I do," her sister, Tracey Lee, told CNN.Â  Lee said her family believes she died under suspicious circumstances.
The suspects are charged with kidnapping, aggravated assault, false imprisonment, unlawful restraint, criminal trespass, and conspiracy. The alleged victims were discovered severely malnourished, without food, and left with buckets to go to the bathroom. A landlord discovered them and called police.
Maxine Lee died after disappearing several years earlier. She had last worked as a security guard after jobs with the post office and the IRS, her family told CNN.

5:45 am ET January 29, 2023 RETWEET
19-year-old Olesya Krivtsova is under house arrest after she was charged over social media posts that authorities sâ€twitter.com/i/web/status/1â€¦w3
cnni

5:45 am ET January 29, 2023 RETWEET
19-year-old Olesya Krivtsova is under house arrest after she was charged over social media posts that authorities sâ€twitter.com/i/web/status/1â€¦w3
cnni