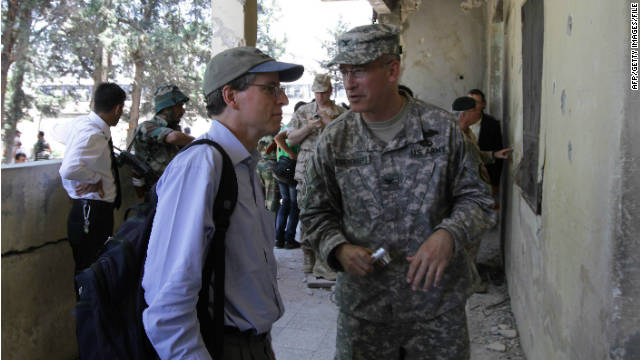 Ambassador Robert Ford, left, has been outspoken against the Syrian government's use of violence against protesters.
October 24th, 2011
07:27 AM ET

U.S. pulls ambassador from Syria after 'credible threats' against safety

[Updated at 7:27 a.m. ] The United States has pulled its ambassador out of Syria as a "result of credible threats against his personal safety," State Department spokesman Mark Toner said Monday, accusing Syria of "incitement" against Ambassador Robert Ford.

At this point, we can't say when he will return to Syria," Toner said in a statement.

Ford was confirmed as ambassador to Syria in April after five years during which Washington did not have an envoy in Damascus.

Is candy corn a trick or a treat when you put it in bratwurst? CNN's Jeanne Moos reports on the latest gross-soundiâ€twitter.com/i/web/status/1â€¦9F
cnni

11:31 pm ET October 15, 2021 RETWEET
An Apple employee who led organizing efforts against harassment and discrimination within the company said she hasâ€twitter.com/i/web/status/1â€¦2K
cnni