House passes bill that would grant DC statehood. The legislation now faces an uphill fight in the Senate.‚Ätwitter.com/i/web/status/1‚Ä¶5K

Another 547,000 US workers filed jobless claims last week, adjusted for seasonal swings -- a new low since the star‚Ätwitter.com/i/web/status/1‚Ä¶kt

Biden will announce today the US aims to reduce its greenhouse gas emissions by as much as 52% by 2030 to address t‚Ätwitter.com/i/web/status/1‚Ä¶AR 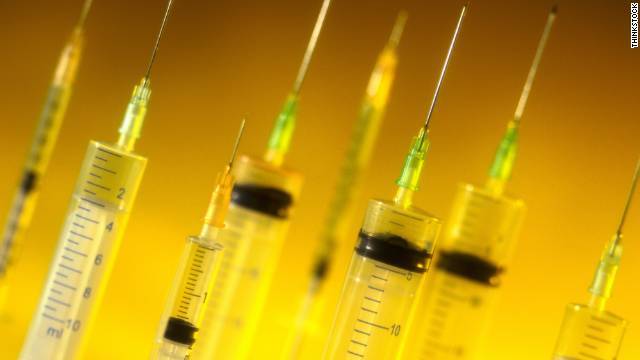 ‚ÄúBravo! Give the True Believers and other spooky types something new to whine about. We could be back in the 14th century and they would be complaining about radical proposals ‚Äî like hand washing.‚Äù -¬ÝEideard

‚ÄúOh the government forcing you to hand wash? Oh the humanity!! I would rather die of cholera than listen to scientists, doctors, and microbiologists. - Thoughtocrat

A federal government advisory committee voted Tuesday to recommend that boys and young men, from age 11 to 21, be vaccinated against the human papilloma virus, commonly referred to as HPV (the No. 1 sexually transmitted disease in the nation).

Many CNN.com readers welcomed the news while other readers said the vaccination for boys was unnecessary. Some argued the recommendations would merely help pharmaceutical companies and others said promoting safe sex was a better solution.

deblee7571 said, ‚ÄúGood move by the CDC! It's the boys without visible symptoms who have infected all the girls in the first place! This is an epidemic that plagues a high percentage of our young people under 30. It's about time we take it out of the closet!‚Äù

MindFire07¬Ýsaid, ‚ÄúI'd rather be protected than risk exposure and a full-blown infection. I would much rather follow the advice of doctors and scientists than the ignorant and the witless.‚Äù

END_OF_DOCUMENT_TOKEN_TO_BE_REPLACED 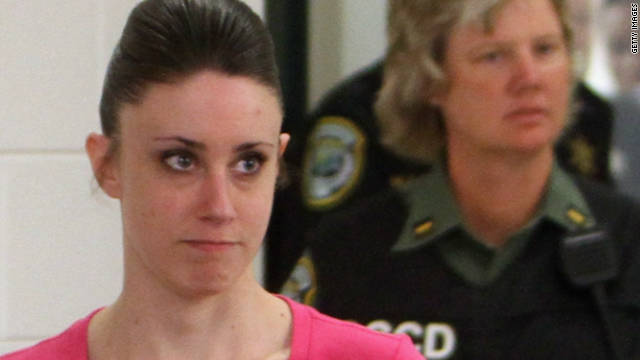 Florida court officials on Tuesday released the names of the Casey Anthony trial jurors, after the expiration of a three-month ‚Äúcooling-off‚Äù period that a judge imposed because of concerns for the jurors‚Äô well-being.

CNN -¬Ýnoting the judge‚Äôs concerns that jurors might face threats from elements of the public after acquitting Anthony in the high-profile murder trial -¬Ýwill not name any jurors who haven‚Äôt come forward to identify themselves.

Anthony was released in July after being acquitted on charges of murder, aggravated manslaughter and child neglect in connection with the death of her 2-year-old daughter, Caylee Anthony, whose skeletal remains were found in 2008 in a wooded field in Orange County, Florida.

Casey Anthony was convicted on four counts for misleading law enforcement and was sentenced to four years in prison, but was released after serving nearly three years in prison while awaiting trial.

Only three of the 17 jurors ‚Äì one who was among the 12 who deliberated, and two who were among the five alternates ‚Äì have revealed their identities voluntarily since the trial ended. A few others, including the jury foreman, have given interviews on the condition of anonymity.

Though the trial happened in Orange County, the jurors came from Pinellas County ‚Äì about 110 miles to the southeast - because authorities hoped to find a jury pool less likely to have been swayed by the intense media coverage surrounding the case.

Cecilia Barreda, a Pinellas County Sheriff‚Äôs Office spokeswoman, said she is aware of no requests for security by any juror.

‚ÄúOur deputies are aware of the release of the names, and we‚Äôre prepared to address any complaints or concerns as needed,‚Äù Barreda said Tuesday.

END_OF_DOCUMENT_TOKEN_TO_BE_REPLACED

All 29 people aboard were alive.

This story is developing. We'll bring you more information on this story as soon as we get it. 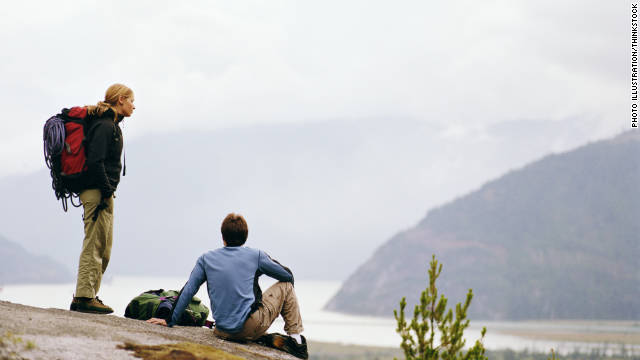 LZ Granderson says Americans ask the question "What do you do for a living?" as a measuring stick far too often.
October 25th, 2011
01:07 PM ET

Overheard on CNN.com: There‚Äôs more to life than an impressive job

"I always try to avoid this question. Not because of where it ranks me and my conversation counterpart against each other and the rest of society, but because for most people, your job isn't the best part of your day to begin with." –Guest

Going beyond what people do

CNN.com columnist LZ Granderson, who is also a senior writer and columnist for ESPN the Magazine and ESPN.com, says Americans love to ask strangers: "What do you do for a living?" He believes the once-innocent question is now used to judge people more often than not, especially during a bad economy. LZ says, ‚ÄúWe should be less focused on the material and more on the worth of people.‚Äù

And CNN.com readers mainly agreed with him, but a few defended the question as a means to genuinely get to know someone.

Armymom48 said, ‚ÄúWhen someone I love became disabled and told me how badly they felt having to answer the question ‚ÄòWhat do you for a living?‚Äô because all they could think of to say was ‚ÄòI'm disabled,‚Äô I changed my own behavior and starting asking ‚ÄòHow do you keep yourself busy?‚Äô This gives people a chance to talk about the things they enjoy most about their lives whether it‚Äôs a job or a hobby or family or whatever. It also, for the most part, eliminates making anyone feel like they have to be ashamed or apologize or make excuses for what someone else might see as a shortcoming.‚Äù

anon12389211 said, ‚ÄúI was unemployed at one time and I hated it when people asked me that question.‚Äù

END_OF_DOCUMENT_TOKEN_TO_BE_REPLACED

A report from the human rights organization sharply criticizes the Caribbean nation's police, saying they have been behind "scores of cases of killings, torture and ill-treatment."

"Police killings should not become the way to solve the problem of repeat offenders and warn young people against crime," Javier Zuniga, the head of Amnesty's delegation to the Dominican Republic, said in a statement.

Speaking to CNN before Amnesty released its report, National Police spokesman Col. Maximo Aybar said police in the Dominican Republic were committed to protecting the public.

"We are more than aware that we are here to defend members of society, not to assault them. And that is an institutional position. In those cases where excesses may have been committed, investigations have occurred and measures have been taken: members were suspended from their posts and placed at the disposition of the courts," he said.

Police were responsible for at least 260 of the nation's 2,472 homicides in 2010, Amnesty International said, citing statistics from the National Police and the Prosecutor General. That figure marked a decrease from previous years. In 2008, for example, police were responsible for 19% of the killings in the nation. Details about the circumstances of those killings were unclear.

Somalia's president has spoken out against Kenya's military incursion into his country, saying his nation's African neighbor has overstepped its bounds by pursuing Islamic militants far from its own borders.

Somali President Sharif Ahmed said Monday that the strike degrades the trust built up between the two countries over the past few decades, and called Kenya's actions "not good."

His comments contradict a joint Somali-Kenyan communique issued three days after the Kenyan incursion, declaring Al-Shabaab "a common enemy to both countries" and pledging to work together to stabilize Somalia and cooperate in security and military operations.

Kenyan forces entered Somalia on October 15 in a strike on Al-Shabaab, a Somali militant group that Kenya blames for the recent kidnappings of foreigners from northern Kenya.

[Updated at 11:40 a.m. ET] A 2-week-old baby and her mother were rescued alive from the rubble of an apartment building in eastern Turkey, two days after an earthquake in the region toppled buildings and killed more than 400 people.

Rescuers also pulled the baby's paternal grandmother from the rubble, but it was not immediately clear whether she was alive. She was carried to a vehicle on a stretcher.

Dramatic video showed tiny Azra Karaduman being carried by rescuers to a vehicle that would take her to the hospital. They were holding a mask over her mouth to help give her oxygen.

The girl's father remains trapped somewhere under the rubble of the multi-story building, officials said.

[Initial post, 7:29 a.m. ET] A 2-week-old baby was pulled alive from the rubble of an apartment building Tuesday in eastern Turkey, two days after a devastating earthquake.

Dramatic video showed rescuers carrying the small baby to a vehicle. A rescue operation is under way to reach the girl's mother and grandmother, officials said. They are being provided with oxygen until rescuers can get to them.

The child's father is under the rubble somewhere as well, officials said. A relative said the baby was born three weeks prematurely.

If it wasn't for bad weather, poorly designed watercraft or well executed naval attacks, what would marine archaeologists do? This past year has brought to us a wealth of shipwreck discoveries and allowed our modern era better insight into the ships of the past. If you don't believe Davey Jones still has some fascinating discoveries held captive below the high seas, avoid walking the plank and just check out these videos.

13th Century Mongol ship discovered - They were the peak of land warfare in their time, and perhaps the crew of a sunken Mongol ship regrets leaving the firm ground of Asia behind for the Japanese islands. In a truly rare find, marine archaeologists in Japan uncovered the remains of a ship from a Mongol invasion fleet dating back to 1281. The team believes wreckage could provide better insight into attacks on Japan around that time period.

END_OF_DOCUMENT_TOKEN_TO_BE_REPLACED 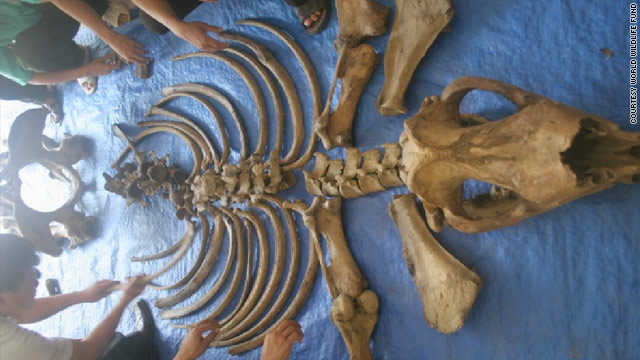 Vietnam's rare Javan rhinoceros was declared¬Ýextinct in that area after poachers killed the last¬Ýremaining animal in the country for its horns, the World Wildlife Fund said.

‚ÄúVietnam must see this loss as another warning sign of its looming wave of species extinctions,‚Äù Dr. Barney Long, WWF‚Äôs Asian species expert, said in a statement. ‚ÄúThe single most important action that is needed to save remaining threatened species like tigers and elephants is protection.‚Äù

END_OF_DOCUMENT_TOKEN_TO_BE_REPLACED

Worried travelers and those living on Mexico's Yucatan Peninsula were waiting and watching Hurricane Rina on Tuesday after the storm intensified to a Category 2 and appeared poised to make a near-direct hit on the resort town of Cancun later this week.

Rina's maximum sustained winds were near 100 mph Tuesday morning, according to the Miami-based National Hurricane Center. "Additional strengthening is forecast during the next day or so and Rina could become a major hurricane by tonight or early Wednesday," forecasters said.

Forecast models show Rina strengthening into a major, or Category 3, hurricane before approaching the Yucatan. The projected path shows Rina back at Category 2 intensity when it takes aim at Cancun on Thursday.

10:00 am ET - European debt crisis hearing - The news is full of stories about European countries and their problems with debt, but what does that mean for the United States?¬Ý A House subcommittee looks into that issue.

END_OF_DOCUMENT_TOKEN_TO_BE_REPLACED

A photographer has captured a gigantic superyacht weaving through the narrow canals of the Netherlands‚Ätwitter.com/i/web/status/1‚Ä¶Fx
cnni

5:47 pm ET April 22, 2021 RETWEET
@luvbugley Nope I‚Äôm the streets of Minneapolis picking up and loving on other people‚Äôs dogs!!!
sarasidnerCNN

5:46 pm ET April 22, 2021 RETWEET
This is self care to me. What is yours? Whatever it is get that. #dogsoftwitter https://t.co/P60iORANed
sarasidnerCNN

4:16 pm ET April 22, 2021 RETWEET
The evidence on whether it's advisable to wear masks outdoors isn't black and white, and should be based on a varie‚Ätwitter.com/i/web/status/1‚Ä¶ZB
cnni