Miami Dolphins quarterback Tua Tagovailoa was taken off the field on a stretcher during a game against the CincinnaŌĆtwitter.com/i/web/status/1ŌĆ”g5

The FDA has approved a new ALS drug that was backed by patients and advocacy groups. Its study had been partly fundŌĆtwitter.com/i/web/status/1ŌĆ”fG 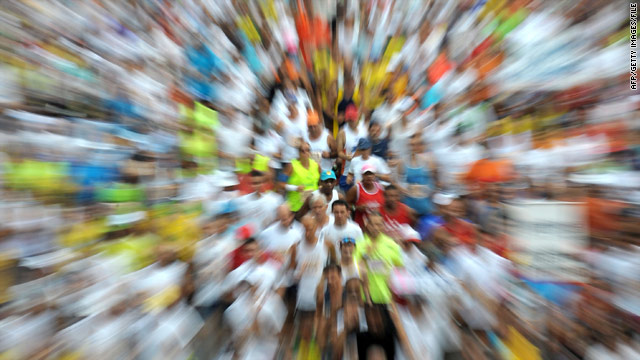 Perhaps the occasion will allow us to realize that we need to pay more attention to better tracking our growth and impact - our literal footprint on Earth. For some, there will be the typical celebrations: a baby wrapped in a blanket declared the 7 billionth person to enter this world as hospitals debate which baby was actually the one that hit the marker, similar to what has happened┬Āwith milestones in the past.┬Ā (If you're curious where you fall in the mix, Population Action International has a handy "What's your number?" interactive based on your birth date.)

"While seven billion is a nice round number, knowing the identity of the lucky baby or the exact moment the threshold is crossed isn't really any more important than pulling over to the side of the road to bask in your car's 100,000th mile. But the building blocks for world population estimates ŌĆö national demographic statistics and characteristics ŌĆö are used by governments, businesses and aid groups to plan spending and spot potential trouble spots."

"The milestone of 7 billion is marked by achievements, setbacks┬Āand paradoxes," a United Nations Population Fund report begins. (Read the report in PDF form)

The U.N. has teamed up with the company SAP to help make those decisions easier by creating a widget on the site 7billionactions.org that allows you to┬Āassess the world's population┬Āby age, socioeconomic status and education levels, and to compare trends from country to country. The goal is to help┬Āgovernments assess their needs for the future. 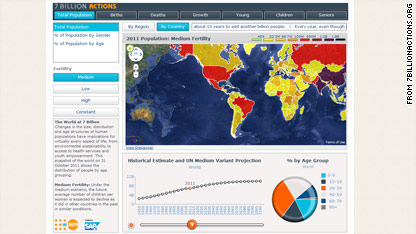 MSNBC's photo blog takes a visual look at the effect that we have on the world each day and how we tax the environment: through┬Ādeforestation, pollution from developing countries and traffic jams, as well as the struggle to cultivate all of the food and crops necessary to feed our growing population. That imprint will only grow as more of us inhabit the planet, the accompanying article says.

And Roger Martin's article in the UK's Guardian newspaper┬Āsays the growing population could cost us the planet we live on in the way we now know it.

"Every additional person needs┬Āfood, water and┬Āenergy, and produces more waste and pollution, so ratchets up our total impact on the planet, and ratchets down everyone else's share ŌĆō the rich far more than the poor. By definition, total impact and consumption are worked out by measuring the average per person multiplied by the number of people. Thus all environmental (and many economic and social) problems are easier to solve with fewer people, and ultimately impossible with ever more."

"For centuries population pessimists have hurled apocalyptic warnings at the congenital optimists, who believe in their bones that humanity will find ways┬Āto cope and even improve its lot. History, on the whole, has so far favored the optimists, but history is no certain guide to the future. Neither is science," Robert Kunzig wrote. "It┬Ācannot predict the outcome of People v. Planet, because all the facts of the case ŌĆö how many of us there will be and how we will live ŌĆö depend on choices we┬Āhave yet to make and ideas we have yet to have."

EU governments have agreed to tax the windfall profits of oil and gas companies and to cap the revenues of some eleŌĆtwitter.com/i/web/status/1ŌĆ”9i
cnni

11:45 am ET September 30, 2022 RETWEET
ŌśĢ’ĖÅ Your coffee habit could help protect you from an early death, a study scnn.it/3rgo1pL6MqW
cnni

11:24 am ET September 30, 2022 RETWEET
Artificial intelligence is getting better and better at generating an image in response to a handful of words. Now,ŌĆtwitter.com/i/web/status/1ŌĆ”Ll
cnni

EU governments have agreed to tax the windfall profits of oil and gas companies and to cap the revenues of some eleŌĆtwitter.com/i/web/status/1ŌĆ”9i
cnni

11:45 am ET September 30, 2022 RETWEET
ŌśĢ’ĖÅ Your coffee habit could help protect you from an early death, a study scnn.it/3rgo1pL6MqW
cnni

11:24 am ET September 30, 2022 RETWEET
Artificial intelligence is getting better and better at generating an image in response to a handful of words. Now,ŌĆtwitter.com/i/web/status/1ŌĆ”Ll
cnni

8:36 am ET September 30, 2022 RETWEET
Ukrainian officials say 23 people have been killed and 28 injured in an attack by Russian forces on a civilian convŌĆtwitter.com/i/web/status/1ŌĆ”O5
cnnbrk

3:40 am ET September 30, 2022 RETWEET
ŌĆ£After the seven years, my time is upŌĆØ ŌĆ£The Daily ShowŌĆØ host Trevor Noah has announced he will step away frtwitter.com/i/web/status/1ŌĆ”KEQaxzpAtY
cnnbrk

10:38 pm ET September 29, 2022 RETWEET
Miami Dolphins quarterback Tua Tagovailoa was taken off the field on a stretcher during a game against the CincinnaŌĆtwitter.com/i/web/status/1ŌĆ”g5
cnnbrk