Aid workers kidnapped in Somalia are alive and well

"I have been told that contact was established today, and I am pleased to announce that both Poul and Jessica are doing well given the circumstances," said Ann Mary Olsen, head of the council's international department. 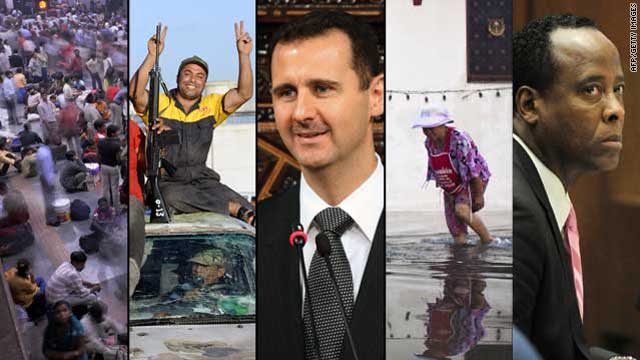 Charities working in Thailand have warned of the risk of water- and insect-borne diseases in the coming weeks in Thailand, which is battling what the government is calling the nation'sÂ worst flooding in half a century.

The floods, caused by monsoon rains that saturated rivers, have killed at least 373 people nationwide and affected more than 9.5 millionÂ of the country's roughly 66 million people.

Areas in Bangkok's outlying districts were covered with waist-deep water Sunday. Thais have questioned whether resources may be dwindling, including whether electricity and tap water will be available to residents, with a water utility saying algae is slowing down its tap-water processing. Â But the prime minister assured residents Saturday that tap water and electricity would be available, though with disruptions.

The prime minister said the flood waters would likely reduce by this week if relevant agencies control the drainage.

After seven months of an aerial bombing campaign that helped depose longtime ruler Moammar Gadhafi, NATO isÂ scheduled to end its mission in Libya on Monday.

END_OF_DOCUMENT_TOKEN_TO_BE_REPLACED

Libya's transitional government would prefer to try former leader Moammar Gadhafi's son Saif al-Islam in a Libyan court despite an arrest warrant issued for him by the International Criminal Court, a spokesman said Sunday.

The court's chief prosecutor said Friday it was having "informal conversations" about the surrender of Saif al-Islam Gadhafi, who is wanted for crimes against humanity. But Luis Moreno-Ocampo said the court did not know his whereabouts and would not reveal with whom the court is talking.

Saif al-Islam Gadhafi has realized there is no escape, and wants to negotiate a surrender to limit the damage, said Anees al-Sharif, spokesman for the National Transitional Council's Tripoli Military Council.

Flames and thick black smoke filled the skies above Sanaa International Airport on Sunday after an explosion struck a nearby air base, senior officials said.

However, a senior official with the Interior Ministry said the explosion was caused by a bomb planted near the airport. He declined to speculate who might have planted the explosive device.

The cancellations affected more than 600 flights and 70,000 passengers, Qantas said.

At Sydney airport, columns of "canceled" illuminated the departure board. Throngs of weary passengers crowded the help desk to rebook with other airlines as suitcases lay scattered all over the floor.

"It makes me wonder whether I would book with Qantas again," said Isabelle Storer, who was stuck at the airport with her husband after a visit to the United States.

Their connection to Adelaide was canceled, leaving her frustrated because her husband needed medical treatment, she said.

Passenger Ron Fuller waited at the airport, albeit more optimistic.

"For a month or two, everyone will be anti-Qantas, there's no doubt about that," Fuller said. "But emotion probably gets in the way sometimes."

In a statement, Qantas pilots slammed the airline's chief executive for grounding the entire fleet, saying it is unfair to passengers, shareholders and workers.

"Alan Joyce obviously thinks Qantas is his personal plaything to use in his high-stakes game against pilots and other workers," said Richard Woodward, the president of the Australian and International Pilots Association.

Militias from the Libyan city of Misrata have beaten and killed displaced residents from the nearby town of Tawergha, accusing them of siding with pro-Gadhafi forces and committing violent crimes in Misrata, according to a report by Human Rights Watch.

The rights group said Sunday it interviewed dozens of Tawerghans across the country, including those detained or displaced.

"They gave credible accounts of some Misrata militias shooting unarmed Tawerghans, and of arbitrary arrests and beatings of Tawerghan detainees, in a few cases leading to death."

CNN could not immediately verify the claims.

The group said pro-Gadhafi forces used Tawergha as a base for attacks on Misrata and the surrounding area from March until August. Many Tawerghans supported the 42-year ruler, whose regime claimed that Libyan opposition fighters would enslave Tawerghans if they took power, Human Rights Watch said.

A South Sudan rebel group warned the United Nations and residents to leave a remote border state within three days or risk coming under fire as it launches an attack on the local government.

The South Sudan Liberation Army said Saturday it was headed to Warrap state after an earlier attack on Mayom town in neighboring Unity state.

Both states are in South Sudan, near the border with Sudan.

The goal is to "liberate" the state from the government in Juba, the group said in a statement.

"Within few days, the people of Warrap will be liberated from abject poverty, corruption and abuse of human rights," the militia said. "We would also advise the civilians to evacuate all towns and move to villages in order to be safe," it said.

Palestinian Islamic Jihad announced an immediate cease-fire with Israel on Sunday following a sharp rise in violence in the past several days.

Islamic Jihad "will cooperate with the cease-fire, but maintains our right to resist the aggression," a spokesman for the military wing of the group told CNN, adding that calm "will depend upon the behavior of the occupation," a reference to Israel.

The deal was brokered by Egypt, said Abu Ahmed, as the Islamic Jihad representative refers to himself.

Israel did not immediately confirm there had been a deal, which Islamic Jihad announced hours after the Israeli Air Force struck several sites that it suspected were "terror centers" Sunday.

The air force said the Sunday attacks targeted three suspected rocket launching sites and one "terror tunnel" in northern Gaza; and two "terror activity" sites in southern Gaza, as the wave of back-and-forth attacks between the Israeli military and Palestinian militants continued.

No one was hurt in the attacks, security forces in Gaza said.

On Saturday, at least 10 people were killed in Gaza and southern Israel.