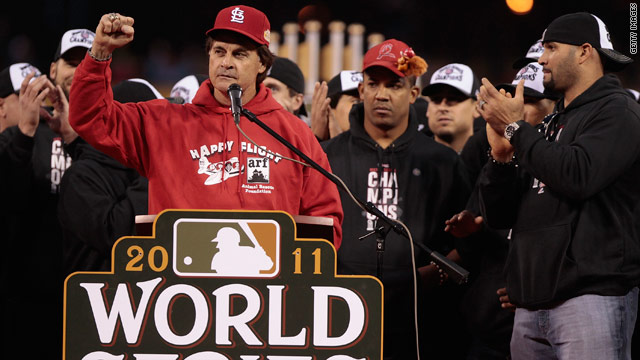 Tony La Russa, the manager of the St. Louis Cardinals, announced Monday he is retiring after 33 seasons as a manager in professional baseball. The Cardinals capped an improbable comeback last week by defeating the Texas Rangers to win the World Series.

"It's just time to do something else," he told reporters at Busch Stadium. "I know if I came back, I'd come back for the wrong reasons, and I couldn't do that."

La Russa, 67, ranks third in baseball history in managerial victories with 2,728, behind Connie Mack (3,731) and John McGraw (2,763). He is the only manager in Major League Baseball history to win multiple pennants in both leagues and the second to win a World Series title in each.

After 16 years as manager of the Cardinals, he broke the news to the team Sunday night in the weight room. "I was encouraged that some grown men cried," he said. "I kinda liked that because they made me cry a few times."

A "ring of fire" solar eclipse was visible in parts of the Northern Hemisphere as the moon partially blocked out thâ€twitter.com/i/web/status/1â€¦b5
cnni

11:31 am ET June 13, 2021 RETWEET
A Massachusetts high school senior made a request for her school to give her $40,000 scholarship to a community colâ€twitter.com/i/web/status/1â€¦Ld
cnni