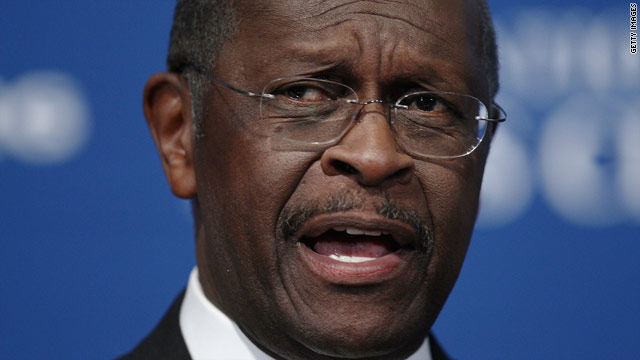 Comment of the morning:
"Don't blame the Dems for this one. The Republicans are starting to eat their young." - Nevis

GOP presidential candidate Herman Cain told Fox News he had "never sexually harassed anyone" in response to a Politico report alleging that two women employees settled with the National Restaurant Association after complaining about him when he led that group in the 1990s. The women's names were not released. John Avlon, a CNN political contributor, said Monday that while Cain needs to address the allegations, the story may "smack of opposition research" by another campaign.

Many CNN.com readers said Cain had a right to know his accusers and others said he should just come clean if the story's true. MotherLodeBeth said, "Unless the women come forward and can be grilled on the facts and why they settled, it's all hearsay to me."

Motley said, "Anyone can make allegations of any nature; it does not mean they are true, nor does it mean that if two women did receive separation packages that it was due to harassment. Sorry, I prefer facts to judge someone other than rumors and allegations."

Mr. America said, "He should just say, 'Yes I did it, let's move on.' Now they will get him on lying. Same problem Clinton had."

Many pointed fingers at the Republican Party. pinarello said, "How convenient. Cain starts to gain some traction, and the smears start coming in." Desmond, A Canadian said, "Here they come, typical GOP dirty smears, completely predictable. A sign that Cain is a force to contend with. We all knew that this was going to be an ugly election."

once upon a horse said, "So they are so sure that liberals are the ones that started this, huh? Well lately it seems that it's been more Republicans going after Cain than the left." kravitz said, "Politico is a Republican-owned publication with a conservative Republican tone, not a 'liberal' or even moderate one."

Other CNN.com readers asked who care? Observer said, "Cain's statement that he opposes abortion for any reason tells us all we need to know about his intelligence. This story doesn't matter after that." Bigred said, "Based on his experience in politics, his real grasp of America's political and economic realities, and his knowledge of the works of Washington - all of which amount to zero - we would be hard-pressed to find a less capable candidate."

Brannon said, "Herman Cain was never convicted of sexual harassment. So I couldn't care less. Heâ€™s still a brilliant, educated, uncorrupt from the government man with a plan."

Ron said, "I suppose if you dig enough there is bound to be some dirt in everyone's past. Herman Cain is no exception. Let's see how this plays out ..."

Everaldo Jones said, "I don't think a little sexual innuendo should stand between the country and the leadership it needs. We are electing a commander in chief, not a pope."

At least seven children were killed and at least 16 people injured on Tuesday after a gunman opened fire in a schooâ€twitter.com/i/web/status/1â€¦Hq
cnni

10:23 am ET May 11, 2021 RETWEET
Covid-19 has devastated major Indian cities, with hospitals running out of oxygen and medicine. But in rural stateâ€twitter.com/i/web/status/1â€¦ga
cnni

10:17 am ET May 11, 2021 RETWEET
Pollution from food production in the United States is linked to an estimated 15,900 air quality-related deaths eacâ€twitter.com/i/web/status/1â€¦QU
CNNweather