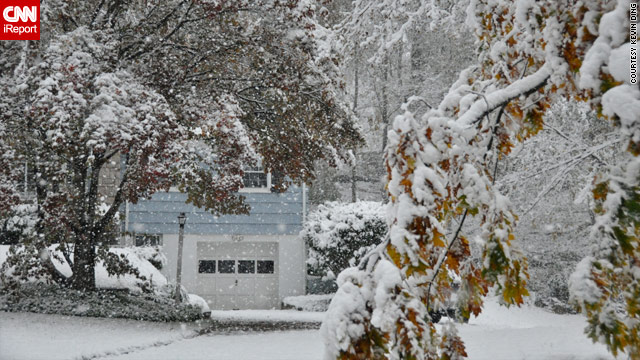 Overheard on CNN.com: We need a better grid

"The British economy is so much more efficient than the U.S.: we get the same results from 1 inch of snow that you do from 2 feet!"–aleximor

Nearly 2 million without power as Northeast recovers from storm

An unusual October snowstorm buried parts of the Northeast United States under more than 2 feet of snow and left about 1.8 million people without power Monday. The early snow caused excessive damage because it accumulated on trees that had not yet lost their leaves, said CNN.com readers. Some pointed to climate change as the culprit and some called for an improved energy system.

Sparkster said, "Because the deciduous trees all still have their leaves and the snow was very heavy, we lost a ton of trees here in Pennsylvania. Never saw this many trees go down before due to a snowstorm, windstorm, or even ice storm. Every yard in my neighborhood either has one or more trees down or very large limbs hanging off their trees. Sad."

Surfstud31 said "Never seen or heard anything like it. I live about 30 miles north of NYC and we got more than a foot of snow with big tree limbs down everywhere. Could hear the limbs cracking and falling all over the place during the storm. Worse than Irene was."

Bassdude said, "I'm in the Hartford area, and we got nailed with almost 30 inches in some towns. It looks like a tornado went through most areas; whole trees collapsed under the weight of the snow because they all still have their leaves. The damage is way worse than the hurricane a couple of months ago."

WesInGA asked, "How many times does this entire region have to black out before we realize that decentralized renewable energy distributed at smaller localized levels is vital to our national security? Large, unsustainable, climate-change-contributing central grid systems will always be vulnerable. Our goal should be energy independence at the most localized level possible. It brings jobs to every community and prevents regional blackouts."

jaymirza said, "I have no doubt that this storm is one of the effects of global warming." MosinNagant1 said, "Oh, that's right. It is called climate change now. Any time the climate changes from a perfect 72 degrees it is humans' fault."

Thinking7 said, "I am amazed at how many people do not understand global warming and make fun of this theory. Our earth has a history of ice ages. It goes through cycles naturally. Humans are speeding up this process with all the pollution and deforestation, however. Global warming states that we are changing our earth's weather. We are seeing the extremes. Read up on it. NASA has a whole site dedicated to this climate change.

The shaping of a candidate: A look at Mitt Romney's faith journey

In the first of a series focusing on the faith of leading 2012 presidential candidates, CNN writer Jessica Ravitz investigated how Mitt Romney's Mormon faith and practices shaped him and his politics. Many CNN.com readers–identifying as Mormon and not–commended the story for its fairness, research, and clear writing.

trace said, "Good article. Gave me much more insight into Romney than any other article I've read so far. Thanks!" Chris Gagne said, "Wow! One of the few articles about Mitt and his faith that doesn't go off the rails on a crazy train in regards to explaining the doctrines of The Church of Jesus Christ of Latter Day Saints."

Devaclis said, "Excellent story, dedicated research, enlightening. Thank you for the solid journalism. Remember, this story was about one man, not about others like him or not like him. Focus on that and you may actually learn something from this article."

Taylor said, "As a practicing Mormon I've grown used to numerous 'standard' inaccuracies when reading any report about my faith. This article, however, is exceptionally fair and those beliefs spelled out were done fairly and accurately. My thanks goes out to Jessica Ravitz, the author of the article, for her efforts to paint the real picture."

Jacob said, "Very detailed article with a lot of research. The more I learn about Mitt the more I am surprised at how many little kindnesses he has shown to others. I honestly don't know how someone can work as a management consultant, serve as a volunteer in their church, and still have time to visit people in the hospital or put an entire company on hold for several days to look for someone's daughter. I get that he has offended some people, but honestly who hasn't?"

Other CNN.com readers asked why a nominee's faith was at issue. samvadi asked, "Is a politician's faith such a key factor in U.S. politics? I can understand economic persuasions can matter, but isn't faith/religion something deeply personal and divorced from the responsibilities of government offices?"

nightsun2k7 said, "Good god, more religion guiding politics. That's the last thing your country needs. How about the people just telling them what to do and they actually do it; there's a novel idea. Leave church and whatever god they believe in out of it."

Darrin asked, "How can people say a persons belief should not matter when running for president? Crazy beliefs lead to crazy decisions!"

Jeffrey Root said, "All religions are crazy, whether you believe that Moses received stone tablets from a bush or Joseph Smith received golden plates from an angel."

Jane said, "I worked for Mitt. I liked that religion (his or mine) was not an issue at work. He knows how to hire a good team and drive toward a goal. Whether that comes from talent or religion, I don't particularly care. What we need is someone with a vision to get us back on track."

tallulah13 said, "I don't give a rat's azz about the religion any of the candidates follow. All I want to know is A) Can they put the welfare of this nation ahead of that religion, and B) How exactly do they plan on reviving the economy and bring back living-wage jobs."

Romney Schromney said, "All I want to know is .... did his faith shape this week's positions or last week's?"