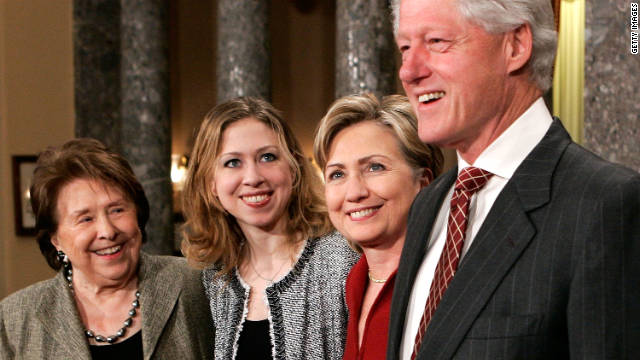 Rodham's death came a day after the State Department said Clinton had canceled a scheduled trip to Britain and Turkey because her mother was ill.

Rodham died in Washington surrounded by family, the Clinton Foundation said in a news release. Her illness was not disclosed.

The foundation called Rodham "a warm, generous and strong woman; an intellectual; a woman who told a great joke and always got the joke; an extraordinary friend and, most of all, a loving wife, mother and grandmother."

Rodham made occasional campaign appearances with her daughter during Clinton's unsuccessful Democratic presidential bid in 2008, and she helped the former first lady raise money to retire her campaign debt. She also made trips with the Clintons during their years in the White House, including a 2000 visit to India and a 1998 trip to China.

Hillary Clinton had been scheduled to attend a conference on Afghanistan on Wednesday in Istanbul, with a stop in London for talks with her British counterpart, Foreign Secretary William Hague, on the way.