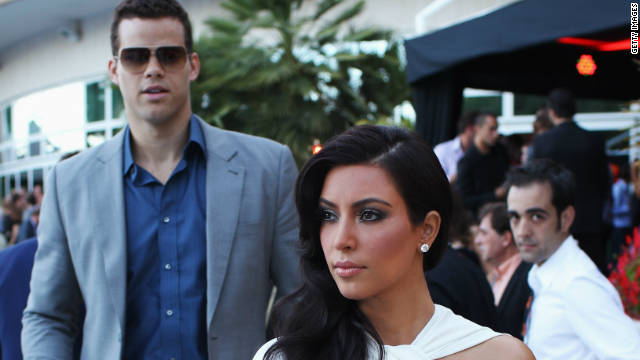 Overheard on CNN.com: Stop keeping up with the Kardashians

“This is what happens when your life is sponsored by E!” –KD

On Tuesday, Kim Kardashian filed for divorce from her husband of 72 days, professional basketball player Kris Humphries. Their wedding, which E! aired in a two-part special, cost a reported $10 million and netted the newlyweds $18 million. As news broke of the divorce filing, CNN.com readers heavily mocked the reality TV nuptials and had harsh words for what they see as a money-obsessed Kardashian clan.

Missy said, “Didn't see that coming, did ya! I wonder why it lasted so long! Lol”

Leslie said, “It lasted so long because they had to stay married until after it aired – duh!”

JW said, “They are such a joke. Let's stop keeping up with the Kardashian's and the world will be better! Contribute something good to the world.”

Genesis said, “I'm so tired of these ‘celebrities’ using marriage as a way to drum up publicity for themselves. They spend millions of dollars for a complete travesty of a relationship. That sure could have helped a lot of people who are struggling just to stay in their homes.”

FEED-UP! Said, “Unbelieveable! Millions upon millions of people are out here suffering and, for reality purposes, literally millions upon millions of dollars was spent on a wedding that lasted only TWO months. No wonder the world is in bad shape. The Kardashian's should be ashamed of themselves, especially Kim and her Mom for exploring the holy sanction of marriage just for TV."

A said, “I love how her ‘careful consideration’ only came AFTER the marriage. Methinks it should have come before. Ah the life of a celeb... "

Shirley said, “The whole thing is a circus and I can't believe I am commenting here. They will do anything to get news copy including the mom's latest on Simpson. Shame on her and Kim~"

Patti said, “I missed the over – under by just a few days. What an absolutely pathetic couple!”

Paul said, “This is so ridiculous. The American way.”

Don said, “This whole KARDASHIAN thing is a joke. Kim and her family are a joke. The public should drop them like a rock, don't but any of there crap, let them join the food line and certainly the back of the line in Vegas!”

Chrissy said, “What a joke .. so many charities and others could have really been helped with the money spent on that circus.”

Nora said, “I knew this Marriage was nothing more than a publicity stunt. Kim you should have to return all your gifts and please do us a favor and elope next time.”

Caseb said, “I’m hoping that now at least some people will wake up and stop wasting another minute on these superficial people, however, the odds are against that. If I never hear the name Kardashian again, I'll be the happiest man on earth.”

Stephanie Taylor said, “With people starving in the world, Kim had a 10 million dollar wedding, bought a 400k car and got a divorce in 70 days without telling her husband first? I was wrong about Kim K. I will never watch any of her shows again.”

Andy said, “FYI: reality TV isn't reality. Everything is calculated and every action is directed. This marriage/divorce plan was put in to effect over a year ago just to popularize this stupid family and make more money. ... No reality show is actually reality peeps.”

Y said, “I didn't think it was going to last. He was just a rebound from Reggie Bush.”

RL said, “I hope she has to return the $18 million she made off her wedding.”

PeaceHo said, “In this bad economy it was disgusting to see such an over-the-top and lavish wedding. Now that the marriage is history it is even more apparent how wasteful that $10 million was. Too bad the money wasn't better spent on, say, helping needy kids in Haiti, Somalia, or the Sudan. Too bad that money wasn't spent of helping people here in the U.S. who are struggling. What DO the Kardashians do ... other than spend money? How do they contribute to make society better?”

tmp1356 responded, “Many people did benefit from this wedding. Many people were hired to do catering, dress making, etc. Maybe not the ideal way to help, but she did spend money, which employed people, which helped the local economy...”