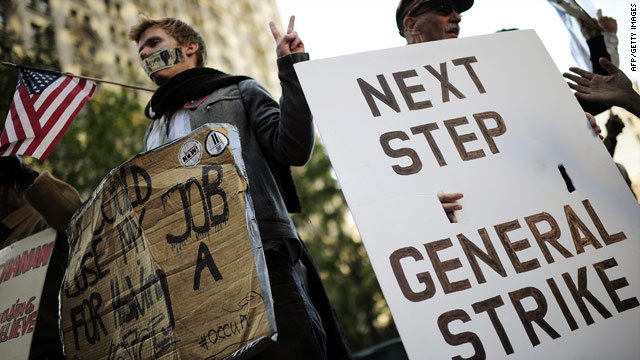 Overheard on CNN.com: OWS is already a success

“The movement is stimulating national discussion on important issues. It is a success … ” – evensteven

Without clear leadership and a specific set of demands, it may be difficult to deem the Occupy Wall Street movement a success. Jeffrey D. Sachs, an expert in economics, visited the Occupy Wall Street crowd in New York's Zuccotti Park early in October and says the key to long-lasting change will include electing officials representative of the 99%.

But many CNN.com readers said the movement is already a success, while others gave the specifics for what an OWS victory might look like. Other readers said OWS is already on the losing end.

PersonOfPallor said, “Since they have no tangible objectives, they will fail by definition.”

GeorgeBos95 responded, “Will fail? This is an ongoing failure.”

Steve said, “Actually the objectives are extremely clear to anyone who can read.”

U.S. Citizen said, “There are some specific preliminary objectives and grievances but it is still a work in progress. They weren't organized by corporate reps with money and specific objectives in mind like the Tea Party. Anyone who has half a brain and knows what's going on in this nation knows that their basic purpose is to protest corporate greed and control of our government (both parties).”

Steve said, “The dialogue about who pays what and whether or not it's a fair share is all over the news. That in itself is success, and just the beginning.”

GeorgeBos95 responded, “Yes, you're right. We have to get the word out that 47 percent of the people currently PAY NO FEDERAL INCOME TAX ... that the top 1 percent pay 40 percent of the tax and the top 10 percent pay 75 percent.
I think the top 10 percent are paying way too much and it's about time the 47 percent got off their butts and started producing like the rest of us. I'm not going to keep pulling the weight for the 47 percent. I'm sick of their whining.”

Crimsonsamurai said, “Success only needs to come in the minimalist form of finally declaring corporations for what they are, as a collection of individuals with common interests not as a separate but superior person, and not empowering them with the ability to further corrupt and degrade the political, financial, and cultural infrastructure of our nation.”

Middledocmom said, “There is already some success. The brave folks have given a voice to the silent majority who feel there is something seriously wrong with Congress. The movement provides hope. I sure hope that all that energy can be channeled into the traditional system where there is someone new to vote for.”

Brie responded, said, “That is the key, voting the old aristocracy out and the new in. That will not be easy especially if all we have are people sleeping in tents in parks. There has to be a better response and organized effort than that.”

Erik said, “An end to money buying elections (campaign finance reform); an end to lobbyists manipulating votes; an end to corporate greed taking precedence over the well-being of the 99%; an end to income inequality; a rise in upward social mobility; government-funded necessary social services, such as medical care, education, etc.”

Sleepwalker said, “I'd like to consider that it's already a success, because if nothing else, it has spurred ME to investigate deeper into what changes they are looking for, and decided for myself if those are in line with what I want for my future. They have challenged me to do more than simply say that 'it doesn't involve me' or 'it's not my problem.' Maybe I'm the only person who was motivated this way, but I'd like to think not.”

Angel said, “There will have to be people willing to run for the seats of senate and congress in line with OWS.”

RillyKewl said, “How do you spell success? CNN's headline (right above this one on front): Two more banks retreat on debit fees.”

Jonathan in Seattle said, “Success essentially is covered by FDR's un-ratified bill of rights addendum and more: 1) Employment for all; 2) Increased workers rights and quality of life – not against business interest, but to make better employees; 3) Food, housing, and healthcare guaranteed for all by employers and/or the government – paid for by business profits and taxes; 4) Free university-level education – paid for by business investment and taxes; 5) A shift of governmental priorities from corporate well-being to public well-being – businesses can fend for themselves in the free market, the government is meant to serve the people. That would be success for OWS in my mind."

Findings of a recent study appearing this week in First Monday, a peer-reviewed online journal, demonstrate that most underage kids on Facebook received help from their parents in creating an account.

So what do CNN.com readers think about the study? Some people defended the parents, saying it’s their right to choose for their children. Others said it’s wrong for parents to help their child break rules — especially if they are set up for the child’s protection.

ttony21 responded, “Well you're right to a degree, but technically it's not up to the parents if the site has a minimum age requirements as part of its terms of service. That's just the rules of the site itself.”

HJCihak responded, “More to the point, are these parents nuts? When someone tells me they're putting something on Facebook I ask them, ‘Would you put that information on highway billboard?’ Because you'd have a lot more privacy if it were only on a highway billboard!”

Sci1 said, “Yet, who do we blame when a child is bullied on facebook?”

vonspoo said, “My kid doesn't have a Facebook account. Why? Lots of reasons. Kids don't need one more dumb thing to distract them from homework. Kids don't need cyber bullying. Kids don't need to deal with the onslaught of creepy weirdos from the net. They aren't mature enough to handle it and even the most ‘mature’ ones are still as gullible as baby lambs. i see stuff on Facebook all the time that I wouldn't want my kid seeing and after seeing some of the garbage her same aged cousins post, no way.”

realist88 said, “I'm a teacher and am constantly overhearing Facebook conversations/dramas in the classroom. Bullying is amplified behind a computer screen, homework is neglected, girls are meeting older guys, drama goes to the big screen where everyone knows the dirt, and the parents? Non-existent; don't tell me they're monitoring this!”

JaxGrim said, “I really don't see the big deal if parent's are being responsible about it. My kids have Facebook accounts. The only friends on their accounts are family members. I have their privacy settings maxed out. They only used it to play Farmville or a couple of other games on occasion or send messages/pictures to grandparents and family. It is not like they are on it hours upon hours either. They used to get on maybe 15 minutes a day. However, they grew tired of it and have stopped using it. Again, its really not an issue if you are a responsible parent. If the parent is not responsible, then Facebook accounts are probably the least of their issues.”

Tr1Xen said, “My 8-year-old cousin is on Facebook because her parents lied and said she was 13. As long as the parents know about it, I don't really see what the big deal is.”

masquedx said, “As long as parents are aware of the account, have the password, keep an eye on friends and postings ... I don't really care if their 10-year-old is on.”

hesaidwhat2 said, “When the rules are arbitrary and outdated then you are simply teaching that you should always follow rules for the sake of following rules, regardless of fairness or logic. My 14 year old has a Facebook account that I closely monitor. My almost 13 year old does not, by her own choice. Frankly, it is better for a child to have a known monitored Facebook account than to have a hidden account you do not have access to.”

onlyonetime said, “I don't agree that the parents are being irresponsible. The parents have the final say, not Facebook. I let my son have one at 12 years old with several restrictions, knowing passwords, setting up their privacy settings, etc. That's my decision for my son. If Facebook changed their minimum age or allowed parents to have a say on whether or not children can set up a page, then this wouldn't be an issue.”

pugpugs said, “I helped my 11 year old create a Facebook page with severely strict conditions. I have all the passwords and only I know the password for the email associated with it. The privacy is set up so only her friends can see it and only her friends can find her. I check on it at least a few times a day. There's no way she can delete a Facebook conversation without me knowing, or do really anything without me knowing on the site. It's all about being a responsible parent.”

Do you feel your views align with these commenters' thoughts? Post a comment below, or sound off on video