More than 50 million Americans have already cast their general election ballots with a week and a half until Nov. 3ŌĆtwitter.com/i/web/status/1ŌĆ”rT

The US Mission in Turkey urged US citizens "to exercise heightened caution" after receiving reports of a potentialŌĆtwitter.com/i/web/status/1ŌĆ”kh

RT @CNNPolitics: Pres. Trump and Joe Biden clashed over how more than 500 children should be reunited with their parents after they were seŌĆ” 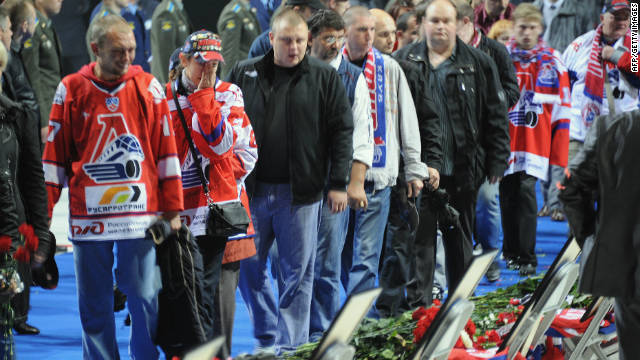 People mourn victims of the crash during a memorial ceremony in Yaroslavl, Russia, on September 10.
November 2nd, 2011
03:23 PM ET

Forty-four people, including crew members and dozens of international and Russian players with the Yaroslavl Lokomotiv hockey club, died as a result of the September 7 crash outside Yaroslavl, Russia. A crew member is the sole survivor.

The club, which included several former National Hockey League players, was bound for Minsk, Belarus, where the team was to play the next day.

One of the pilots appears to have inadvertently pressed on a brake pedal while pulling on the control yoke during takeoff, said Alexey Morozov, chairman of Russia's Interstate Aviation CommitteeŌĆÖs technical commission.

Because of the braking, the Yak-42 plane didnŌĆÖt have enough speed at takeoff, Morozov said, according to RIA-Novosti.

The aircraft collided with the antenna of an airport beacon, fell to the ground and broke into several pieces and caught fire, the nationŌĆÖs aviation ministry told CNN in September.

The plane was in good order, and ŌĆ£no failures in the operation of the airplane and the engines were found,ŌĆØ Morozov said, according to the state-run Itar-Tass news agency.

The IAC, which investigates aviation accidents in nations from the former Soviet Union, determined that a lack of pilot training was one of the factors that contributed to the wreck, RIA-Novosti reported.

The IACŌĆÖs report will be taken into account in a criminal investigation into who bears responsibility, Russian Investigative Committee spokesman Vladimir Markin said Tuesday, according to the nongovernmental Moscow-based Interfax news agency.

Some of those on Lokomotiv Yaroslavl's roster had ties to the National Hockey League, which has teams in the United States and Canada. The former NHL players included Pavol Demitra, a former Minnesota Wild and Vancouver Canucks center from Slovakia, and Josef Vasicek, from the Czech Republic, who had played with the New York Islanders and Carolina Hurricanes. Another Lokomotiv player, Ruslan Salei from Belarus, had skated for the Anaheim Mighty Ducks, Colorado Avalanche and Detroit Red Wings.

Yaroslavl Lokomotiv head coach Brad McCrimmon, a Canadian who also died in the crash, also had played in the NHL and had been a Red Wings assistant coach.

One of the 44 who died, hockey player Alexander Galimov, survived for days but eventually died of severe burns, according to a hospital that treated him.

The US Treasury Department has announced sanctions on a Russian government research institution linked to a malwareŌĆtwitter.com/i/web/status/1ŌĆ”ZS
cnni

5:32 pm ET October 23, 2020 RETWEET
The family of a University of Washington professor who recently went missing during a hiking trip is pleading thatŌĆtwitter.com/i/web/status/1ŌĆ”gb
cnni

5:12 pm ET October 23, 2020 RETWEET
Drugmaker AstraZeneca will resume the trial of its experimental coronavirus vaccine in the United States, which hasŌĆtwitter.com/i/web/status/1ŌĆ”SN
cnni

4:08 pm ET October 23, 2020 RETWEET
If you thought giant "murder hornets" had disappeared because they dropped from the headlines, you are mistaken. EŌĆtwitter.com/i/web/status/1ŌĆ”un
cnni