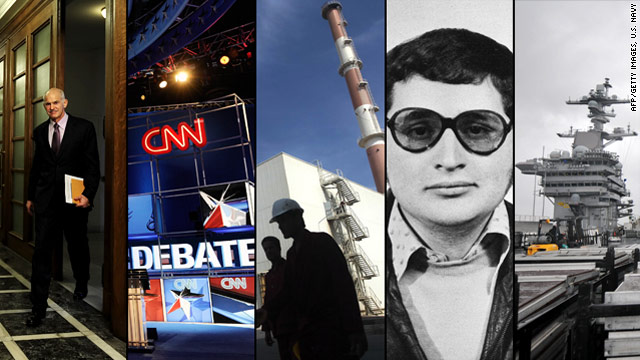 A shuffle of Greece's government and questions over how it will deal with its debt – which could drag down larger European economies - will be in a spotlight this week as the country's prime minister prepares to resign. Here is a look at this and some other stories CNN plans to follow this week.

Greek Prime Minister George Papandreou is expected to resign this week after the makeup of a new coalition government is decided. He narrowly won a confidence vote last week after announcing he would seek a new government, and he's agreed to resign - after talks with the opposition - on the condition that a controversial 130 billion euro bailout deal is approved.

Papandreou found himself in turmoil when he announced he would put a European bailout package for his country - a deal that would slash half of Greece’s 100 billion euro debt - to a referendum. He later backed off the referendum, and he says implementing the package is a priority, but the fate of the deal still isn’t clear.

The bailout deal, reached October 26, comes with strings that would require Greece to slash government jobs, privatize some businesses and reduce pensions. If Greece ever were to decide it doesn’t want to meet those conditions, it could decide to default.

END_OF_DOCUMENT_TOKEN_TO_BE_REPLACED

A 60-year-old woman on Sunday became the third person to die as a result of a helicopter crash last month in New York's East River, said a spokeswoman for the city's medical examiner's office.

Harriet Nicholson was pronounced dead at approximately 3:22 a.m. Sunday at Bellevue Hospital, said Ellen Borakove from the office of the chief medical examiner.

After an autopsy, officials determined that she died due to "respiratory complications of near-drowning," according to Borakove.

Nicholson was among those on board a Bell 206 Jet Ranger that plunged into the water on October 4, moments after pilot Paul Dudley had radioed that his aircraft was experiencing problems, National Transportation Safety Board member Mark Rosekind said last month.

Armed men burst into a newspaper office in eastern Mexico Sunday, warning staff before they set fire to the building, the newspaper's editor said.

No one was injured in the ensuing blaze, which damaged the inside and outside of El Bueno Tono ("The Good Tone") newspaper in Cordoba, Veracruz, editor Julio Fentanes told CNNMexico.

"They broke windows outside and inside the building," he said. "They came armed with all kinds of weapons, with pipes, with any number of things."

Workers hid in the back of the building during the early-morning incident, he said.

Veracruz state government spokesmen said a container with 10 liters of gasoline was found at the scene.

Greek Prime Minister George Papandreou will step down as his government's leader, the country's president announced Sunday night - agreeing to do so on the condition that the controversial 130 billion euro bailout deal is approved.

The announcement follows a meeting on Sunday in which Papandreou and Antonis Samaras - the leader of the New Democracy party, Greece's leading opposition party - agreed to form a new government.

The two will meet again Monday to discuss who will become the nation's next prime minister as well as who will serve in the new government, according to the statement from President Karolos Papoulias.

No more details or a timeline of future events were disclosed, beyond that new national elections will be held sometime after the bailout is implemented. Earlier Sunday, Samaras told reporters that once Papandreou resigns everything will "take its course" and "everything else is negotiable."

New York City's annual tradition didn't disappoint this year, as a man from Kenya and a woman from Ethiopia won their respective divisions Sunday in the ING New York City Marathon, with Geoffrey Mutai setting a new course record - cutting nearly three minutes from the previous one.

Mutai finished at 2:05:06, according to the official website for the race, breaking the old record of 2:07:43 set by Ethiopia's Tesfaye Jifar in 2001, the website said.

Firehiwot Dado, 27, won the women's division in her first running of New York's marathon, with a time of 2:23:15, the website said.

Mutai, 30, also won the Boston Marathon in April, with a world record time of 2:03:02. That record is not recognized internationally, however, as the day's strong tailwinds and the course's incline drops fall outside of the International Association of Athletics Federations' record-setting regulations.

The death toll from Thailand's worst flooding in half a century reached 506 Sunday, as flood waters inched toward downtown Bangkok, the interior ministry said.

By Sunday, authorities ordered evacuations for residents in eight of Bangkok's 50 disctricts.

Across the country, the flooding - now in its third month - has affected 25 of Thailand's 64 provinces.

Bangkok's central business district is still dry but other parts of the bustling metropolis of 12 million people are inundated.

Floods are an annual occurrence in the country but it has been particularly acute this year.

A 5.6-magnitude earthquake struck central Oklahoma late Saturday night - the largest to hit the state since record-keeping began.
The quake struck 4 miles east of Sparks in Lincoln County at 11:53 p.m. ET, the United States Geological Survey said.
There were no immediate reports of damage.
It was the same area where a 4.7-magnitude quake struck at 3:12 a.m. ET Saturday. By 8 a.m., geologists had recorded more than 30 aftershocks from it.
The strongest quake previously reported was of magnitude 5.5 on April 9, 1952, according to the Oklahoma Geological Survey.

What is usually a time of comity and celebrations was marked by gunfire and protests in Syria on Sunday as residents ushered in the first day of the Muslim holiday, Eid al-Adha.

In Aleppo, Syria's largest city and the country's economic center, residents took to the streets in anti-government protests after the morning Eid prayers, according to the the Local Coordination Committees of Syria - a network of opposition activists.

In the southern city of Daraa, where the unrest started in March, security forces fired in the air to disperse crowds and prevent them from demonstrating after prayers, the group said.

And in Arbeen, a suburb of the capital Damascus, government forces set up barricades and maintained a heavy presence, it said.

Eid al-Adha, which commemorates the Muslim prophet Ibraham's willingness to sacrifice his son for God, is one of two major holidays in Islam. The other, Eid al-Fitr, marks the end of Ramadan, when Muslims fast from dawn to dusk.

In ordinary times, the occasions are marked with joyous community prayers, acts of charity, visits from far-flung relatives, gift-giving and elaborate feasts.

But Syria is in the midst of a nearly eight-month uprising that started with calls for elections and an end to abuses by security forces, but turned into widespread calls for the ouster of President Bashar al-Assad.

The NBA is giving the players' association until Wednesday to accept a deal over a new collective bargaining agreement after the two sides met for eight hours over the weekend.

The Saturday meeting was the first in eight days for the NBA and the National Basketball Players' Association after discussions broke off last month.

NBA Commissioner David Stern said the new proposal gives players between 49% and 51% of revenues. But the players' association rejected it.

"I think it's fair to say that, speaking on behalf of the union, (players' association lawyer Jeffrey) Kessler rejected the mediator's recommendations and our proposal," Stern told reporters early Sunday morning. "But hope springs eternal and we would love to see the union accept the proposal which is now on the table."

If the players' association does not change its mind by Wednesday, the NBA will offer up another proposal - one that offers players 47% of basketball revenues.

"We hope that this juxtaposition will cause the union to recess its position and accept the deal," Stern said.

Authorities have issued an arrest warrant for former Dallas Cowboys player Terrell Owens after he failed to show up for a child support hearing last month.

The free-agent wide receiver tried to reschedule the October 24 hearing in order to attend an NFL workout to help secure a contract, his spokeswoman said Saturday night.

He is "deeply upset that anyone would misconstrue his nonappearance in court," Diana Bianchini said.

At the time, Owens did not have representation, but his new attorneys are working to resolve the "no show" court date, she said.

Owens has been nursing a knee injury after surgery, and currently has no income, according to the spokeswoman.

He supports his four children based on his 2007 Cowboys annual income of $11 million to $12 million, which has not been modified to reflect his current situation, she said.

LSU won the coin toss in overtime, electing to start on defense. The Crimson Tide's offense sputtered in the extra session with two incomplete passes, a penalty for having 12 men in the huddle and a 5-yard sack.

After that, LSU marched down the field, nearly scoring a touchdown but running back Michael Ford stepped out of bounds.

The game, before a Bryant-Denny Stadium crowd in Tuscaloosa, mainly witnessed field goals and punts. Neither team scored a single touchdown.