President Biden has been officially cleared to emerge from isolation after a second negative test following a rebouâ€twitter.com/i/web/status/1â€¦KF

President Biden has tested negative for Covid-19 but will remain in isolation pending a second test, his physicianâ€twitter.com/i/web/status/1â€¦VC

Actress Anne Heche is in critical condition after crashing her car into a house in Los Angeles and suffering severeâ€twitter.com/i/web/status/1â€¦Bq

A Texas jury has decided to penalize Alex Jones with $45.2 million in punitive damages in a lawsuit filed by the paâ€twitter.com/i/web/status/1â€¦u8

Kevin Spacey will have to pay almost $31 million to Media Rights Capital, the production company behind "House of Câ€twitter.com/i/web/status/1â€¦HQ 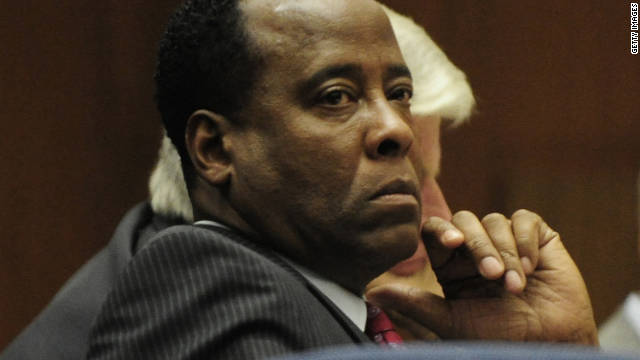 Overheard on CNN.com: Murray was a scapegoat

"Justice has been served. Assisting a self-destructive man in destroying himself is a crime."–TonyWestover

Dr. Conrad Murray was found guilty of involuntary manslaughter in the death of Michael Jackson. The prosecution, in closing arguments on Thursday, argued Murray was responsible for Jackson's death because his reckless use of propofol to treat Jackson's insomnia in his home was criminally negligent.

Many CNN.com readers said Murray was a scapegoat, but others disagreed. Before the verdict was announced, Bremen said, "Whether he is innocent or not, I would almost bet this man is gonna be found guilty. When people like Michael Jackson die like that, someone is taking the blame, no matter what the case."

bjj said, "Jackson was a propofol addict for years, according to his plastic surgeon, and Murray was his doctor for two months? I find it hard to believe he was convicted. This is sad."

foxxyredd28 said, "I disagree with the verdict! Dr. Murray only did what MJ really wanted him do. However he did violate medical codes and deserves to lose his license, but I feel he should not have to go to jail. I love Michael Jackson, but truth is he was a drug addict and he was going to die from drugs regardless whether it was Dr. Murray or whoever!"

AndyDaniel said, "Definitely a tough call for me. Negligent, probably, but criminally so? That's tougher. Murray obviously did not want Jackson to die. Did Murray push the boundaries of safety because he didn't want to be fired by his world-famous client? Possibly."

But lajmh said, "As a professional in the medical field, Murray knew that this drug was only used in hospital. If Michael insisted - for whatever reason - then Murray should've had Michael admitted to hospital for the insomnia."

fred72202 said, "Dr. Murray acted unethically and should at least lose his medical license and probably do jail time. It is a sad tragedy. The drugs given were not appropriate, and the equipment andÂ staff that should have been there when those drugs are in use were not there. Gross negligence."

pel11 said, "Guilty of abusing his medical license. What a disgrace to the medical profession."

The American dream may have gone pear-shaped, if new numbers on median net income are any indication. The gap in median net worth between young and old has increased to 47 to 1, up from 10 to 1 in 1984, according to analysis by the Pew Research Center. Households headed by people 65 and older were compared to those headed by people 35 and younger.

CNN.com readers argued over who was at fault. driven1420 said, "If younger people would save money instead of spending on the latest iPad, iPhone or other device, they would have more money. Older Americans learned early on it was more important to save than spend."

dallaslib said, "A 'can do spirit' just doesn't cut it anymore. If the older generation insists on believing that they have something that we don't, please, PLEASE keep your mouth shut. We're busy trying to sort this mess you made."

iPhonefanboi said, "It's OK cause we the young people can work for at least 60 years as long as we don't get fired and no kids. Kids are too expensive for young couples. I am getting aÂ vasectomy."

SLBoston said, "The American dream is still alive and well if you are smart about it. If you get a degree in most humanities courses or other worthless subjects, you're not going to have a job. If you have a degree in the medical field, virtually any science, engineering, accounting, etc, you will probably find a job fairly easily."

Fdf Fdfhfghg said, "Not enough jobs. Too many gone to China and automation. People at the top paying themselves too much. Economic bubble shrinking. Bad schooling and parenting/too many anti-intellectuals. Free trade and pure capitalism failed."

tellnolies said, "Higher education costs were far, far lower 25 years ago, and a smaller percentage of high school grads went on to college because a degree wasn't as necessary back then to land a decent paying job as it is now."

FreeWillzyx5 said, "The first half of the baby boomers and the tail end of the generation before them had it better than any other in American history in terms of economic conditions. The young people I see tend to work their asses off just to keep from drowning, because the baby boomers climbed the ladder and pulled it up behind them."

US travelers may be rejoicing that a night out in Rome that once cost $100 now costs about $80, but it's a more comâ€twitter.com/i/web/status/1â€¦M6
cnni

1:30 pm ET August 7, 2022 RETWEET
A bipartisan pair of senators has called on the Biden administration to designate Russia as a state sponsor of terrâ€twitter.com/i/web/status/1â€¦R3
cnni

10:30 am ET August 7, 2022 RETWEET
Archie Battersbee, a 12-year-old British boy, at the center of a long legal battle between his parents and doctorsâ€twitter.com/i/web/status/1â€¦5b
cnni

2:26 pm ET August 7, 2022 RETWEET
President Biden has been officially cleared to emerge from isolation after a second negative test following a rebouâ€twitter.com/i/web/status/1â€¦KF
cnnbrk

9:09 am ET August 7, 2022 RETWEET
President Biden has tested negative for Covid-19 but will remain in isolation pending a second test, his physicianâ€twitter.com/i/web/status/1â€¦VC
cnnbrk

10:40 pm ET August 5, 2022 RETWEET
Actress Anne Heche is in critical condition after crashing her car into a house in Los Angeles and suffering severeâ€twitter.com/i/web/status/1â€¦Bq
cnnbrk